The Warriors Have Yet to Pay for Oakland's Championship Parade

City officials say they're still in talks with the sports team about parade-related costs.

Even before the Warriors clenched this year's NBA Championship, the city of Oakland was preparing for a massive celebration.

Numerous city workers installed barriers along the winding parade route through the downtown and around one side of Lake Merritt, and hundreds of Oakland police officers signed up to work overtime to provide security for an estimated one million fans.

And Warriors owner Joe Lacob promised Oakland that the sports team would pay for the costly celebration.

But after 54 days of trying to confirm whether or not the Warriors reimbursed the city for its numerous expenditures on the parade, the Express confirmed on Wednesday that the team hasn't yet paid.

"No payment has yet been made to the City," wrote Karen Boyd, spokesperson for Oakland's city administrator. Boyd said that the city is still "in conversation with the Warriors about parade-related costs."

The Warriors did not respond to repeated email and telephone requests to discuss the parade expenses incurred by the city. 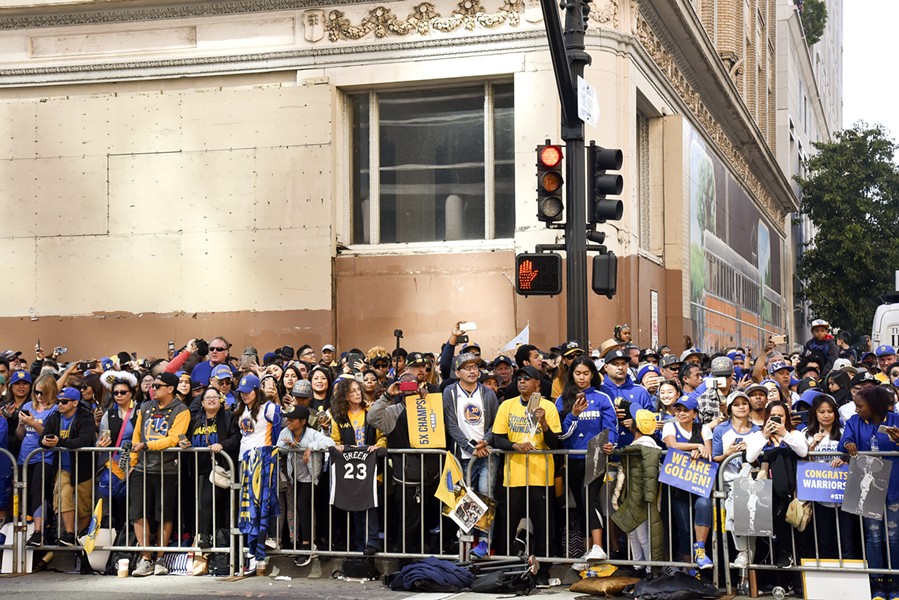 The Express filed a Public Records Act request on June 15 (the day of the parade) seeking information about how much the celebration cost the city, as well as any invoices submitted by Oakland to the Warriors, and copies of any payments the team has made to the city.

But according to the city, no such records exist.

The Oakland Police Department, however, provided records showing that 444 police officers worked overtime to provide security for the parade. It's unclear how much this extra police staffing cost taxpayers, but officers are paid 1.5 times their normal rate when working overtime.

The starting salary for an Oakland cop is more than $70,000, or about $33 per hour. So, a conservative estimate is that police security alone for the six-hour event cost more than $134,000. However, the total could be much higher because the average Oakland officer earns well above the department's starting pay.

Other city departments also incurred costs. Around 100 public works employees set up and broke down eight miles of barriers and had to sweep up confetti along the entire route using twelve street sweepers.

City officials have claimed that the celebrations are worth more than they cost because hundreds of thousands of visitors spend at local businesses like restaurants and stay in hotels, generating tax revenue. But Oakland has not attempted to gauge the economic impact of the Warriors parade and has no records measuring increased revenues, according to the city's finance department.