Thursday’s Briefing: McClymonds Water Tainted With Lead; 2017 Could Be Worst Salmon Season Ever 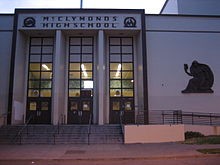 1. The water at McClymonds High School in West Oakland is tainted with unsafe levels of lead, a severe toxin, reports George Kelly of the East Bay Times$. Oakland public school district officials blamed the lead problems, which can harm brain development in young people, on old fixtures and plumbing. The school has replaced some old faucets, but replacing water pipes could cost $2.3 million and more than a year to complete.

2. The price of once plentiful California king salmon has soared to $30 a pound and has become a luxury item during what might be the worst salmon fishing season in history, reports Tara Duggan of the San Francisco Chronicle$. The current population of king salmon, also known as chinook salmon, was born during the drought when the lack of Northern California river water caused mass die offs.

4. UC Berkeley climate change expert Daniel Kammen resigned from his science envoy position with the Trump administration in a letter in which the first letters of each paragraph spelled out IMPEACH, reports Jenna Lyons of the San Francisco Chronicle. Kammen expressed disgust with Trump’s hate-filled rally this week in Phoenix, Ariz.

5. Bigots plastered Kehilla Community Synagogue on Grand Avenue in Piedmont, on the Oakland border, with racist hate-speech stickers, reports Linda Davis for the East Bay Times$. Police are investigating the vandalism at Kehilla as a possible hate crime.

6. The National Park Service gave final approval for a white supremacist rally at Crissy Field in San Francisco on Saturday, despite requests from local political leaders to cancel the event because of public safety concerns, reports Casey Tolan of the Bay Area News Group$. Park service officials said they could not deny a permit for anyone planning to exercise his or her First Amendment rights.

7. The California Supreme Court is scheduled to rule today on whether to speed up executions in the state, as voters requested when they passed Proposition 66 last November, the Associated Press reports.

8. And state lawmakers are considering legislation that would establish the first-ever tax on water in California, reports Katy Murphy of the Bay Area News Group$. Proceeds from the tax would be used to fix hundreds of public water systems with unsafe drinking water.