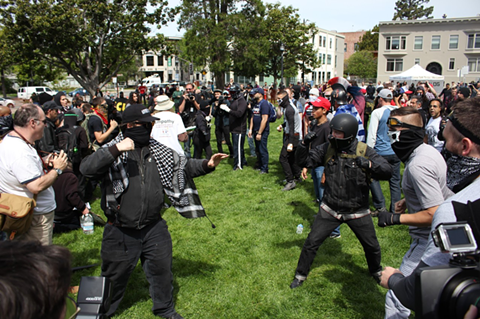 1. Bay Area law enforcement agencies are bracing for possible violence at this weekend’s planned white supremacist rallies in Berkeley and San Francisco, the San Francisco Chronicle$ reports. Hundreds of police officers are expected to be on hand for the rallies and anti-fascist counterprotests scheduled for San Francisco’s Crissy Field on Saturday and in downtown Berkeley on Sunday.

2. President Trump threatened to shut down the federal government if Congress refuses to fund his controversial plan to build a giant wall on the Mexican border, the Washington Post$ reports. But Trump’s agenda appears to be in serious trouble because he has been feuding with GOP Senate Majority Leader Mitch McConnell. The New York Times$ reports that the two are no longer on speaking terms after Trump harangued McConnell for not blocking the Russian collusion investigation.

3. Some Piedmont residents are calling on Mayor Jeff Wieler to step down from his position because of alleged bigoted comments on Facebook, reports Linda Davis for the East Bay Times$. Resident Conna McCarthy, daughter of the late former state Lt. Governor Leo McCarthy, said Wieler posted on Facebook: “Black lives matter encourages cop killing” and “Transgenders are mentally ill.” Wieler said he couldn’t remember the exact wording of his posts, but acknowledged having different views from those of McCarthy.

4. California’s latest cap-and-trade auction was wildly successful, with nearly $1 billion in pollution credits being sold, reports Dale Kasler of the Sacramento Bee$. The funds raised by the auction can be used for green energy programs and reducing greenhouse gas emissions in the state. Previous auctions had been disappointing because of uncertainty over the fate of cap and trade, but that changed after Gov. Brown and the legislature agreed to extend the climate change program until 2030.

6. BART has delayed the planned opening of its new Milpitas and Berryessa stations in Santa Clara County until sometime next year, reports Michael Cabanatuan of the San Francisco Chronicle. The new stations were scheduled to open by the end of 2017.

7. And former Oakland solar company Sungevity announced that it "has merged with another California solar giant, Horizon Solar Power, to create the state’s second-largest residential solar company,” reports Riley McDermid of the San Francisco Business Times$. The merged entity’s headquarters will be in the Southern California city of Temecula.