White Nationalists Plan Yet Another Brawl in Berkeley 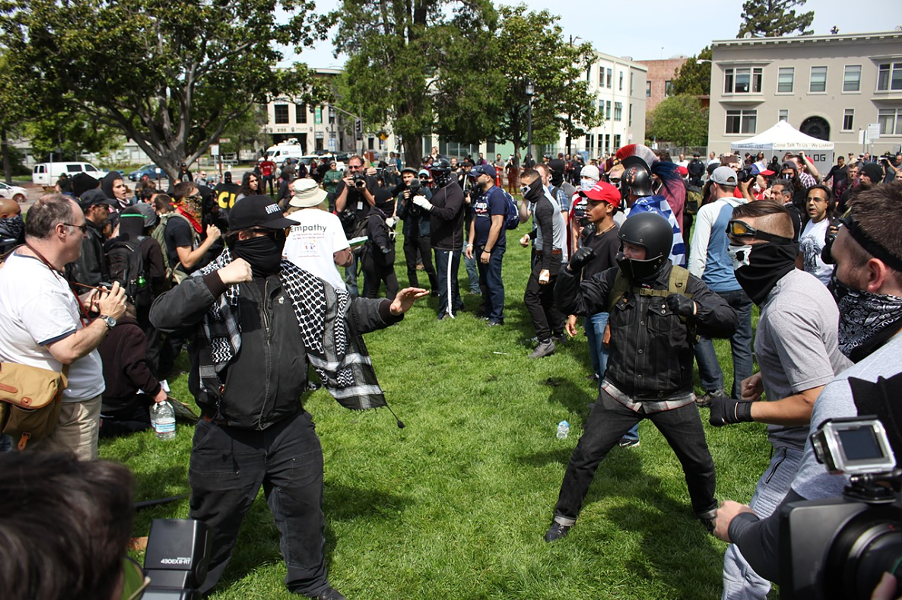 In the wake of deadly clashes in Charlottesville, Virginia, a coalition of neo-Nazis, white nationalists, alt-righters, and white supremacists are returning to Berkeley with the stated purpose of provoking street fights.

The groups, which also include fascists, Islamophobes, homophobes, Trump supporters, anti-semites, xenophobes, conspiracy theorists, and other bigots and reactionaries are converging for a demonstration on August 27 called "No to Marxism in America," which, according to the event's Facebook page is a "chance to speak out and expose the plan of purging our nation from a free nation to a communist nation."

Berkeley has become a symbolic target of protest for the far-right because of its Free Speech Movement history and liberal reputation.

Previous right-wing rallies in April turned violent as anti-fascists clashed with racists in the streets, resulting in numerous arrests.

Among those who say they'll attend the August 27 rally is Kyle "Based Stickman" Chapman, a self-described nationalist and member of the far-right Proud Boys group who complains that there is a "war on whites." Chapman has been arrested for battery at previous white supremacist rallies in Berkeley, but he has yet to be charged with any crime in relation to these events, according to court records.

Several days ago, Chapman tweeted eagerly about the "Battle of Berkeley 3," including a soundtracked motivational video that shows white nationalists and Trump supporters fighting counter-protesters.

The man arrested and charged with murder and malicious wounding, James Alex Fields Jr., attended the Unite the Right rally and according to The New York Times, had expressed racist views in the past.

Chapman didn't respond to a Facebook message seeking more information about his group's plans in Berkeley.


Other members of the Proud Boys Bay Area group plan to attend to the Berkeley protest.

The group's members advocate violence in the streets to advance an agenda of "Western chauvinism."

Sergeant Andrew Frankel of the Berkeley Police Department told the Express that BPD is aware of a number of different rallies planned for August 27, from different political perspectives, and that BPD plans to "staff accordingly."

"We realize there are potentially a number of people coming to fight," said Frankel.

He confirmed that no organization or person has yet applied for an event permit with the city.

Frankel also said that BPD will likely continue to use the same tactics it has at previous protests.

"We’ve attempted to be surgical," he said. "We’ve taken action at a time when it’s not going to jeopardize the safety of other people who are there expressing their first amendment rights."

But Frankel added that BPD has multiple ongoing investigations into violence at the previous protests and that video and other evidence is still being analyzed to identify perpetrators.