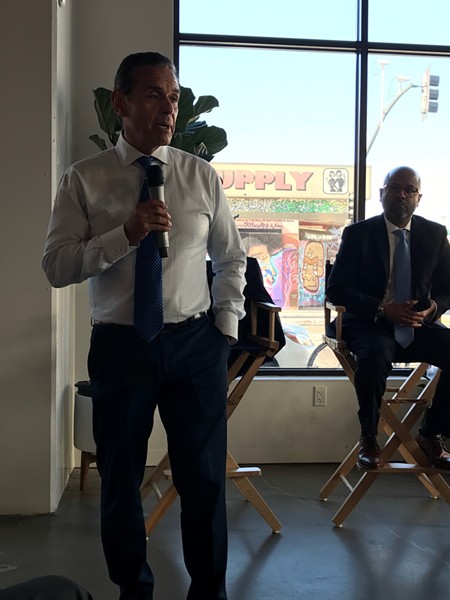 The primary campaign for California governor might be a year away, but one candidate is already traveling around the state chatting up likely voters.

Villaraigosa is a second-generation Mexican-American whose grandparents immigrated from Guanajuato. "I went to UCLA thanks to the affirmative action" he told the crowd. “We gotta give people a shot, we gotta educate our kids,” he said.

Education policy ended up dominating the discussion. Villaraigosa emphasized that if elected governor, one of his main focuses is going to be improving California's education system. He said that no kid should be denied acceptance into college, and that there's a need to build more CSU’s in underserved areas like Stockton.

But being the Bay Area, the candidate was asked about pot, immigration, and other hot topics.

Alameda Mayor Spencer asked how, if elected governor, Villaraigosa planned on addressing the issue with cannabis businesses that still can't bank due to federal drug policy.

"Cannabis is going to be the new alcohol business," Villaraigosa replied. "The banking issue is complicated, and it's even more complicated with Sessions and the Trump Administration challenging everything we try. But I’m willing to work with the industry and see what we can do."

East Bay resident Evelyn Torres asked Villaraigosa about the possibility of expanding healthcare access in California, possibly through a state-run single payer system, which could include undocumented immigrants. "Healthcare is a right not a privilege," Villaraigosa said, adding "undocumented people deserve healthcare. As a general proposition, I would be for it."

Housing was another hot topic. Villaraigosa was pressed on the issues of affordable housing and homelessness.

Villaraigosa said he wants to implement a housing and transportation trust fund that would reward cities and counties for doing the right thing for affordable housing and housing for homeless people. "Focus on density bonus, parking variances that allow [cities] to build more housing along transportation corridors and downtown," he said. "Reward them for expediting affordable housing."

Oakland Councilmember Gibson McElhaney wanted to know how Villaraigosa would do to address environmental justice issues and lack of representation for Black and Latino communities on crucial regulatory boards and commissions.

Villaraigosa said that as governor, he would aim to create green jobs.

On immigration, Villaraigosa said, “California is taking a different path," than the Trump administration.

"We’re not gonna deport, we are not going to deny our DACA kids an education, and our cops are not trained to be ICE agents, and their number one [priority] is to protect us against crime, not go along ICE agents."

"There’s going to be a lot of noise around this election," he said. "The more the better. I tell people, if there’s noise, if there’s tension. I expect that I am going to be the next governor of the state. I’m going to mobilize a group of people that typically don’t vote in big numbers, and they are going to wake up. I want to wake them up."