Oakland Has a New Two-Year Budget, but Only After a Night of Divisive Infighting 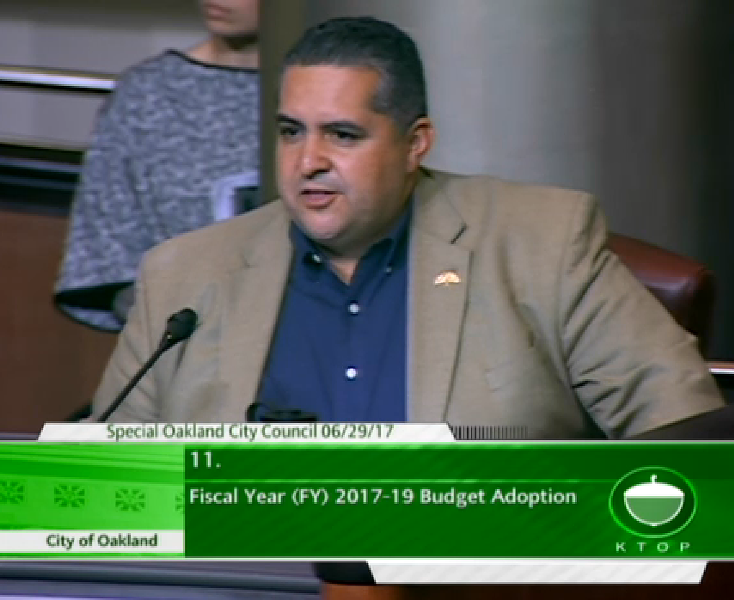 Late Thursday night, the Oakland City Council approved the city's new 2017-2019 budget, but only after a week of polarizing debate.

The council attempted to pass a budget earlier this week, but members of the public disrupted the Monday night special meeting, forcing the city to reschedule.

Throughout this year's budget negotiations, councilmembers Desley Brooks, Rebecca Kaplan, and Noel Gallo have formed one bloc of votes pushing for a budget that cut into spending priorities of Mayor Libby Schaaf. They also sought to cut a third police academy while providing more money for homeless services and housing programs. In addition, Gallo wanted to increase spending on illegal dumping cleanup crews.

On the other end, Council President Larry Reid's budget is closer to the mayor's priorities. It also includes funding for positions in a new department of violence prevention (although the council has yet to actually establish this department). Councilmembers Abel Guillen, Annie Campbell Washington, and Lynette Gibson McElhaney have supported Reid's version of the budget.

More information about their different budget proposals is available here.

All of the councilmembers' proposals were, in fact, very similar. But for hours, members of the public commented that there should be further cuts to the police department, and more money for housing and homeless services, and increased compensation for city employees. Other speakers implored the council to save specific programs from the chopping block.

The evening almost came to an end without passing the budget.

Normally, only five votes are needed to finalize the city's spending plan, but because every proposal relied on one-time expenditures, six votes were necessary.

Kalb sided with Reid and the rest of the council after his various amendments were incorporated into the majority's plan.

Gallo, Kaplan, and Brooks stated that although they were in the minority, they would vote against Reid's budget, leaving the council president's side with only five votes.

Facing a June 30 deadline to pass a balanced budget, it was unclear how the council would move forward.

But Councilmember Guillen used a surprise procedural tactic. He proposed cutting $1.5 million from a fire academy, $350,000 from a police academy, and $350,000 from illegal street dumping cleanup teams to trim one-time expenditures by $2.2 million.

"We are removing one time funds from the budget so as to not require six votes, we only require five votes," Guillen explained of his proposal.

Councilmember Brooks protested this tactic and claimed it was against the rules because Guillen's proposed modifications hadn't been costed in advance. She argued the council couldn't be sure what the fiscal impacts would be.

After disruptions from members of the public, and a short recess, followed by warnings from Reid that he would use the police to clear unruly people from the chambers, the council quickly voted to pass Reid's budget and then adjourned the meeting.

Brooks did not vote. Kaplan and Gallo voted no. The other councilmembers approved of Reid's budget modified by Guillen's amendments.


Correction: The original version of this article stated that Guillen's amendments to the final budget required cutting a police and fire academy. This was incorrect. Guillen removed $350,000 from from funds for police academies, and cut $1.5 million from funding for fire academies from the Council President's budget.