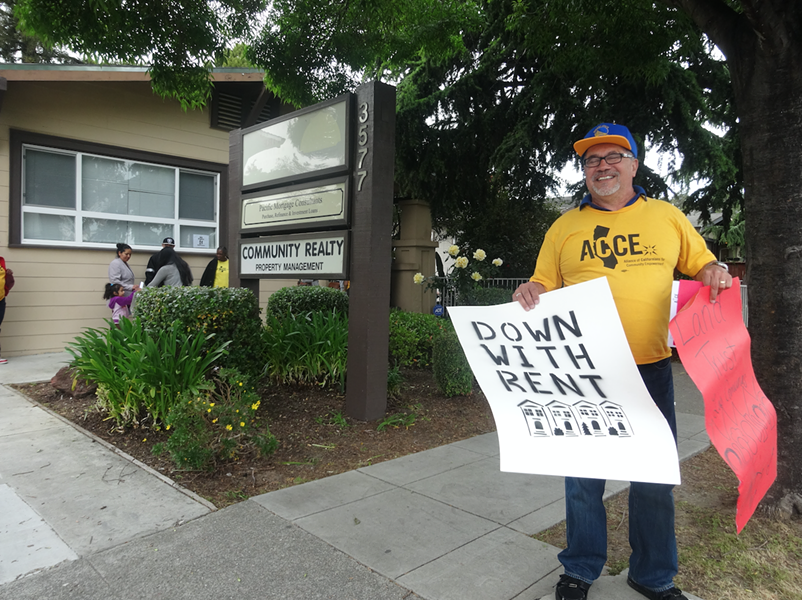 Former tennis pro-turned real estate investor Douglas Ditmer testified in federal court today that one of the East Bay's biggest landlords, Michael Marr, was a key player in a massive scheme to rig foreclosure auctions between 2008 and 2011.

Marr's company, Community Realty, currently owns about 280 houses and small apartment buildings in Alameda County, according to public records. About 90 percent of these homes are located in Oakland. Many were obtained at foreclosure auctions.

Ditmer admitted to participating in a conspiracy involving numerous investors who suppressed bidding on foreclosed homes at public auctions. The investors would later divvy the properties up at private auctions and pay each other kickbacks.

Although Ditmer already pleaded guilty, he is cooperating with the government in hopes of obtaining a more lenient sentence.

On the stand, Ditmer said Marr and his employees were frequently at the auctions, held on the steps of the Rene C. Davidson Courthouse in Oakland and the courthouse in Martinez, and that they participated in the bid rigging.

"There was a group of us that would cease to bid at the public auction, deliberately," Ditmer explained. "Then we would hold our own separate auction, called a round, and we divided the profits from these secondary auctions among ourselves."

By simply nodding his head at another bidder, Ditmer claimed he could drop out of a public auction for a specific property with the agreement to bid on it later in a private round.

The government contends that by agreeing to not bid against each other and cutting short the public auction, the investors could reduce the final price tags on properties. This cheated banks and taxpayers, as well as people who were participating in the foreclosure auctions but weren't in on the conspiracy.

Ditmer said approximately ten properties would be auctioned on an average day at each courthouse. As many as four could end up being diverted to the private rounds. This happened day after day, five days a week, for several years on end.

The government showed aerial pictures of the courthouses to the jurors and asked Ditmer to describe where the rounds would take place. Ditmer said the conspirators would conduct the rounds in locations just far enough away to maintain secrecy. In Oakland, one popular spot was the bus shelter on 12th and Fallon. Another spot was the grassy area across 13th Street.

"You could conceal yourself a little bit," he said about these locations.

But later, when the FBI began investigating the auctions, listening devices were placed in the bus shelter, and agents staked the area out in vehicles to secretly film Ditmer, Marr and others. Undercover FBI agents wearing wires also posed as bidders to gather evidence.

One of them, FBI Special Agent David Lewis, also testified today. Lewis told the jury he participated in 50 auctions in Alameda County and was able to participate in three of the illegal rounds.

When asked by a prosecutor to name some of the major players in the conspiracy to stop bidding at the public auctions and organize the private rounds, Ditmer identified Marr.

"He was one of the people out there involved in it," Ditmer said. He also identified Gregory Casorso and Javier Sanchez, two of Marr's close business associates as men who helped organized the bid rigging. Casorso and Sanchez are on trial along with Marr.

After some auctions, investors would go to Marr's Fruitvale Avenue offices in Oakland's Dimond District, to "settled up," meaning to determine how much money the winning bidder owed those who helped suppress bids, testified Ditmer. He told the jurors he paid Marr in some cases, and took payoffs from Marr in exchange for his participation in the bid rigging scheme.

Cash was the preferred means of making a payoff because, according to Ditmer, it was "untraceable," and payoffs were typically in the range of several thousands dollars.

In 2011 Ditmer was approached by two FBI agents who were part of an extensive investigation into the bid rigging conspiracies that were being organized by networks of investors at various foreclosure auctions throughout Northern California. He told the court he initially "was in a state of panic" and began destroying incriminating evidence, including bid sheets that named the participants of the private rounds. But after talking to an attorney, Ditmer held onto the evidence and eventually turned it over to federal prosecutors who are now using it to prosecute Marr and others.

In court today, prosecutors showed numerous bid sheets to jurors and had Ditmer identify the people who took part in the rounds.

According to one of the bid sheets, about a dozen investors agreed at the public auction to not bid on a foreclosed Shaw Street home in deep East Oakland. Later at the private round for the house, Marr's asssociate Casorso outbid Ditmer, who was only willing to pay an extra $18,400 for the property.

Another bid sheet for a house on Lake Chabot Road in Castro Valley included the initials "MM." Ditmer said this was Marr, who took part in the illegal round.

The trial of Marr, Casorso, and Sanchez is on its fourth day. Check back for updates on the trial in the comings weeks.