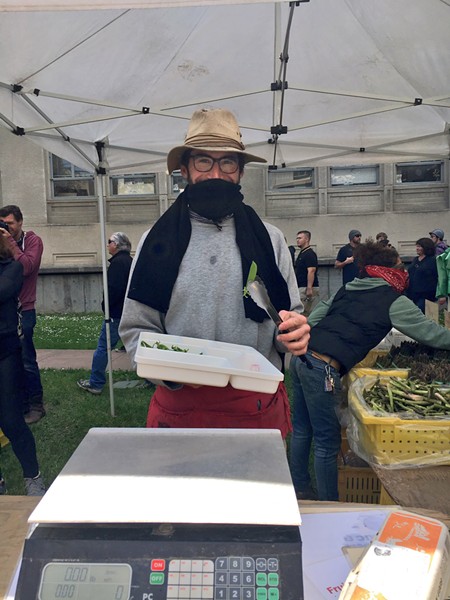 Berkeley’s downtown farmer’s market was canceled this past Saturday, due to the brawl between anti-fascists and far-right Trump supporters, now being called “The Battle of Berkeley” — but one farm decided to stand its ground.

Riverdog Farms erected its white tent and put out bright yellow food bins, which contained an array of organic fruits and vegetables, eggs, and nuts. The farm set up like it always does on Saturdays, except this weekend on the front lines of a street scuffle that left people bloodied.

“The market was officially canceled, but we wanted to be here,” Riverdog Farms owner Tim Mueller said, as sounds of nearby flashbang grenades reverberated.

"I think this is what market management was worried about," he added.

Last week, the Ecology Center, a nonprofit that runs three farmer’s markets in Berkeley, announced it was canceling the Saturday market downtown, due to safety concerns. Two opposing, non-permitted events were being planned in the Martin Luther King Jr. Civic Center Park, where the market is normally held each week.

Martin Bourque, the executive director of the Ecology Center, expressed his sorrow over the closure, but emphasized that it was necessary. “We are deeply saddened that political confrontations have escalated this far,” he said in a statement provided to the Express last week. “While this is a real financial blow to many farmers, we can not put a price on safety.” The decision was met with pushback from both the community and also vendors, who were disappointed that the city and market organizers were making way for the confrontation.

“The market was officially canceled, but we wanted to be here." click to tweet
That’s why Riverdog, a 450 acre certified organic farm located in Yolo County north of Sacramento, which was one of the first organic farms to sell at Berkeley’s Farmer’s markets, and has been in downtown every Saturday since 1991, decided to show up, anyway.

“We have never seen anything this vociferous,” Mueller said, nodding toward a throng of people pummeling each other in front of his booth. “But we knew what was going to be here today.”

Amid smoke bombs, dangerous projectiles — including glass bottles, cans, and rocks — and the violent confrontations that continued throughout the afternoon, the booth was visited by people from both sides of the fight, and the occasional regular customer willing to take a risk to offer their support.

One older woman browsing the bins of lettuce while told the Express that, while she doesn’t come out every Saturday, she “made a point of coming out here today.”

The booth also served as a neutral snack station in the middle of the melee. A worker in a straw hat, who had a black scarf draped over his face for protection from chemical agents, offered samples of snap peas to participants, media, and members of the community that were caught in the confrontation.

Some saw the booth as an opportunity to ammo up, though. A few of the organic eggs bought ended up being chucked into the crowd, reigniting fights as the confrontation moved north toward Berkeley Square.

Mueller said sales were pretty slow that day. "We have maybe had 5 percent of our normal business," he said, but that wasn't exactly the point.

“This is what we do,” he explained. “I don’t think the market should have let this event push us out of our home."