Speakers too extreme for other alt-right gatherings to appear this weekend.

April 10, 2017
32 comments
Every Saturday, the Civic Center Park in downtown Berkeley is home to the Ecology Center’s farmers market, where families, students, and organically inclined food shoppers mingle with growers and vendors. But this weekend, on April 15, the market is canceled — because of an Alt-Right rally.

Instead of white-tents and free fruit samples, visitors may instead find themselves caught in the crossfire between two opposing protests that — if anything like the violent Milo Yiannopoulos clash earlier this year in Berkeley — could end in violence.

A so-called “Patriots Day” rally is attracting far-right Trump supporters and white-nationalist activists from across California, who claim they are traveling to Berkeley to demonstrate in the name of free speech.

The unpermitted event is scheduled to feature a cadre of contentious speakers, including Pizzagate-believer and AltRight.com contributor Brittany Pettibone, Twitter personality “Baked Alaska” (whose racist and anti-Semitic tweets got him uninvited from the “DeploraBall,” an alt-right inauguration 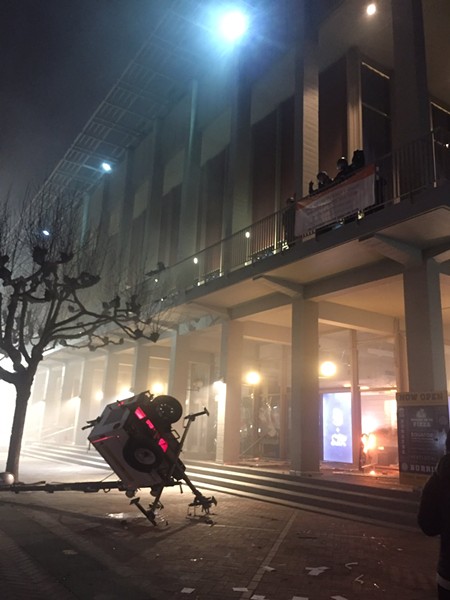 celebration), and Lauren Southern, a Canadian college student and female men’s rights activist, who broke into internet fame for shouting at rape victims.

In videos posted on the event page, organizers from the Liberty Revival Alliance emphasize that they are planning a peaceful rally, even though it comes on the heels of a pro-Trump demonstration in Berkeley this past March, which ended in bloodshed and arrests.

As a nod to the backlash from that event, and the widespread protests that broke out when former Breitbart editor Yiannopoulos was scheduled to speak in Berkeley the month before, organizers stated that they are prepared to defend themselves.

The Oath Keepers (an organization classified by the Southern Poverty Law Center’s "Extremist Files" as a radical anti-government group made up of thousands of law-enforcement officials and military veterans) and 2 Million Bikers (who have posted online they will “Protect the 1st Amendment from Thuggery [sic]”) have signed on for security and support.

In response, Berkeley's Antifa coalition is calling on its own supporters to occupy the park. “We need MASS ACTION to DEFEAT THEM AS A COMMUNITY [sic]” organizers posted on their dedicated event page. “These fascists are coming to our backyard in an attempt to scare us off the streets and they hope to build on this success. What we do, or do not do, on the 15th will have ramifications across the country." Attendees have been instructed to bring their crew, a mask, and food to share.

Several hundred people have RSVP'd to both events and many more are expected throughout the afternoon.

Citing security concerns over the likely clash between the two groups, The Ecology Center canceled Saturday's farmers market, leaving approximately forty vendors without a spot to sell their wares.

In a prepared statement released to the Express today, Ecology Center executive director Martin Bourque expressed his disappointment and explained why he felt it essential to close down for the day:


“We are deeply saddened that political confrontations have escalated this far. In a peace-loving City with such a long non-violent tradition, it is terrible that the only responsible course of action is to close market this Saturday. We have to be very cautious, as there are usually hundreds of shoppers, including children and elders, at our markets.

We’ve been working closely with the City of Berkeley. They’ve committed to additional support for the market, but the situation is unpredictable, and things may happen that are out of their control. We appreciate the police department’s restraint and what a challenge it is to protect both free speech and public safety today.

The Ecology Center Farmer’s Markets are a safe, welcoming and healthy environment for the community. While this is a real financial blow to many farmers, we can not put a price on safety.”

He encouraged patrons to come out for the famers markets held on Tuesdays in South Berkeley, and Thursdays in North Berkeley, and said they will be back again in downtown the following Saturday.