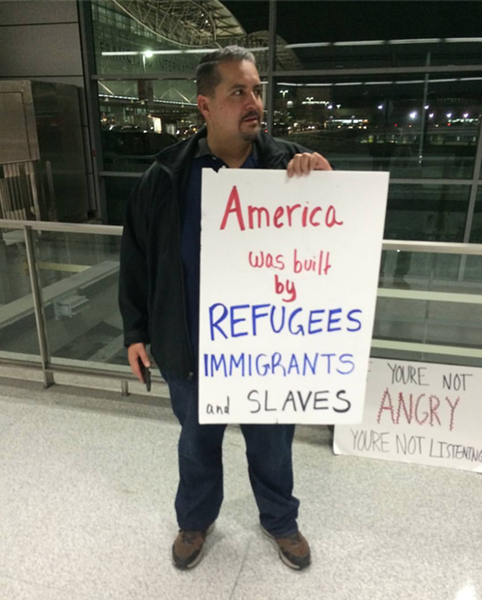 As a result, people were immediately detained in airports by border guards.

But protesters also immediately swarmed  airports like SFO to oppose the immigration bans and help those being held by the government.

Several Oakland councilmembers took part in the protests, according to Facebook posts.

On Tuesday night, the Oakland City Council is expected to do more to push back against the Trump administration's anti-immigration policies. The council is proposing to set aside $300,000 to defend immigrants in deportation hearings over the next two years.

The city's money will be leveraged with another $1 million in nonprofit support to deploy five attorneys and five community responders who will argue cases in the federal immigration court in San Francisco.

The network will also conduct "know your rights" workshops at schools, places of worship, clinics, and other places presumed to be safe from immigration agents.

City staff say this "rapid response network" will provide free legal consultations for at least 500 families, and represent up to 200 Oaklanders in immigration court.

Legal researchers have observed that people with access to legal counsel are much more likely to prevail in court and avoid deportation. Lack of legal representation often leads to deportation, but many immigrants cannot afford attorneys to defend themselves and their loved ones. Unlike criminal courts, there is no right to legal counsel in federal civil immigration court.

Trump's orders are already being fiercely debated. On Saturday a federal judge blocked his administration from deporting new arrivals caught in transit. But these people remain detained at ports of entry, their future uncertain.

At the same time that he has banned entry into the U.S. by citizens of majority Muslim nations, Trump has also said he wants to prioritize the immigration of Christians to America.

Some attorneys believe U.S. law allows the president to cut off immigration using extreme measures targeting citizens of specific nations, and to more or less discriminate based on nationality and other factors.

But others believe that Trump's order violates the the 1965 Immigration and Nationality Act, which overturned America's previous system of national immigration quotas that were based on racially discriminatory efforts to minimize Asian, Latino, African and southern Europeans from coming to the U.S.

In fact, prior to the 1965 reforms, the U.S. blocked immigrants who were thought to be "imbeciles," or who had genetic disorders. And the 1965 bill actually banned immigration of gay, lesbian, and bisexual people as "sexual deviants," and was only repealed in 1990.

Police Monitor Contracts: Two weeks ago, the Oakland City Council voted unanimously to delay renewing two contracts with the court-appointed monitor who oversees the city's police department. Councilmember Desley Brooks, who was behind the delay, said she wanted the council's public safety committee to review the contracts before rubber stamping them, and that she feels the council needs to get more involved in the oversight program.

But U.S. District Judge Thelton Henderson responded by issuing a stern order two days later requiring the city to pay the monitor, and reminding the council that the monitor is "an officer of the court," not just another city contractor.

Later, at the special city council meeting last week, Councilmember Guillen recommended that the city ditch the hearings Brooks had asked for, and to place the contract renewals back on the full council's agenda for approval.

Following Guillen's successful motion, the council is scheduled to take up the contracts again on Tuesday night.

New City Budget: Oakland is starting to draft its fiscal year 2017-2019 budget. Mayor Libby Schaaf will release her proposed budget in April, and by June the council is expected to debate and adopt a new spending plan.