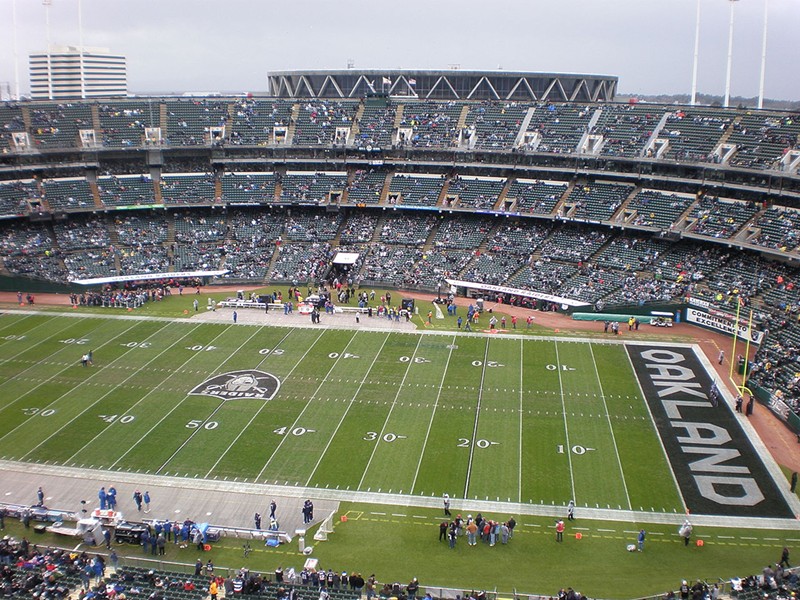 Housing. Warehouses. Artists and musicians. Vulnerable renters. Fire safety. Ghost Ship. That's all anyone in Oakland is talking about this week — and likely for weeks to come.

What, then, will the Oakland City Council and Alameda County Board of Supervisors be voting this coming Tuesday, December 13?

A new home for the Raiders.

Specifically, elected officials are scheduled to weigh in on a term sheet that — while non-binding — would kickstart negotiations to fork over $350 million in city cash and land to help pay for a new $1.3 billion (or more) Raiders stadium and mixed-use development at the existing Coliseum site.

The city and county unveiled the long-awaited details of this proposed new Raiders deal on Friday evening (leaving only one business day for analysis, conversation, and discussion of a very complicated financing plan — but who cares about sunshine and transparency in government). Supervisors will vote on the deal next Tuesday morning, and City Council that evening.

Here's a rundown of details from the Raiders stadium term sheet, and some quick-reaction analysis. (Look for more thoughtful coverage over the weekend and next week):

The project will be a 55,000 seat stadium at the Coliseum site, plus a mixed-use development that could include office space, retail, housing, hotels, parking, and residential.

The partners in the deal are the city, county, a private group led by Ronnie Lott, and Wall Street venture-capital firm Fortress Investment Group. These parties have cobbled together $1.25 billion to pay for the project, which could cost upward of $1.3 billion.

The City of Oakland will invest up to $200 million in cash on this new Raiders stadium project and $150 million worth of land. But it will not pay for any "hard construction costs for the stadium." They will pay for infrastructure for the Coliseum site, and also the new mixed-use development.

The financing plans to generate this $200 million are complicated.

Specifically: The term sheet proposes $100 million in privately-placed bonds, secured by "taxes generated by the stadium," and backed privately by the Lott Group/Fortress. I do not know if these privately-issued municipal bonds in any way make the general fund vulnerable. My concern is that the revenue source to pay off the bonds — taxes from the new stadium — may not be the most secure.

Oakland will also create an Enhanced Infrastructure Financing District to issue another $100 million bonds. This EIFD is a new tool, approved by the Legislature in 2014, that helps local governments do community development in a post-"Redevelopment" world. EIFD's are supposed for be for public works projects, such as parks or water district facilities. This means that the money raised from the EIFD bonds can only go to the mixed-use development part of the Raiders stadium project. EIFD's are also supposed to be spent on sustainability-minded projects, so I imagine the EIFD will play up that it will be located on a crucial transit corridor.

EIFD's can be formed without the need for a vote. However, to issue bonds, it would take 55 percent approval of district members.

It's also unclear to me whether the layer that an EIFD offers truly protects the general fund. At the end of the day, isn't the general fund still vulnerable? That's a question that we'll need answered (again, during our one business day to vet and discuss this deal).

The Lott/Fortress group will bridge the financing for this $100 million until the EIFD gets up an running — which is no done deal.

The city says that new revenues from the stadium and the development would pay for its $200 million cash investment. There's no specific on how much that new tax revenue would need to be, but it could be anywhere from $10 million to $20 million annually, depending on the bond rate. That seems like a lot of revenue from this type of project.

Another concern is the reliability of the tax revenue.

The city and county will also "convey" — a.k.a. gift — up to 130 acres of land at the Coliseum site to the Lott/Fortress group. In exchange they will negotiate down the road some type of remuneration, to be paid back over the years, via "participation rights in project revenues." So, basically, the city and county are off-loading the land, which they've wanted to do for a long time, but there's no specific or concrete payment plan as of yet.

The NFL, Raiders and Lott/Fortress group will be on the hook for Stadium construction cost overruns.

The city and county will have to pay off the $95 million in bond payments from the last Coliseum deal (term sheet says this will need to be resolved before conveyance of the land).

The Lott Group (or the Raiders, at some point) plan to sell seats at the new stadium, and hope to generate $200 million from unpopular seat-licensing deals.

So, basically, it's a complicated agreement — complete with multiple parties, innovative financing schemes, and a significant public commitment. Oh, and the Raiders aren't even at the bargaining table yet ...

In a press release, Oakland Mayor Libby Schaaf wrote that the term sheet "puts Oakland in the running to keep the Raiders in a way that is responsible to the team, the league, the fans and the taxpayers."

City officials described the $350 million commitment as "‘skin in the game."

The city and county are voting on it with urgency because they will need to present the plan to NFL owners, who meet in December and November, presumably to discuss the Raiders possible move to Las Vegas, and also this new plan to keep them in Oakland.

It's unclear whether or not there will be sufficient votes at the city and county to move the deal forward. Councilman Larry Reid told the Chronicle that he thinks Oakland has the vote. But Supervisor Scott Haggerty — who's been skeptical of the deal — wouldn't weigh in on the supes, calling the plan "fluid."