“We saw the use of tear gas and concussion grenades being shot in a manner that was indiscriminate into crowds that contained children, handicapped people, and elders,” said Carey Lamprecht, the co-chair National Lawyers Guild Bay Area Chapter, at a press conference this morning in Oakland.

Cat Brooks, the interim executive director of the of the NLG Bay Area Chapter, said the tactics the police used against anti-Trump protesters resembled controversial methods deployed against activists who took to the streets in the wake of Oscar Grant’s killing by a BART police officer in 2009. Brooks also compared the police department’s approach to what demonstrators experienced in May 2015, when Mayor Libby Schaaf briefly implemented a ban on nighttime street marches. That policy resulted in dozens of arrests after protesters were “kettled” — blocked from leaving an area after a dispersal order.

In response to the NLG's claims, OPD issued a statement today saying it takes all use of force incidents seriously and will investigate to see if any policy violations occurred during the anti-Trump protests. 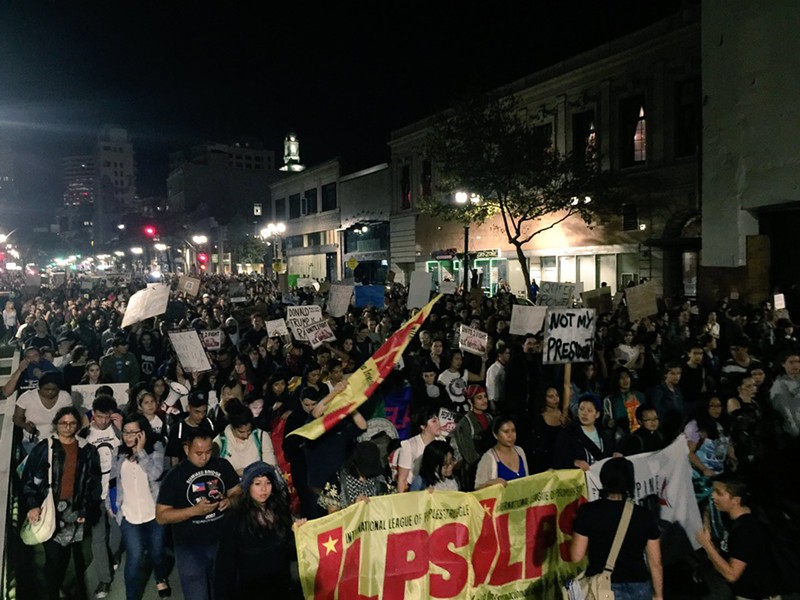 "Currently, the department is investigating and reviewing the use of force incidents that occurred during protests this month," the department's public information officers wrote. "Per departmental policy, we review all uses of force. Additionally, the Oakland Police Department’s Internal Affairs Division investigates all use of force complaints."

However, Brooks blamed Oakland’s current Assistant Police Chief David Downing for deploying less-lethal weapons on demonstrators. “It’s deputy chief Downing who from the Oscar Grant period to now is the one that’s the one in charge of making the calls that get protesters brutalized,” she alleged.

Downing took over as OPD’s de-facto chief after former Chief Sean Whent and two successors were forced out earlier this year as a result of the police sex crime scandal. He once told a group of officers that they might have to use water canons on protesters. Downing was criticized for the remark, but Mayor Schaaf’s office later claimed the “hoses” comment was rhetorical, and that Downing was simply explaining that if the department’s less-lethal weapons like pepper spray are taken away, they would have to resort to antiquated tactics.

Thousands of protesters marched in Oakland’s streets on November 9 and early into the morning hours of November 10 in response to Trump’s surprising victory. Small fires were set and many store windows were broken by so-called anarchists. Thousands more marched the next night and there were fewer reports of vandalism.

The NLG, however, has sued the city multiple times for collectively punishing protesters for the acts of a few vandals.

This time, the NLG is saying that their own legal observers — who follow protesters and police to ensure compliance with department policy and adherence to civil rights — were targeted by Oakland cops. “The way in which our legal observers were treated in the streets was unacceptable. They were met with marked aggression and an uptick in brutality,” claimed Lamprecht.

As the Trump administration transitions into power, many expect the protests to continue. Lamprecht said the NLG is putting Oakland on notice that civil and political rights must be respected.