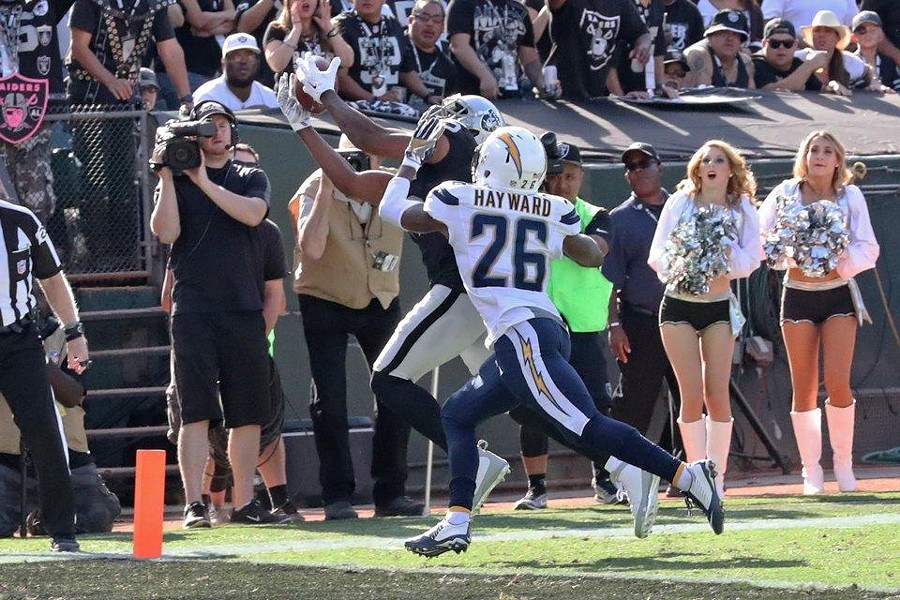 The struggling San Diego Chargers gifted the gritty Raiders a win this afternoon in Oakland, even though a porous Silver and Black defense did its best to blow the victory.

The Chargers, perhaps the league's most gaffe-prone team so far this season —  especially in the final quarter — committed four turnovers throughout the day. On top of that, punter Drew Kaser also shanked a 17 yarder, which led to a Raider touchdown in the second half.

But the lowlight for the Bolts was with the game on the line, when Kaser inexplicably botched the hold on what would have been a tying 36-yard field goal.

Despite these turnovers and an overwhelming time-of-possession advantage (36:17 to 23:42), the Raiders just inched out the win, 34-31.

After the game, Coach Jack Del Rio called out his defense's tendency to allow big plays. He said the guys needed to put an end to this and "stop playing Santa Claus."

Del Rio didn't name names, but safety Reggie Nelson and defensive back David Amerson botched multiple coverages during the afternoon. Tyrell Williams burned Amerson on a 29-yard post-route TD early in the game (no thanks to Nelson's blown help coverage). And Williams also shook Amerson for a 50-yarder later in the game after the DB took a bad angle on a tackle.

These defensive woes again highlighted the Raider secondary's troubles, especially when facing speedier wideouts. The Raiders also allowed more than 400 yards in opposing offense for the fourth time this season.

On the other side of the ball, it was the strongest showing of the year by Amari Cooper (138 yards, including a 64-yard shake 'n' bake touchdown), and Sebastian Janikowski drained four field goals.

But the game's defining moment was another let-it-ride decision by Del Rio: On fourth-and-two, he called for a Derek Carr-to-Michael Crabtree fade route — which they executed flawlessly for a 21-yard touchdown. After a two-point conversion to Cooper, the Raiders took a 27-24 lead into the fourth.

Earlier in the game, however, Carr was careless, throwing a pick on the first drive of the day and nearly a second on the subsequent possession. He also almost threw a third pick in the second half as the Raiders threatened to score.

The third-year quarterback experienced a more robust pass rush than in the previous four games, and his spirals lacked accuracy perhaps because of this. Carr's QB rating was the lowest so far this year, at 50.7.

While Cooper's afternoon was huge, it could've been bigger. He experienced issues in the red zone, twice unable to drag his toes on potential touchdown grabs.

The backfield platoon struggled without Latavius Murray, as well, notching just over three yards a carry and only 76 total rushing yards.

All that said, it's another win for the team, which is now tied in first with the Denver Broncos, who lost to the same squad the Raiders fell to in week two, the Atlanta Falcons.