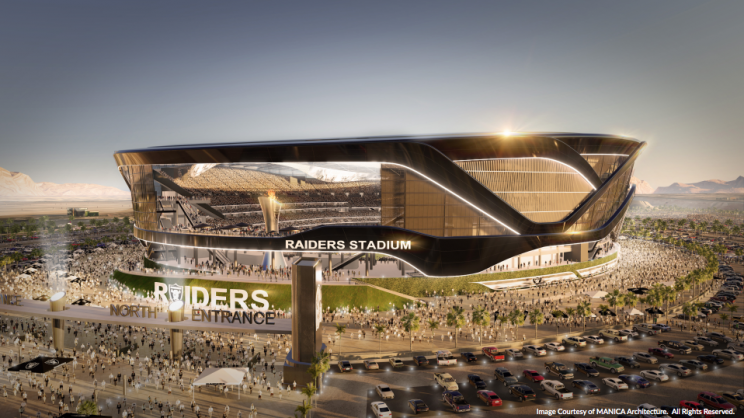 Yesterday, the Express reported that the Oakland Raiders “have new and unreleased rendered images of what a Coliseum stadium might look like at 66th Avenue.”

More information has emerged about these images.

Scott McKibben, executive director of the Oakland-Alameda County Joint Powers Authority, told the Express today that he saw the drawings during a meeting with the Raiders nearly a year ago.

"These were just a couple of drawings that were on easel boards in the conference room as we were having a meeting with the Raider ownership and management," he explained. "They were more to show to us what was their view of what the stadium would look like in certain geographic parcels of our property.

"One of them is football-only. One is with football on the south side and a baseball facility on the north side, and so on. These are nothing more than I'm sure the Raiders saying, 'Okay, there's 125 acres of land there. We need approximately 80 to 85 acres for parking, the arena's gonna stay, so where are we thinking about putting our stadium? What might that stadium look like with that being 55,000 seats?'"

The team has yet to publicly release these images. Raiders spokesperson Will Kiss didn’t immediately respond to an email to discuss or release the images.

"To the best of my knowledge, those drawings have never left the conference room of the Raiders center," McKibben said.

Zennie Abraham, an Oakland video blogger who has extensively covered the Raiders’ stadium saga, told the Express that the rumored drawings "are at Raiders headquarters. They're not renderings that somebody has on a PDF or a JPEG that are on some file that somebody's holding at the city.

"Because I can guarantee you, if they were, one of those city people would have leaked them.”

Meanwhile, the Southern Nevada Tourism Infrastructure Committee released renderings this morning for a Raider stadium in Las Vegas, just before it met for five hours to discuss the plan. Forbes reported that the Raiders filed for a trademark of “Las Vegas Raiders” on August 20.

McKibben said he most recently spoke with Raiders owner Mark Davis six to eight weeks ago. McKibben remains optimistic. “We've got a great relationship with the Raiders,” he said. “We just had training meetings with them all week. We're just kind of now waiting for an appraisal to get done on the property and for prospective developers and people that are interested in teaming up with the Raiders of putting a package together for a new stadium.”

Look for a cover story on the Raiders before the NFL season begins.