Toxic chemicals were recently discovered in air samples inside 301 12th Street, formerly an auto repair shop, now an Oakland charter school.
Students, faculty, and staff at an Oakland school may have been exposed to a harmful airborne chemical over the past decade.

According to state records, soil and groundwater samples recently collected from underneath the Oakland Charter High School and Oakland Charter Academy campuses, located in the same set of buildings at 345 and 301 12th Street, showed "elevated concentrations" of trichloroethylene (TCE) and other poisonous compounds. Air samples taken inside the school's buildings revealed vapors of TCE at levels exceeding safety limits set by the US Environmental Protection Agency. TCE is known to cause cancer and developmental and neurological problems, according to the EPA.

Officials with the Amethod Charter Schools organization, which runs both the middle school and high school currently located on the site, told the Express they were unaware of the pollution until May of this year. Amethod Charter Schools leases the buildings — former auto repair shops and garages — from the Richard S. Cochran and Susan L. Cochran Family Trust.

Merrill Schwartz, an attorney for the Cochrans, wrote in an email to the Express that his clients were unaware of the airborne toxins until May 8 of this year. In cooperation with state environmental officials, they've taken steps to remove the chemicals from the air inside the buildings.

The presence of TCE in the soil and air was discovered in May when an environmental consultant for The Martin Group, a real estate developer that plans to build hundreds of apartments and retail stores on the site, had soil, soil gas, and groundwater samples collected as part of their due diligence process for purchasing the land and buildings. Air samples taken from inside the buildings showed concentrations of 10 to 200 micrograms per cubic meter of TCE. Exposure to concentrations higher than 2 micrograms over long periods of time can be unsafe, according to the EPA.

TCE is a solvent used in degreasing mechanical parts. It's unclear how it ended up buried in the soil, but it may have been deposited when the buildings housed auto repair shops. DTSC has identified other potential contaminants at the site, including petroleum and toxaphene.

Jorge Moreno, a public information officer with DTSC, said that state officials have taken action to prevent vapors from moving from the subsurface into the school’s buildings. According to Moreno, portable air filtering units were installed in the classrooms and other school areas on May 18. The filters extract toxic compounds from indoor air. Cracks and other openings in the floors and structure that might be pathways for vapors were sealed off. Most recently, on July 11, a soil vapor extraction system was installed in an effort to remove toxic fumes from the shallow subsurface beneath the school's garage. The safety measures have been paid for by the property's current owners, the Cochran trust.

"The owners have spent more than $250,000 in less than 90 days to fix a problem they didn't know they had," Schwartz, the attorney for the Cochran's wrote. "If there's anything we can all agree on, it is ensuring the health and safety of school aged children in Oakland."

A test on May 24 showed that TCE concentrations inside the school had been reduced to safe levels, according to DTSC.

But the buildings have been used for over a decade as a school campus. The site was originally leased by the Lighthouse Community Charter High School in the mid-2000s. According to the 2004 petition establishing the Lighthouse charter school, the former auto repair shop and parking garage was "an ideal setting" for the campus. 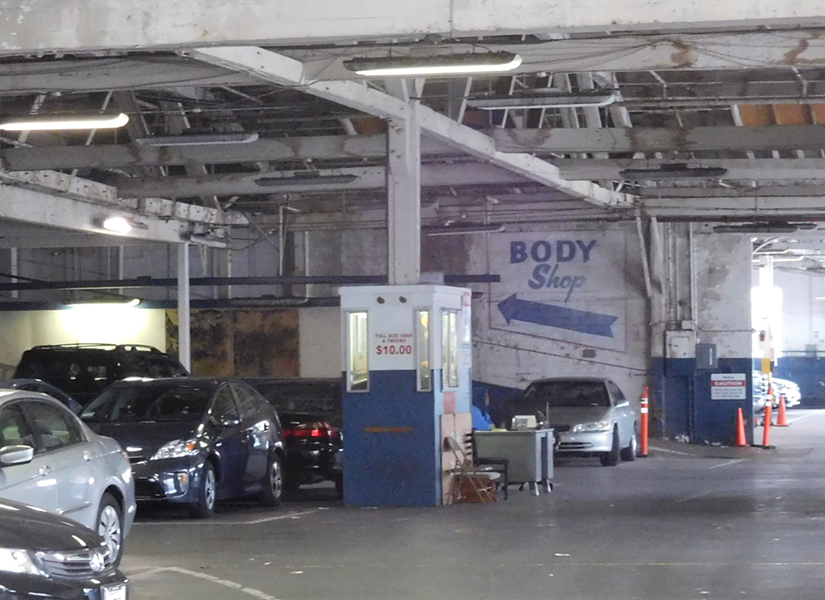 Half of the buildings on the sprawling city block are still operated as a parking garage. Approximately 520 students attended classes at the site between 2005 and 2009 while it was operated as a Lighthouse school, according to records maintained by OUSD. Phone calls and emails to Lighthouse school officials were not immediately returned.

After Lighthouse moved off the site, the Amethod Charter Schools leased the property to house the Oakland Charter High School. In 2011 Amethod opened its Oakland Charter Academy middle school at the site also.

Valerie Goode, a spokesperson for the Oakland Unified School District, told the Express in an email that when a charter school acquires a facility for use as a campus, they must submit a form called a Material Revision Application, which among other things, asks whether there are any issues with toxic contamination.

Amethod records filed in 2011 with the Oakland Unified School District, including a Material Revision Application, described the facilities as being up to state and local building codes and in accordance with the state's education code. Amethod agreed to test the sprinkler systems, fire extinguishers and fire alarms. Charter school records maintained by OUSD do not, however, indicate if the school district or any charter operators ever tested for toxic chemicals in the soil and air at the 12th Street property.

Goode wrote that If a charter school is located on a site owned by the school district, then the site will have already undergone environment review before being used as a school. But for a charter school on a privately owned site, the charter school operator would be responsible for obtaining legal clearance and conducting an environmental review.

DTSC officials told the Express that they think the air in the building doesn’t currently pose a risk now that mitigation systems have been installed. But they said the site may need to be cleaned up if it’s going to be turned into housing.

The Martin Group plans on purchasing the site, demolishing the buildings, and constructing a 272-unit apartment building with ground floor retail. At the Oakland Planning Commission meeting on Wednesday, representatives of The Martin Group sparred with Chinatown activists who are demanding that the developer include more community benefits in their project. One of the requests from neighborhood activists was that the Amethod schools be allowed to stay in the buildings until next year so that the education of several hundred students isn’t disrupted by a move.

Jorge Lopez, the CEO of Amethod Charter Schools, told the planning commission that he doesn’t want to have to move the schools by September, but he hasn’t been able to strike a deal with Cochran for a lease extension yet.

As to whether staying on the campus could pose a danger to students and staff, Lopez told the Express that "DTSC has since mitigated the air quality issues."

"It’s going to continue being active as a school for a while," said Harold Duke, the project manager for DTSC overseeing the site's cleanup. "So we’ll continue to do sampling to verify air concentrations are below levels."

Tom Booze, a toxicologist with the DTSC, told the Express he couldn’t speculate as to whether students who attended the campus in previous years were exposed to unsafe levels of TCE and other contaminants. "We don't know what people might have been exposed to, or for how long, so we can’t speculate," he said.

The Martin Group’s proposal faces opposition also from a group called Oakland Residents for Responsible Development, an unincorporated association of labor unions and neighbors who say they are concerned that construction could expose workers and residents to buried toxins and dangerous vapors. Laura Horton, an attorney representing the association, sent a letter to the planning commission on Tuesday asking that a new environmental study be carried out for The Martin Group's project because of the discovery of the contamination.

"We are really concerned about the high levels of contamination," Horton told the Express. "There hasn’t been enough disclosure about mitigation and cleanup plans and whether this site is even appropriate for residential building."