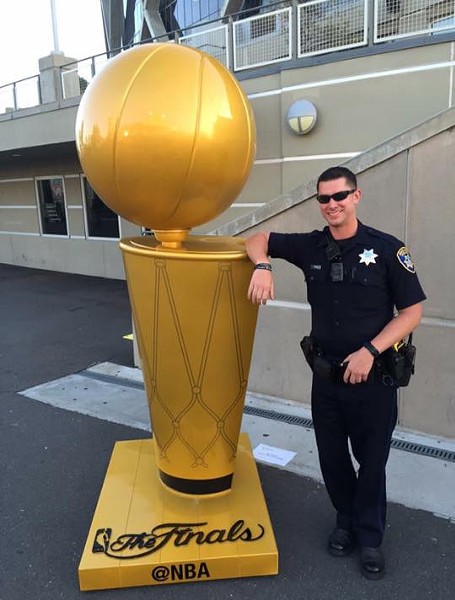 But the Express has learned that the investigation also involves a potential homicide, one committed by a Oakland cop, according to interviews and records.

Sources inside the department say that the allegations of sexual misconduct stem from the suicide of Oakland Police Officer Brendan O’Brien in September of last year.

O’Brien’s wife, Irma Huerta Lopez, died June 16, 2014. Her death was ruled a suicide, but was briefly classified by homicide detectives as a potential criminal investigation.

Her family believes that O’Brien shot her. “He killed her," Paulina Huerta, Irma’s sister, said in an interview today. Huerta said the police ignored her family. "Nobody’s listening."

Huerta Lopez’s coroner’s report — which was released for the first time earlier today after the Express requested it — called her death suspicious. The coroner’s report on O’Brien’s suicide also noted that his wife’s death the year before was suspicious. And Alameda County sheriff’s department investigator Solomon Unubun wrote that “O’Brien’s wife committed suicide in the same apartment on 6/16/14 and her family thought her death was suspicious.”

According to several sources inside the police department, the sexual misconduct was ongoing in 2014, involving several police officers and a possibly underage girl named Celeste Guap. O’Brien reportedly had a relationship with Guap. Guap was previously identified in television news reports that aired Thursday.

It’s unclear when OPD officers and supervisors first learned of the sexual misconduct, but an internal affairs investigation was not opened into the sex crime allegations until after September 25, 2015, the date that O’Brien shot and killed himself in his apartment.

Police sources say O’Brien, a 30-year-old who joined OPD in 2013, left a suicide note that included information about the alleged sex crimes. On Tuesday, Guap wrote on her Facebook profile timeline that “the only officer I messed with underage is sadly gone now, so I don’t know why this is still being brought up.” 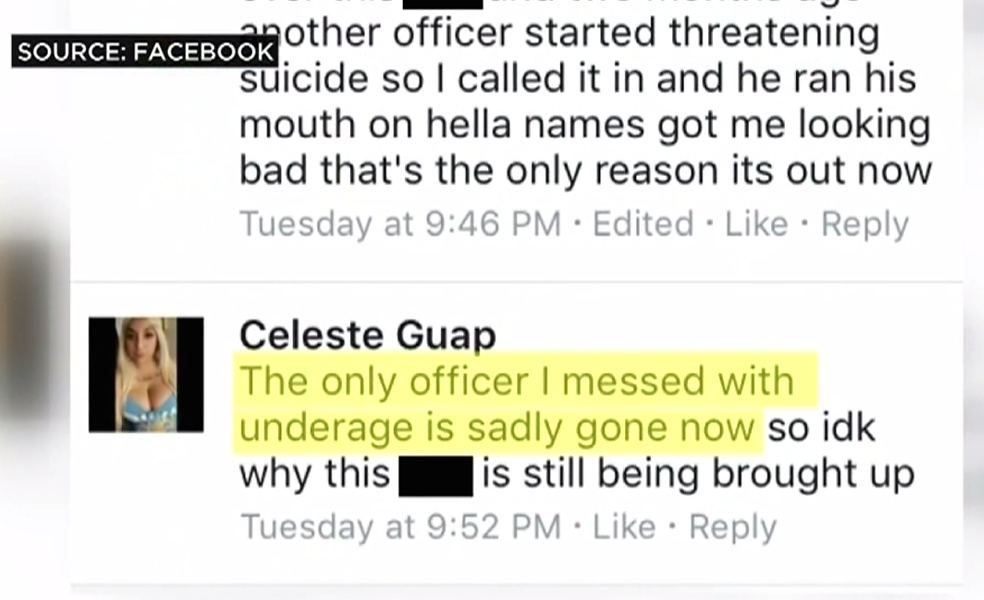 O’Brien was previously investigated by homicide detectives after his wife was found dead of a gunshot wound in his apartment. At the time, O’Brien was living in a four-unit building on Greenridge Drive in the Oakland hills, a property owned by Oakland police veteran Eric Karsseboom. Other cops lived in the building.

According to a coroner’s report, Huerta Lopez died of a gunshot wound to the head. Two bullets had been fired from the gun, and one lodged in the wall in the apartment. The gun — O’Brien’s off-duty Glock 45 caliber pistol — and two casings were found near her feet. An Oakland police detective told a sheriff’s department investigator that an upstairs neighbor heard a loud thud around the time she was shot.

“Why were there two shots if she killed herself?” asked her sister Huerta, who did not know O’Brien was dead until informed by Express reporters today.

A sheriff’s department detective covered Huerta Lopez’s hands with paper bags and ordered an OPD crime scene technician to gather evidence to test for gunshot residue, which would indicate she fired the pistol that killed her. It’s unclear if OPD conducted the gunshot residue test.

Huerta Lopez’s coroner’s report, however, noted that there was no visible gunshot residue on her hands. There is no mention of whether O’Brien’s hands were ever swabbed or tested for traces of gunshot residue in the report.

According to Huerta Lopez’s coroner’s report, O’Brien and his wife had been shopping earlier in the evening. They returned home, but got into an argument. O’Brien told responding officers that he had last seen his wife alive fifteen minutes prior to going to a local gas station near the residence, and that, when he returned to his apartment at 10:52 p.m., he “found his wife unresponsive on the bed” with a gunshot wound to the head.

Oakland police officers who arrived at O’Brien’s apartment initially treated Huerta Lopez’s death as suspicious. They took him to a police station, where he was interviewed for a potential criminal investigation.

Huerta Lopez’s autopsy report stated that the gunshot wound that killed her was in the right side of her head, and that “the basic direction [of the shot] is towards the left of the body, down towards the feet at a 5-degree angle and toward the back of the body at a 10-degree angle.”

Huerta Lopez’s sister told the Express she believes that O’Brien killed her sister, and that members of the Oakland police department did not conduct a thorough investigation into her sister’s death.

According to Huerta, O’Brien and her sister met online and dated very briefly. They broke up, got back together in January 2014, and then married. But the marriage was rocky, with frequent arguments, Huerta said.

The sister explained that OPD never released Huerta Lopez’s property, including her cell phone that she was carrying the night she died at O’Brien’s apartment.

She also said the Sheriff-Coroner never provided her family with a copy of her sister’s autopsy report, despite requests. According to Huerta, OPD officers showed her family a surveillance photograph of O’Brien at a gas station on the night of Huerta Lopez's death, which the officers said proved O’Brien was not present when she allegedly shot herself. Huerta said the police officers’ appeared to be downplaying the possibility of a homicide.

According to sources who viewed his suicide note, O’Brien claimed he had been struggling with post-traumatic-stress disorder from his time as a sergeant in the U.S. Marine Reserve Corps, as well as the strain of being under suspicion from OPD, Huerta Lopez’s family and his own relatives. He wrote that he had been drinking heavily, both off-duty and while in uniform and on patrol.

These sex allegations, and the possibly botched internal-affairs and criminal investigations, only became public after US District Judge Thelton Henderson issued an unprecedented order on March 23. The judge cited “irregularities” and “violations” of procedures by Oakland police detectives in charge of the sexual-misconduct inquiry, and he called into question the department’s commitment to accountability and reform.

Henderson directed court-appointed independent monitor Robert Warshaw to take over the sexual-misconduct case from OPD to ensure it was properly conducted.

Henderson’s order did not detail the alleged sexual misconduct. A KRON 4 story that aired on Monday unearthed those allegations.

“There is no question that there are credibility issues with the internal-affairs investigations here,” said Oakland civil rights attorney John Burris about Henderson’s court order. “To the extent these allegations are true this could impact the length of the NSA.”

Following a string of officer suicides three years ago, there was pressure for OPD to increase mental health services, including counseling and mental health therapy, for officers. It is unclear what sort of assistance or outreach was made to O’Brien after the death of his wife.

The Oakland Police Department did not respond to a request for comment for this report.

Clarification: this story has been updated to note that the Express did not disclose the identity of Celeste Guap. Guap was first identified in television news reports that aired Thursday.