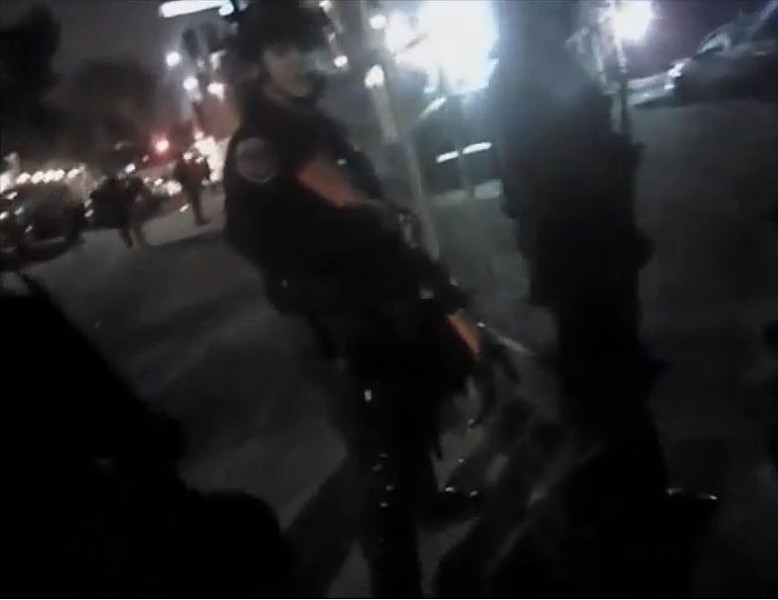 Alameda County Superior Court Judge Evilio Grillo declined to issue a decision yesterday in a case that could have far-reaching implications for public access to police officer body camera video. At the center of the case is a dispute over a $3,247.47 bill that the City of Hayward submitted to the National Lawyers Guild (NLG) in response to a Public Records Act request. Last year the NLG had requested body camera footage from multiple Hayward police officers who were deployed to conduct crowd control operations in Berkeley during a 2014 Black Lives Matter protest. Protesters have alleged that the officers illegally used less-lethal weapons against them. Hayward officials responded to the NLG’s records request by having a city employee spend 35.5 hours redacting audio and visual material from the footage. The city then charged the NLG for the employee’s time, which it valued at $72.50 per hour.

The ACLU of Northern California and the Law Offices of Amitai Schwartz filed a lawsuit opposing the charges. In court yesterday, Schwartz argued that while the California Public Records Act does allow a city to charge a requestor for the direct cost of duplicating a record, and also for “extracting” information from a record to produce a new record, the law does not permit a city to charge a requester for costs associated with redacting information contained in an existing record such as a video. According to Schwartz, the city of Hayward is impeding the goals of police accountability and government transparency by charging an exorbitant sum for the videos. A normal person, or a police watchdog group with less resources than the National Lawyers Guild or ACLU, would not be able to pay over $3,000 to obtain police body camera footage, Schwartz argued.

During brief oral arguments in court, Judge Grillo attempted several times to boil the the case down to one simple issue. He wondered aloud how to strike a balance between the financial burden that is imposed on a city that has to expend considerable time and money redacting records like a police video, and the public’s interest in accessing certain records that might reveal examples of police misconduct or civil rights violations.

“No, I don’t agree,” answered Justin Nishioka, deputy city attorney for the City of Hayward.

Nishioka said that in prior cases where courts have ruled that a public agency must foot the bill for a particularly burdensome and expensive records request, the requester was a death row inmate facing imminent murder by the state, and therefore the state’s financial burden paled in comparison to the inmate’s interests in pleading his case. That case involved LaTwon Weaver, a Black man who was sentenced to death in 1992 for robbery and murder. Weaver made a Public Records Act request for documents from the San Diego District Attorney’s Office pertaining to possible racial bias in the charging of homicide suspects, but the district attorney denied the request on the grounds that it was overly “burdensome” because it would take a county employee up to 40 hours to sift through the records at a cost of approximately $3,400. The state court of appeals sided with Weaver, however, and forced the district attorney to produce the records and not bill Weaver for the cost.

Judge Grillo responded with another question, asking whether the attorneys thought that releasing police body camera video served a public interest in holding police officers accountable: “What if it was a person in the street who thought they were about to be murdered by the police … or regular-old police conduct on the street that people would think would not be justified?” asked Grillo.

Schwartz responded that the requester is irrelevant, and that the true measure is the public interest broadly conceived. Referring to the Weaver case, Schwartz said the court’s decision wasn’t based on Weaver’s interest, but rather the public’s interest that the death penalty be fairly and efficiently administered. Similarly, Schwartz argued that the public as a whole — not just a few protesters or attorneys alleging police misconduct at a specific demonstration — has an interest in ensuring that police officers carry out constitutional policing and do not engage in misconduct.

“Every day we find police officers sued, officers convicted, exonerated, due to body camera footage. This is probably one of the most important advances to police accountability in years,” Schwartz said about police body camera records.

“In the face of overwhelming public interest favoring disclosure the city presented a bill, 35 hours of work on the videos,” said Schwartz. “For an individual it would have been highly prohibitive to be charged over $3,000 for disclosure of recordings of street police behavior.”

Nishioka countered that perhaps the state Public Records Act has fallen behind technological progress, and that Hayward is merely trying to recoup its costs for extracting video evidence, a process lawmakers did not foresee. “The problem is that the California Public Records Act has fallen behind the technological landscape,” said Nishioka. “The ruling we’re seeking brings the PRA to the present day. Extraction can be charged to the requester.”

Grillo again attempted to focus the the case on a core question, suggesting this time that it all hinges on what the definition of “extraction” is. According to Hayward’s attorneys, the video redaction process its employee used was a form of extraction. Under the Public Records Act, a city can recover full costs from the requester for work performed in extracting a record, per Section 6253.9(b)(2) of the Records Act which states:


Schwartz countered that the process of redacting a video is not the same as extracting information to produce a record. Instead, it is a process of segregating exempt material that is contained in a preexisting record which on the whole must be disclosed as a public record — a police body camera video.

“Here we have videos which on the whole are non-exempt,” said Schwartz. “It was a segregation process they carried out which they’re now calling extraction. If there’s a problem with the statute, the solution is to go to the legislature and get them to solve it, not to ask a court to come up with something that wasn’t in the statute.”

Judge Grillo appeared to agree with this reading of the law. “If you already have a video, it’s editing a record,” Grillo said about the redaction process. But Grillo did not come to a decision on what the exact definition of extraction is, or whether redacting a video amounts to extraction under the law.

“This all boils down to what extraction is, doesn’t it?” said Grillo.

It’s unclear when Grillo will issue a final decision in the case.