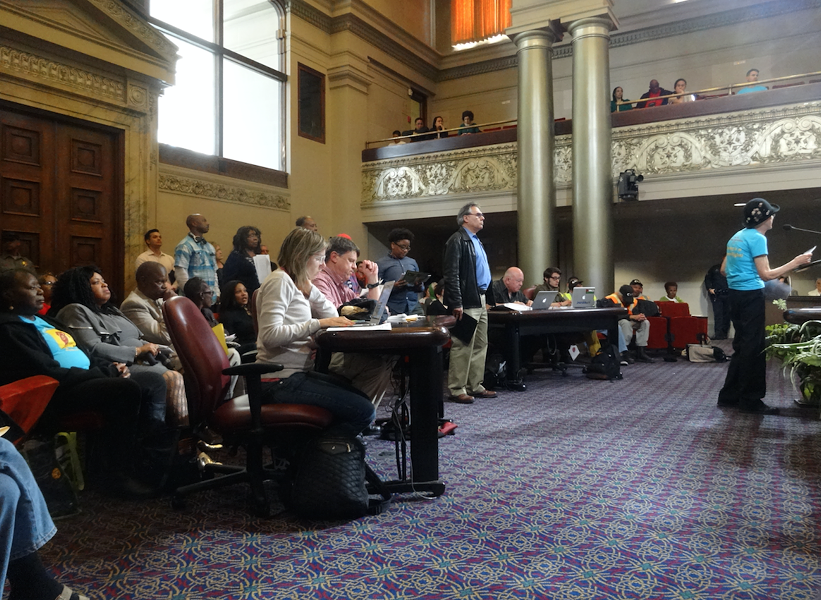 Affordable housing advocates are accusing Oakland Mayor Libby Schaaf and the city council of “gutting” housing assistance for low-income residents by redefining the definition of affordable housing. At a meeting of the city council’s Community and Economic Development Committee yesterday, dozens of people representing nonprofit housing groups condemned the city’s plan to shift millions in affordable housing subsidies away from low-income households and spend the money instead on subsidies for middle-class homebuyers.

One of the pots of money at stake is the millions of dollars the city expects to raise from housing impact fees levied on new market-rate housing developments. The city has yet to approve the fees, but they could take effect in parts of the city as early as September of this year. City staffers are asking the council to change the definition for affordable housing so that the impact fees can be “used for moderate-income housing and not just low-income and very low-income households.”

City staffers want to change the definition of affordable housing so Oakland can spend impact fee funds on “moderate-income” households. A moderate income household is defined as one which earns as much as 120 percent of the area median income, or $100,350 for a family of three.

“The city has an obligation to affirmatively further fair housing,” said David Zisser, an attorney with the nonprofit legal aid group Public Advocates, during the public comment period yesterday. “This moves us in the opposite direction by shifting resources away from low-income to moderate-income residents.”

City staffers also want to redefine affordable housing for two other affordable-housing funding sources so that middle-class families can benefit from housing subsidies. Oakland currently operates a first-time homebuyer program that makes subsidized loans to very low- and low-income renters seeking to purchase a home in Oakland. To qualify for the program, a household cannot earn more than 100 percent of the area median income, or $84,150 for a family of three. The city wants to increase this income limit to 150 percent of the area median income so that a family of three that earns as much as $126,230 a year would qualify for a subsidized home loan from the city. A borrower does not have to be an Oakland resident to qualify for these subsidized loans.

In a similar move, city staffers are proposing that so-called “boomerang funds,” which are dollars distributed to the city by the state as a result of the dissolution of its redevelopment agency, be spent on affordable-housing programs that benefit households that earn as much as 150 percent of the area median income, up from the current limit of 80 percent median income.

Zachary Murray of the Greenlining Institute told the council yesterday that these changes would further harm the ability of low-income Oakland residents to purchase homes in Oakland. Murray said that banks right now are making very few loans to Oakland residents whose income falls below the 100 percent AMI level.

“The reality is that folks who are at 120 percent AMI are receiving more loans than all other groups combined,” said Murray, about the ability of moderate-income households to obtain mortgage loans. “There is no crisis of access for these folks.”

But several council members pushed back. Councilmember Anne Campbell Washington said that changing the definition of affordable housing is necessary to help teachers and other middle-income residents stay in Oakland as real estate prices continue to rise.

“The 120 percent AMI level, I’m wondering if there’s a misperception of what that is,” said Campbell Washington during the meeting. “It’s $111,000 for four people. A family of four with two teachers as parents — that is who we’re trying to house. It’s very important for me to keep our teachers here in Oakland.”

Councilmember Lynette Gibson McElhaney said that it is “heartbreaking” to her to hear affordable housing advocates “vilifying” middle-class people. “I’m troubled by the tenor of our [affordable-housing] advocates to look at a progressive council, being vilified as if we do not care.”

“There are hardly any renters in Oakland who make 120 to 150 percent of the AMI," Levin told members of the committee. Levin pointed to US Census figures showing that the median household income for renters in Oakland is $40,250.

“You will be helping very few people who currently live in Oakland,” said Levin. “This money is going to attract higher-income folks to come live in Oakland at the expense of existing residents.”