A recent report shows Oakland and San Francisco among cities with highest income inequality in the state. 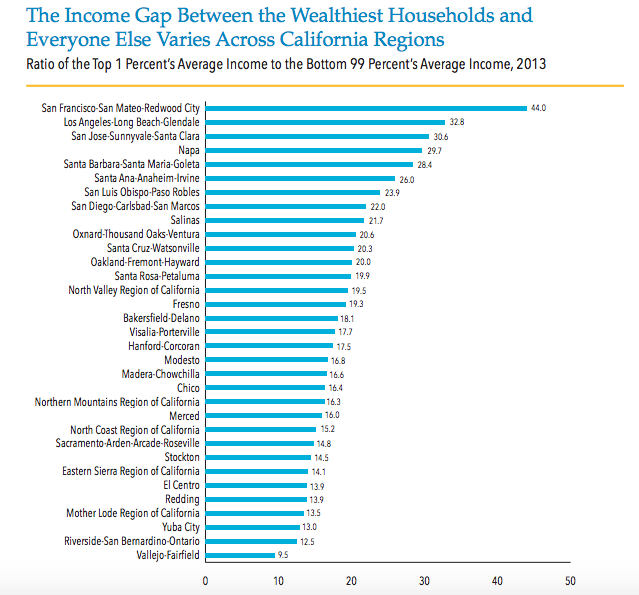 The California Budget & Policy Center, an independent policy research center based in Sacramento that released the study, found San Francisco to have the highest income inequality ratio, where the average wealthiest household ($3.6 million in 2013) earns 44 times the average income of the bottom 99 percent ($81,094). San Francisco also had the highest share of income going to the top 1 percent, with 30.8 percent of the region’s income going to its highest earners in 2013.

The Oakland-Fremont-Hayward metropolitan area ranked 12th in terms of income inequality ratio, with its 1 percent earning $1,271,054 on average in 2013 – about 20 times that of the bottom 99 percent ($63,397). The East Bay region however jumps up to sixth in the study’s ranking of top 1 percent income growth over the study period. According to the report, the 1 percent in Oakland-Fremont-Hayward has grown by 87.8 percent since 1989, while the bottom 99 percent has seen only an 8.1% increase.

The report, which looked at thirty different metropolitan and rural areas across California, analyzed trends among the state’s “top income” households through three different metrics, including level of inequality, change in average income for both the top 1 percent and bottom 99 percent since 1989, and the share of total income captured by the highest earners over 25 years. According to the report, “all three metrics show that California’s income growth has been heavily weighted toward the state’s highest-income residents, especially in the wealthiest regions.”

The issue of a widening income gap is pervasive in California’s economy, and comes at little surprise to many living in the Bay Area, where the cost of living has skyrocketed. According to California Budget & Policy Center Executive Director Chris Hoene, there has been substantial economic growth in the Bay Area, yet these gains are primarily received by the top 1 percent on both sides of the bay. “When you combine that trend with related trends that we know, like increasing costs of housing, it means for everyone else, the other 99 percent, it’s increasingly harder to get by,” Hoene said in an interview.

“This goes along with the economic story of the Oakland-Fremont-Hayward region over the last few decades,” Hoene continued. “If we were looking at 1989, we might be telling a story where that growth wasn’t as widely spread and the area wasn't doing as well. Fast forward to 2013 and the Bay Area is a leading economic region in the country. You’re seeing a lot of economic growth, but it’s concentrated at the top.”

Though the East Bay region showed an increase in incomes for the region's 99 percent since 1989 – compared with other regions such as Merced, which saw a 20.2 percent drop in the 99 percent’s income – Hoene said 8.1 percent growth over the last 25 years is inadequate to keep up with the cost of living.

If the trend continues, Hoene believes the economy will eventually reach a scenario where future economic growth is less likely to occur, and more people are displaced from their homes and neighborhoods, and there is inadequate funding for public services.

“One of the things you want to see with trends like this is policy put in place to mitigate the impacts of inequality,” Hoene said. Increasing the minimum wage, offering benefits to part-time and contracted workers, and expanding affordable housing and transportation are a few of the ways he sees this can and should be done, and to ensure workers have access to the booming economy.