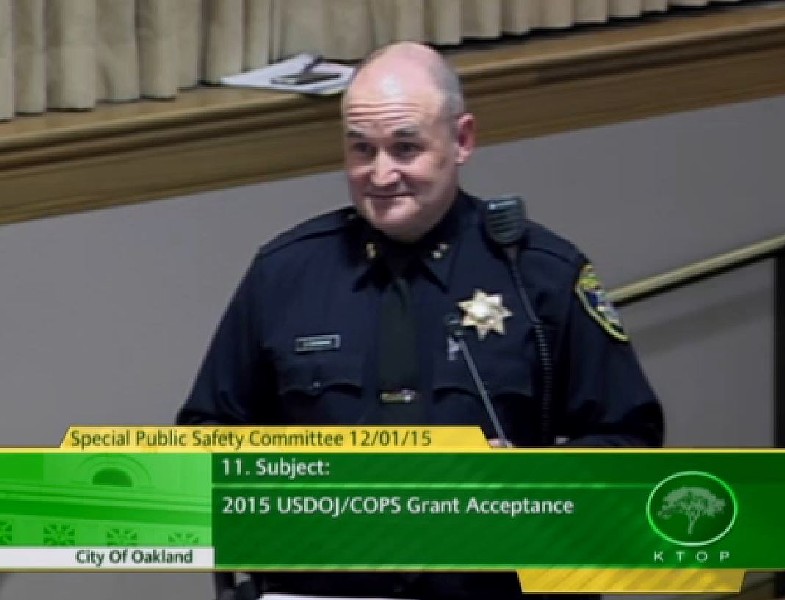 In September, the US Department of Justice announced that it was awarding a $1.875 million grant to Oakland to help hire fifteen new police officers. But newly released documents show that the grant comes with a hefty price: It requires Oakland to spend $10.25 million of its own money on the officers' salaries, departmental overhead costs, and other expenses. And the matching funds that the DOJ is requiring the city to spend has some questioning whether it’s a good deal.

During the city council’s public safety committee meeting last week, Deputy Chief David Downing said the grant will help grow the department by fifteen sworn police officers. Downing said this is Oakland’s fifth Community Oriented Policing Services (COPS) grant from the federal government in six years. The city’s “matching funds” will pay for 85 percent of the total cost of hiring the new officers, while the grant only covers 15 percent.

“I am deeply concerned about this grant. I don’t understand why we would spend $10 million to get $1.8 million,” said Councilmember Desley Brooks, who is also chair of the public safety committee. Brooks voted against accepting the grant.

The extra $10.25 million that OPD wants from the city's general fund for the grant was not included in the 2015-17 biennial budget. As a result, accepting the grant will require the city to allocate an additional $3,734,233 to the department’s current budget, and another $6,520,531 in the 2017-2019 budget, which hasn’t yet been drafted. This money would come out of Oakland's general fund, meaning there would be less to spend on other departments and programs, including parks, libraries, and affordable housing.

Councilmember Dan Kalb supported the grant and additional city spending to hire new officers. “I’ve said since before I took office that I want our police force to get up to, and stabilize at eight hundred sworn officers, if not go over that number,” said Kalb. Kalb added that growing the police force isn’t cheap, but that it’s a “worthwhile obligation.”

In 2014, the Oakland City Council unanimously accepted a similar COPS grant from the US Department of Justice. The 2014 grant was also for $1.85 million and required Oakland to match the grant with $8,774,944 in city money from the general purpose fund. Previous COPS grants provided much more federal support and required fewer matching city funds. For example, in 2013, the DOJ provided Oakland with a $4.5 million COPS grant, and required the city to only match it with $85,000.

Causa Justa, a community organization focused on affordable housing and development policy, sent an email this morning criticizing the proposed COPS grant as a poor use of Oakland’s budget resources. The group wrote that its staff members are often told by city officials that there simply isn’t enough money to pay for affordable housing programs or to enforce code complaints against problem landlords.

The full city council will vote on the federal grant at its meeting tomorrow night.