Black Lives Matter activists and the Bay Area labor movement combined forces today for a protest at the offices of Alameda County District Attorney Nancy O’Malley. The action included a sit-in inside O’Malley’s office by labor union leaders who are calling on the DA to drop charges against a group of activists known as the Black Friday 14.

In November 2014, the Black Friday 14 shut down BART services by blocking a train at the West Oakland BART station. Although the BART board of directors dropped a request that the activists pay tens of thousands of dollars in restitution, DA O’Mally has continued with plans to prosecute the group.

In May, the Alameda County Labor Council dis-invited DA O’Malley from an awards celebration in her honor after she refused a back-channel request by the unions to drop charges against the Black Friday 14. 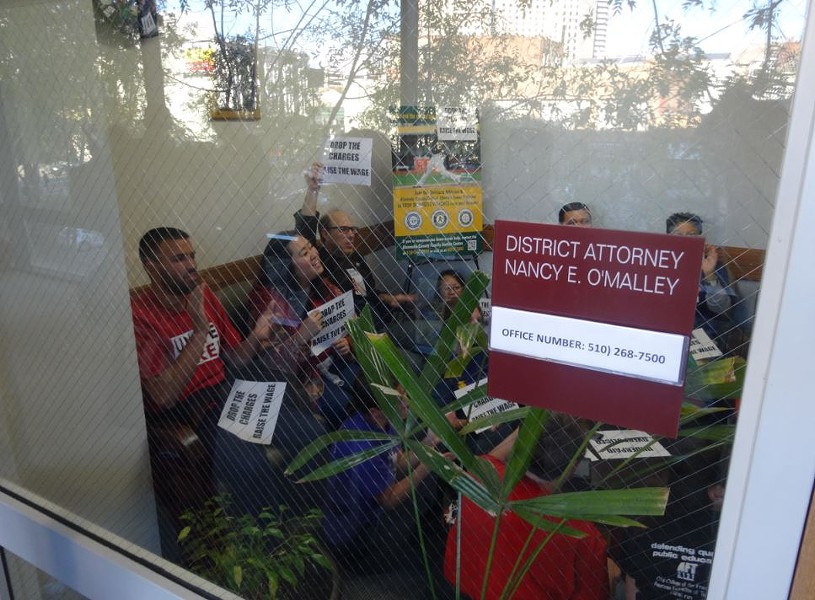 The rally at O’Malley’s Oakland office today coincided with a national day of action by the Fight for $15 movement of low-wage workers who are seeking higher pay and better working conditions. In Oakland and across the Bay Area, fast-food and other low-pay workers held rallies outside restaurants and other employers.

Fight for $15 workers converged on DA O’Malley’s office this afternoon to join members of the Black Friday 14 and their supporters.

During a “Black worker speak-out” in front of the courthouse, protesters talked about connections they see between the struggle by Black Americans against police brutality and inequality in the justice system, and economic inequalities such as low wages.

"This fight cannot be separated from labor's fight," said Millie Cleveland, and organizer with SEIU 1021.