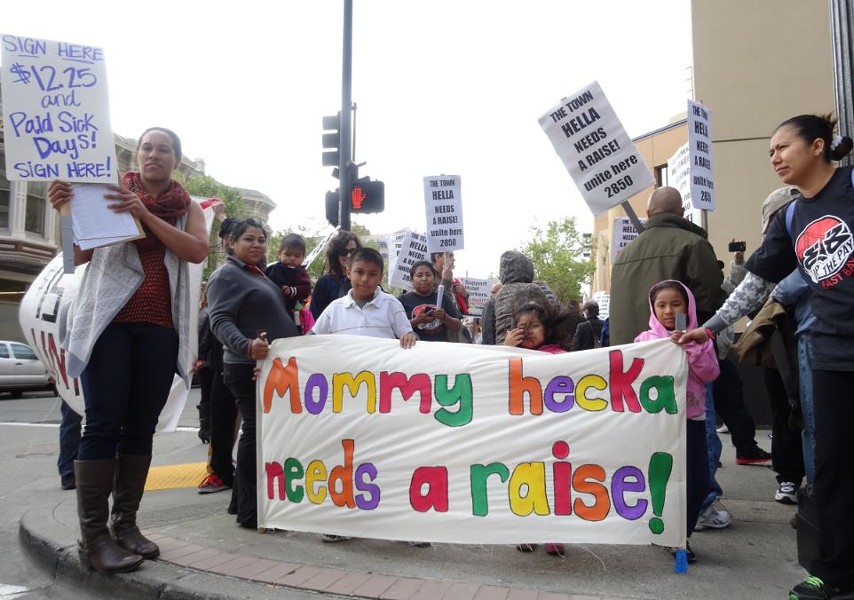 A coalition of low-wage workers and the Service Employees International Union of California filed a ballot proposition yesterday with the California Attorney General that would raise the statewide minimum wage to $15 by 2020, and adjust it upward each year thereafter at the rate of inflation. It would also mandate that employers provide workers with a minimum of six paid sick days per year.

Backers of the initiative said they will begin gathering signatures to put it on the ballot starting in January 2016. If they succeed in gathering the 365,880 necessary signatures, voters could decide on the proposal in the November 2016 presidential election.

The initiative grew out of the Fight for $15 movement which began three years ago in New York City when low wage workers, especially fast food employees, began agitating for better pay and working conditions.

One signatory of the ballot initiative is Shonda Roberts, an employee at the KFC/Pizza Hut located at 2800 Telegraph Avenue in Oakland. Roberts has been a leader among fast food and low-wage workers in the East Bay, helping to organize several local minimum wage campaigns, including Measure FF, which raised the City of Oakland's minimum wage to $12.25 an hour in March of this year.

“We believe that we will win," said Roxanne Sanchez, President of SEIU Local 1021 in a press release. SEIU 1021 represents many public and non-profit employees in the Bay Area, and the union local has provided support to fast food workers organizing in the East Bay. "The people understand that it's time for a $15 wage in California,” said Sanchez.

One possible problem that could confuse voters is a competing ballot measure, the Fair Wage Act of 2016, which is being supported by the union local SEIU-UHW. This initiative would also raise the minimum wage to $15, but only by the year 2021. The UHW ballot initiative does not include sick days.