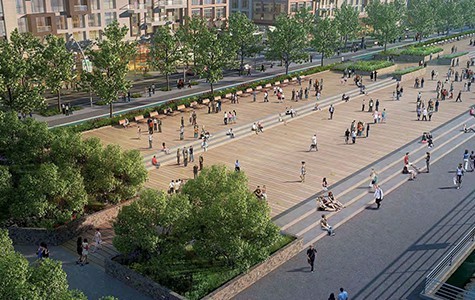 The Oakland Planning Commission last night declined to approve plans for a proposed giant wooden deck along the Oakland Estuary after activists raised concerns that the project's lackluster design could doom it to failure. The wooden deck project at Embarcadero Street near 9th Avenue is part of Brooklyn Basin, the massive mixed-use housing and retail development now underway along the Oakland waterfront, just southeast of Jack London Square. As part of the 64-acre project of Signature Development Group — which is on track to include 3,100 units of housing and 200,000 square feet of commercial and retail space — the developer has proposed to build the giant deck as part of a series of parks along the waterfront, which is currently underutilized and in some places cut off from public access.

The wooden deck, which would roughly be the size of two football fields, is known as Shoreline Park, and it's the first of five proposed adjacent parks in the Brooklyn Basin plan. Shoreline Park will be located on the site of the historic Ninth Avenue Terminal building, which will be mostly demolished as part of the development. Over the last month, park advocates have criticized Signature's proposal for failing to include inviting features or significant greenery.
The planning commission, which must grant final approvals to the park project before the developer can break ground, voted to delay Shoreline Park at yesterday's meeting raising similar concerns about the designs. Officials have not yet scheduled a date for the commission to reconsider the proposal, and it remains to be seen whether Signature plans to enhance the project design in response to the concerns of commissioners and activists. When I reported on the project earlier this month — see "New Oakland Park to be a Giant Wooden Deck" — Signature's vice president Patrick Van Ness told me the company was aiming to break ground on Shoreline Park in spring 2016.

Given the park's somewhat remote location — cut off from the Lake Merritt area by the Union Pacific Railroad tracks and Interstate 880 freeway — activists said the park needs to include features that would establish it as a destination. Representatives of the Oakland Heritage Alliance, the Coalition of Advocates for Lake Merritt, and the East Bay Regional Park District Board, have been the loudest critics of the plan. They've requested that Signature add "shade protection," benches, picnic tables, "wind-protected areas," increased greenery, more trees, a fishing pier, a visible canopy-type entryway, and other features.

Signature, which did agree to add portable umbrella structures to the design in response to activists' requests, has argued that it is limited in what it can do at this site. That's because it is constructing the park on top of a concrete deck above water (which Van Ness said makes it infeasible to do certain types of greenery), and the park is also located on land that is in the "public trust" (which means the State Lands Commission has jurisdiction and prohibits certain kinds of developments, such as playgrounds or basketball courts).

But activists have argued that even within those limitations, there's a lot more that the developer can do — and the planning commissioners seemed to agree. Chris Pattillo, planning commission member and principal with local architecture firm PGAdesign, was critical of the design last night, arguing that if the developer had been more responsive to previous requests for improvements, the project would not need to be delayed.

In recent weeks, members of the city's Landmarks Preservation Advisory Board and Parks and Recreation Advisory Commission have also publicly raised concerns about the Shoreline Park design. According to a summary from activists who attended recent meetings at those two advisory commissions, landmarks board members raised concerns about the need for shade and other structures and declined to approve the plan in its current form. At the parks advisory commission, members called for more public art and a more imaginative design and raised concerns that the huge platform would be uninviting.

Van Ness did not immediately respond to a request for comment. You can read more of activists' concerns here and here, and you can read Signature's full proposal and renderings here.