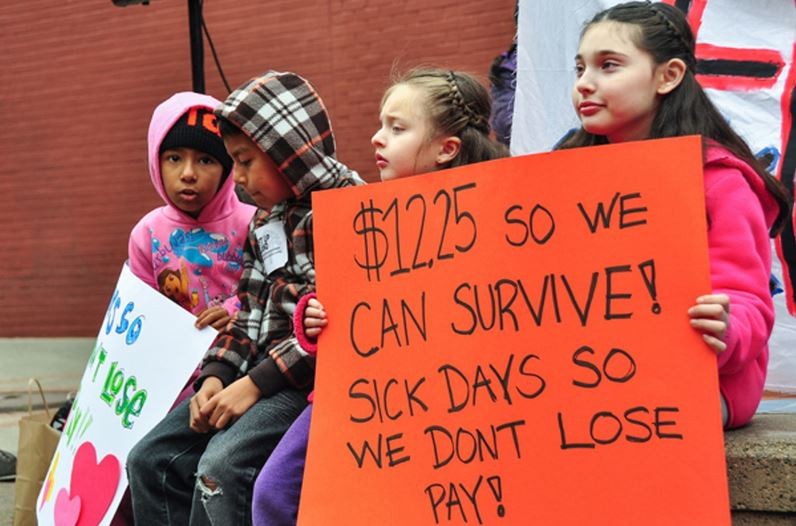 A coalition of community organizations and labor unions announced today that they have filed paperwork to place a proposition on Berkeley's 2016 ballot that would raise the city's minimum wage to $15 in 2017, and then increase it in subsequent years until the minimum wage is the same as the city's living wage. If passed, the measure would institute the highest local minimum wage in the United States.

Berkeley is one of the most expensive communities in the United State to live and work in, especially with respect to home prices and rents. Many minimum wage workers in Berkeley commute from nearby cities where housing prices have also spiked.

Members of the coalition who filed the ballot proposition said they have lost patience with the Berkeley City Council and mayor over the question of when and how to raise the city's minimum wage. They also said that Berkeley's existing minimum wage law lacks features that have made similar laws in nearby cities more successful.

"Our efforts are modeled after the successful campaigns in Oakland and San Francisco which were approved by 82% and 78% of the voters respectively," said Steve Gilbert, a retired SEIU 1021 member. "Our research indicates we can expect the same results in Berkeley.”

Last month, the Berkeley City Council voted to postpone a decision on a proposed minimum wage increase that was similar to what the coalition intends to put directly to voters next fall.

Berkeley's existing law sets the minimum wage at $11 an hour. Next October, the city will increase its minimum wage one final time to $12.53 an hour. But Berkeley's city council didn't peg the city's minimum wage to inflation, meaning that its value will immediately begin declining in 2016.

Unlike Oakland, Emeryville, San Francisco, and other Bay Area cities, Berkeley's minimum wage law also did not include mandatory paid sick leave for workers, nor did it include protections against employers keeping service charges in lieu of collecting tips. Labor unions and workers centers claim that some employers have raised wages by eliminating tips and charging service fees which the business then keeps, instead of the workers who provided the services.

Berkeley's living wage, which the city requires its contractors to pay their employees, is currently $16.37 an hour, or $14.04 per hour if an employer pays at least $2.33 toward employee's health benefits, and it rises with inflation each year. After increasing the city's minimum wage to $15 in 2017, the ballot measure filed today, proposes to increase the wage by an extra 3 percent in order to bring it to parity with the living wage. The two wages would converge sometime after 2020.

Clarification: the original version of this story stated that the Berkeley city council rejected a minimum wage increase proposal last month. The council, however, voted to delay any decision, and take up the issue again in November.