Last week, Oakland police responded to complaints about a small drum circle by Lake Merritt, prompting significant backlash from local activists who argued that the city has been aggressively policing the social activities of people of color in the park. The criticisms escalated this week after residents started circulating photos on Facebook and Twitter of signs by the lake explicitly prohibiting the use of a "musical instrument without a permit." In response, activists are coordinating multiple protests at the lake this weekend to speak out against what they say is excessive policing of barbecues and music at the lake.

Now, however, city officials are saying that the signs in question are old and do not reflect current rules — and that people are, in fact, allowed to play music during park hours.

"There is no prohibition against music while the parks are open from dawn to dusk," Councilmember Abel Guillen told me by phone this morning. Guillen — whose district includes Lake Merritt — said he has fielded numerous complaints from residents about the signs, which he said are five to eleven years old. Drum circles that aren't amplified are permitted, he said, adding that the city plans to remove the outdated signs today. The sign circulating on Facebook is at Cleveland Cascade, which is on Lakeshore Avenue on the east side of the lake.

Here's a photo of the sign in question from Oakland radio journalist Davey D Cook, who has written extensively on Facebook about policing and gentrification around Lake Merritt. 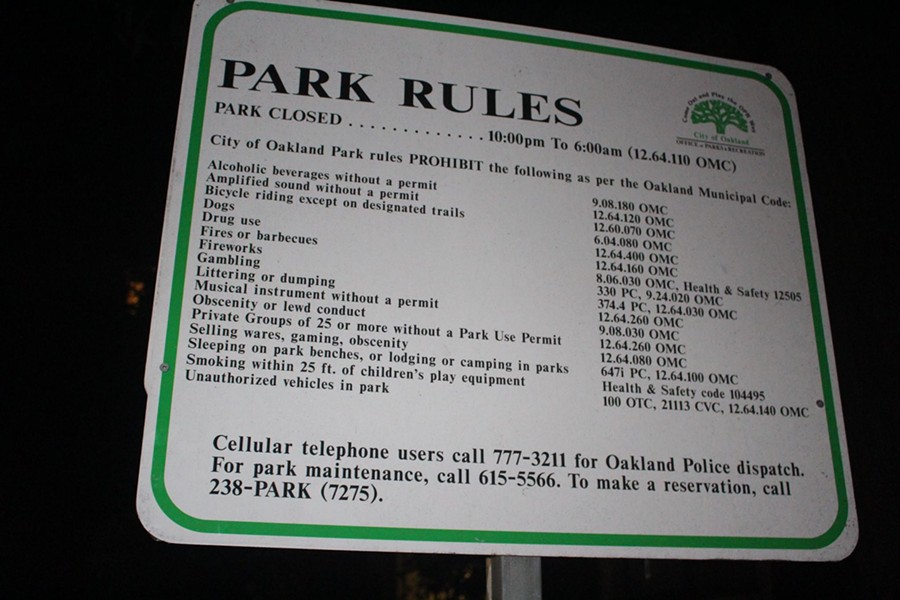 Guillen wrote on Facebook yesterday: "These old signs are still up, causing confusion. We’re finding out that many of the old signs were never removed after City regulations were revised, including outdated signs at Pine Knoll Park. We understand that the City is working to remove the old, confusing signs. Bottom line: There is no prohibition against music while the parks are open 'dawn until dusk,' including the unamplified drumming that has been the subject of recent conversations. A permit is required for amplified sound. ... These rules and the new signs represent the letter of the law, but I also encourage you to practice the spirit of the law and consideration of others when enjoying the park and the neighborhood, especially where public and private spaces intersect. And don’t forget, BBQ's are now allowed in designated areas around Lake Merritt."

Guillen said that Oakland Parks and Recreation officials directly confirmed to him that music is allowed, but also noted that the city's noise ordinance requires musicians to get a permit for amplified music (the music played by Black drummers who drew a response from OPD after complaints by a white resident was not amplified).

Oakland parks officials and representatives from the City Administrator's Office did not immediately respond to requests for comment today. Mayor Libby Schaaf responded to people's complaints on Twitter yesterday, saying the signs were incorrect and apologizing for the confusion.

"I just think we need to exercise common courtesy for neighbors," Guillen told me.

It's unclear if the removal of signs or clarifications from Guillen's office will quell the criticisms and protests. Even if drum circles and other music are technically allowed under park rules, Black residents and activists say that people of color who have lived near Lake Merritt for a long time are now facing police harassment for these types of activities — and that the rise in patrolling is a result of white residents who are newer to the neighborhood increasingly complaining to police. Noise complaints have escalated on Nextdoor.com, a social networking site for neighbors and the subject of this week's Express cover story, which chronicles how white residents are using the website to racially profile their Black neighbors. And in the spring, the city did install new electric traffic signs on the eastern side of the lake, warning that people barbecuing or drinking alcohol would get citations.

As of this morning, 2,000 people on Facebook said they planned to attend a "protest party" scheduled for Saturday afternoon, and another protest scheduled for Monday had 1,500 RSVPs. (Update, 12:20 p.m: The organizers for the Saturday protest have deleted that event from Facebook, but another group has scheduled a “community drum call” for Sunday at 11 a.m.)

In response to activists' concerns about policing around the lake, Guillen told me that the Oakland Police Department has given out very few citations. He noted, however, that OPD has sent out bike patrol officers on the weekend, but said, "It's more about providing information to the public on how to enjoy Lake Merritt for everyone and making sure people understand the rules around barbecues, open containers, and amplified music." He added: "We need to be cognizant of where our public and private spaces intersect. We ... want to make sure we can all enjoy our public spaces together."