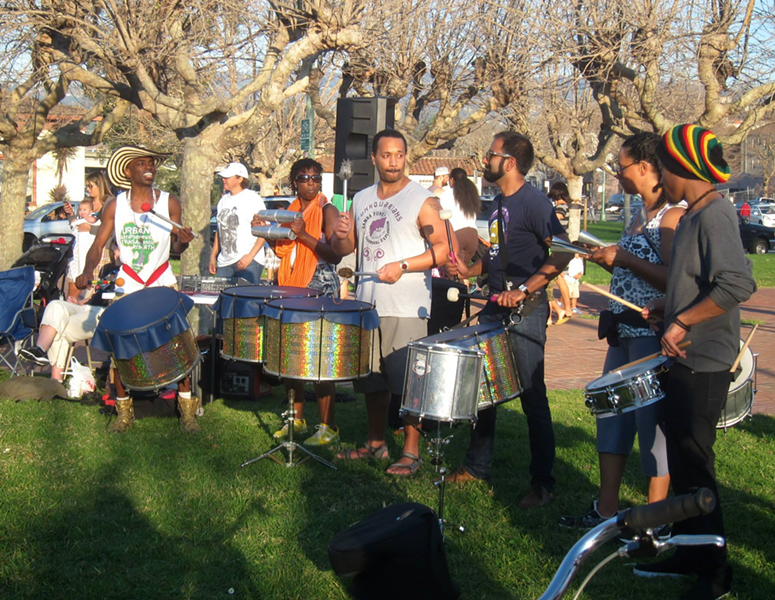 On Sunday night, a white Oakland resident called the Oakland Police Department on a small group of Black and Latino drummers by Lake Merritt, resulting in multiple citations and sparking extensive debates online about racial profiling, biased policing, and gentrification. The story has since gone viral on social media with a Facebook post from local radio journalist Davey D Cook who argued that this case is just the latest example of white residents who are newer to Oakland and the Lake Merritt area complaining about the activities of longtime residents of color — leading to unnecessarily aggressive responses from police.

I spoke by phone this morning with Theo Williams, the artistic director of local group SambaFunk!, who was part of the drum circle on Sunday and had also posted an account of the incident on his Facebook page. Williams, who is Black and grew up in Oakland, said that roughly a dozen OPD officers ultimately responded to the call and that he felt many of the officers had not treated him or his fellow drummers fairly and were clearly biased toward the caller, who is a white man who apparently lives nearby.

An OPD spokesperson told me via email that officers responded to a call at 9:51 p.m. to the 100 block of Lake Merritt Boulevard (the south side of the lake at the Lake Merritt Amphitheater) after receiving a "report of a noise disturbance and an assault." The officers issued multiple citations related to the assault allegations and will have to appear in court before a judge, according to the spokesperson, who did not respond to my requests for additional information.

Williams said that he and about six others — all people of color — started drumming just after 7 p.m. in time for the rare lunar eclipse happening that night. He said they played for about ninety minutes, at which point the white man showed up and allegedly started shouting at them.

"He is screaming and yelling, 'What are you guys doing in the park?! ... Do you have a permit?'" Williams recalled. "I'm looking at him and I'm like, 'Who are you?'" Soon after, according to Williams' account, the man lunged at Williams, grabbed his wrists, and pulled his drumsticks out of his hands. "I said, 'You cannot start grabbing on people and trying to take their personal property.' ... I couldn't believe this was actually happening. ... He said, 'If you don't stop drumming, I'm calling the police,'" Williams said. The man shortly thereafter did call the police on the drummers, and by the time four OPD officers arrived around 10 p.m., the group had already ended the drum circle — not because of the man's demands, but because they were done for the night, according to Williams.

But even though the drumming was over, the conflict only escalated after the police arrived. "The police, of course, didn't hear any drumming," Williams said. "But they immediately began to take the side of this gentleman." Williams said police were hostile toward him from the start: "They shine a light in my face and scream, 'Get back, stay where you are!' ... They immediately assumed because I'm Black, that I'm the perpetrator. ... They just assumed that we had done something wrong." 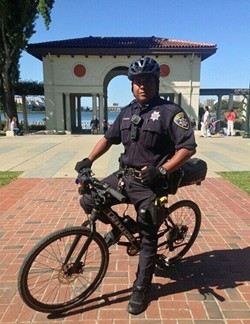 The man who called the police informed the officer that he wanted to press charges against Williams and several others for assault, according to Williams. At that point, Williams said he told the officer that he wanted to press charges against the man who had called police, since that man had clearly attacked him when he grabbed his wrists and drumsticks. "He's the one that came here and assaulted me," Williams said. The other drummers that the man was accusing of assault had not even had any physical interactions with the man, according to Williams. Eventually, at least six more officers and a sergeant showed up to the scene, he said.

The situation escalated further when one of the drummers accused of assault didn't have his ID on him, Williams said. The whole ordeal lasted until 1:15 a.m. and apparently resulted in citations against multiple people who were in the drum circle and the man who had originally called police. I have not yet been able to confirm the identity of the man who called the police or reach him for comment.

Williams — who lives in downtown Oakland and also runs Caribelinq, a group that does local arts consulting and events — said that he and others are now organizing to speak out about the incident at the Oakland City Council tonight. He said he does not believe police treated him and the other drummers fairly. "It looks like another one of these cases where anybody who is white and calls the police and says anything about any person of color, that person is guilty until proven innocent."

In his Facebook post, Cook said that police have been more aggressively patrolling and policing people of color at Lake Merritt for harmless activities, such as amplified sound and barbecuing. As my colleague Darwin BondGraham wrote in May, police started putting up electronic billboards on the eastern side of the lake threatening to cite people for drinking or barbecuing. Those threats also prompted lengthy discussions about gentrification and profiling, with some arguing that police were clearly targeting Black residents through the crackdown on partying.

The drum circle protest is scheduled for 5:30 p.m. tonight outside Oakland City Hall.

Update, October 2, 12:10 p.m.: An individual named Sean McDonald, who said he was the person who had called police on the drummers, has posted a statement in the comments offering his side of the story. His account is below.