1. The Oakland Raiders rejected the financing plan for Coliseum City five months ago — in April — according to a letter from team President Mark Badain that was obtained by the Bay Area News Group$. The Raiders’ rejection letter may be the nail in the coffin for the proposal by Coliseum City developer Floyd Kephart. The A’s have also shown no interest in Kephart’s plan, which was originally designed to create new stadiums for both teams. Badain said in his letter that for the deal to work, the Raiders would need to retain all stadium revenues in order to pay back a $200 million loan from the NFL. Kephart’s proposal, however, calls for using stadium revenues to pay back bonds to be floated by the city and county. 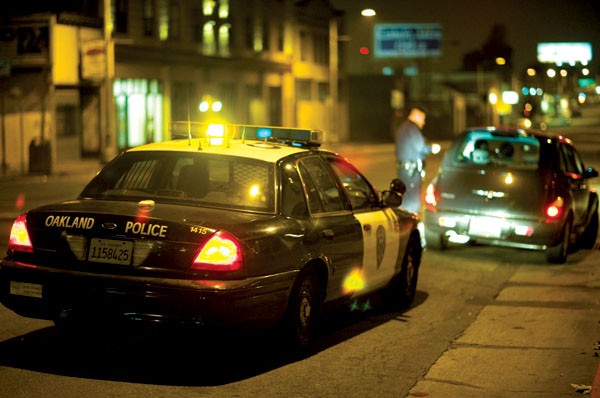 2. Use-of-force incidents involving Oakland police officers have dropped dramatically in the past few years — despite an increase in officer-involved shootings in 2015, the Chron reports. “Between 2009 and 2014, the number of use-of-force incidents recorded by the department dropped four-fold, from 3,902 to 895.” OPD also experienced a substantial drop in officer-involved shootings in 2013 and 2014, although there have already been six this year.

3. OPD has agreed to publicly release the police body camera videos of two recent fatal incidents involving the department, the Chron reports. The videos had been shown to a select group of journalists, and revealed no evidence of police wrongdoing. First Amendment experts have argued that is was illegal for OPD to show the videos to reporters and then withhold them from the public.


4. The legislature sent a bill to Governor Jerry Brown that would make it a felony for a law enforcement officer to delete or alter body camera footage, the LA Times$ reports.

6. Using that new database released by Harris, the Associated Press reports that Blacks are disproportionately targeted by police throughout California and die in custody in disproportionate numbers. Blacks make up just 6 percent of California’s population but represent 17 percent of the people who die in police custody.

7. Black Lives Matter protesters demonstrated at the state Capitol yesterday, urging the passage of a bill that is designed to curtail racial profiling by police, the SacBee$ reports. The legislation, which still must pass the state Senate, would require all law enforcement agencies in the state to collect race data on the people they stop.

8. The legislature also sent a bill to Governor Brown that would bar the state’s two main public employee pension systems — CalPERS and CalSTRS — from making new investments in coal, the SacBee$ reports.

9. The governor also has a bill on his desk that would impose a sweeping ban on ivory sales in California — in an effort to curb the slaughter of elephants in Africa, the Bay Area News Group$ reports.

10. And the East Bay Regional Park District has agreed to purchase a prominent piece of ridge land in the San Ramon area, as the parks system continues its efforts to protect open space from suburban sprawl, the CoCo Times$ reports.