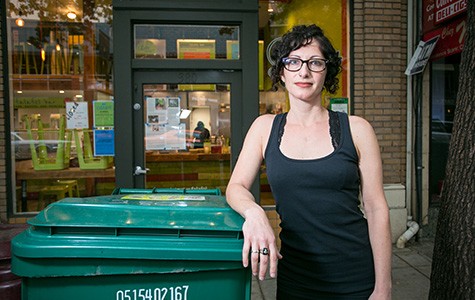 After a loud outcry from Oakland restaurants about the massive increases in composting rates in the city's new trash program, city officials have proposed a change to the prices that would make it less expensive for businesses to sustainably recycle their food waste. As I reported earlier this week, the city's contract with Waste Management, the corporation that now has an exclusive franchise over composting services for commercial customers, brought exorbitant increases to restaurants that had previously used outside haulers for composting. According to a letter that 35 restaurant owners sent to city officials and Waste Management, many of them are now paying as much as 80 to 120 percent more to compost the same amount of materials.

Also troubling was the fact that under the new contract, which city council approved last fall and went into effect on July 1, it now costs businesses more to compost than to throw waste in the trash. For example, businesses with 20-gallon carts picked up once a week now pay $27.97 a month for trash, but $33.84 for compost; or 64-gallon carts with pickups twice a week cost businesses $165.42 monthly for trash, but $198 for compost. These prices, critics said, are environmentally regressive in that they incentive restaurants to stop composting and instead throw food waste in the garbage.

But under a newly published city proposal, which the city council will review on July 20, the city is considering adjusting rates starting August 1 so that the price for businesses to compost would not be more than 90 percent of the equivalent trash costs. That means, if the council approves the proposal, compost rates would decrease to 10 percent below the rates for trash. Karen Stern, Waste Management spokesperson, told me that this reduction would constitute an average 22 percent decrease in the commercial compost rates approved in July. As a snapshot, a business that starting this month has been paying $457.62 monthly for a 96-gallon compost cart picked up three times a week would pay $343 for the same services starting in August. The city's report — you can read the full document here — does not include a full list of the proposed rates, but Sean Maher, spokesperson for the city's Zero Waste Program, confirmed that the compost rates would all be 10 percent below the equivalent trash rates that went into effect this month.

It appears, however, that this is just a short-term solution in response to the intense backlash. Maher wrote in an email: "The City and Waste Management both recognized that the issues raised by the business community regarding compost rates needed immediate attention. We began talks right away and are coming to Council to request permission to open formal negotiations. If Council grants that permission, Waste Management will lower the compost rates they charge to 10 percent below the rates for corresponding trash service effective August 1, and proceed into talks with the City to negotiate permanent solutions that serve all parties."

The emergency ordinance council is considering next week says that the city would return to the council in September with a new proposal that would, effective July 1, 2016, allow Waste Management to "recoup losses that result from lowering the commercial organics collection rates in the preceding 11 months." It's unclear how the waste company would potentially recoup those losses, but a switch to lower composting rates would, in fact, constitute a change to the prices council unanimously approved last September. If the council approves the proposal next week, then the city would presumably negotiate new terms with Waste Management for a longer-term deal that includes lower compost rates, but somehow allows the corporation to regain losses. Maher said he couldn't provide specifics on this.

The new proposal from the city also suggests that beginning July 2016 — when it will be mandatory for businesses to compost under an Alameda County policy — commercial compost rates shift to be only 5 percent lower than the garbage rates "to continue the incentive to move material from the garbage bin to the compost bin to meet the City's Zero Waste goal, yet acknowledging that it would be the law to have the compost service."

The city's proposal under review next week would also restore a discount for low-income seniors that apparently existed in previous contracts, but was eliminated in the new contracts. Maher explained in an email: "Under the previous contracts, low-income seniors could qualify for a 12.5 percent discount on their rates. That discount went away under the new contracts. The City Council recently set aside funding to restore the discount for the first year, and staff is working with Waste Management now on the logistics of applying that restored discount to the bills low-income seniors received in July. Under this proposal, in the subsequent years of the contract Waste Management will provide up to $100,000 annually to continue the discount program."

For more on the controversy over the contract and new rates, read our recent news story, "Oakland's Trash Program Promotes Waste."