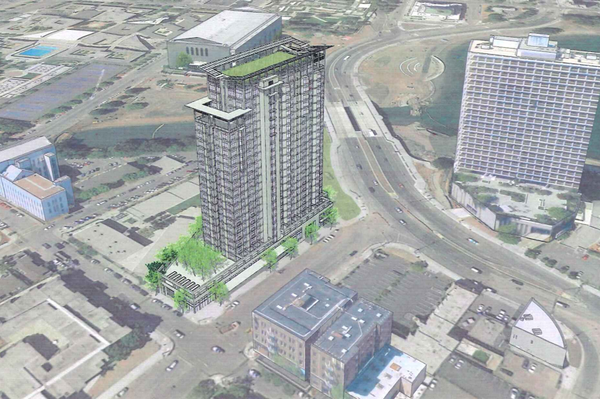 Oakland City Attorney Barbara Parker concluded earlier this year that the city council’s plan to sell an acre of city-owned land near Lake Merritt to the developer UrbanCore for construction of a luxury housing development is illegal under state law, according to a confidential legal opinion that was written by Parker and was obtained by the Express. But city councilmembers and city staffers have nonetheless ignored the opinion of the city’s official legal counsel and have pushed ahead with the controversial deal to build a 300-unit apartment tower. The second and final vote to enter into a contract to sell the public land to UrbanCore is scheduled for the July 7 council meeting.

As the Express first reported in April, critics of the proposed deal with UrbanCore have long contended that the process by which the city solicited bids was in violation of California’s Surplus Land Act — a law that requires municipalities to prioritize affordable housing on surplus property. And Parker, in her confidential legal opinion, came to the same conclusion.

Parker wrote in her February opinion that Oakland is required to offer the land, called the 12th Street Remainder Parcel, to local government agencies that plan to build affordable housing and to affordable housing developers before soliciting bids for the construction of market-rate housing on the site. And regardless of who develops the 12th Street Remainder Parcel, if the project contains more than ten units, a minimum of 15 percent of the units on the site must be affordable to low-income households. Neither of these legal requirements have been followed by the city council and city staffers, despite the fact that the city attorney explained the law to councilmembers five months ago in a closed session meeting.

It’s not clear why the council and the city's administration have chosen to ignore Parker’s opinion. During the past week, the Express called and emailed all eight councilmembers, requesting comment, but none responded. Mayor Libby Schaaf’s spokesperson Erica Derryck wrote in an email that it would be inappropriate for the mayor to comment on matters that were briefed in closed session. Citing her duty to keep attorney-client communications confidential, City Attorney Barbara Parker said, “I can’t provide any information about whether or not we even provided a legal opinion.” Four City Hall sources, however, confirmed the validity of the city attorney’s legal opinion obtained by the Express.

Critics of the luxury housing deal said that the existence of Parker’s legal opinion validates the arguments they’ve been making for months. And they’re frustrated by the fact that councilmembers ignored the opinion and went ahead with the deal. “This is what Eastlake United for Justice and our allies have been saying all along,” said Monica Garcia, a member of the neighborhood coalition that wants the city to prioritize affordable housing on the 12th Street Remainder Parcel. “We would call on the city to postpone the second reading of the ordinance at the very least. There’s no reason to rush ahead.”

According to the city attorney’s legal opinion, the City of Oakland transferred the 12th Street Remainder Parcel to the Oakland Redevelopment Agency in 2011. Redevelopment agencies were never subject to the requirements of the state Surplus Lands Act, therefore the Oakland Redevelopment Agency was not required to offer the site to affordable housing developers. This was traditionally how Oakland had side-stepped the Surplus Land Act’s requirements. The Redevelopment Agency then quietly solicited bids from several developers, including UrbanCore, for construction of market-rate housing in order to maximize the sale price of the land. UrbanCore proposed a 298-unit luxury apartment tower. But according to Parker’s legal memo, the dissolution of redevelopment by the state in February of 2012 meant that the 12th Street Remainder Parcel was transferred back to the city, and therefore any subsequent actions to offer the land for development would have to follow the Surplus Land Act’s requirements.

Nonetheless, Oakland officials chose instead to continue exclusive negotiations with UrbanCore for the luxury apartment project, and not to offer the site to public agencies and affordable housing developers. UrbanCore’s original proposal did not include any affordable housing on or off-site.

Opposition to the proposed deal with UrbanCore boiled over on May 5 when protesters shut down a council meeting in order to prevent a vote that would have approved the sale of the parcel to UrbanCore for $5.1 million. Activists managed to stall a decision on UrbanCore’s proposal until the council’s June 17 meeting. At that meeting, the council voted 6-0-1 to greenlight the sale of the land to UrbanCore, but on the condition that the developer pay an $8 million in lieu fee for affordable housing to be developed somewhere offsite (Councilmember Rebecca Kaplan was absent for the vote and Councilmember Dan Kalb abstained, citing the legal questions surrounding the deal). The vote scheduled for July 7 would be the second and final reading of the ordinance that would authorize this deal.

Throughout the process, city staffers and councilmembers have maintained that the Surplus Land Act doesn’t apply to the 12th Street Remainder Parcel because the property was supposedly never put to use by the city. According to this interpretation of the law, the Surplus Land Act only applies to public property that had a former use, such as a library or parking lot. The City Administrator’s Office has claimed that the 12th Street Remainder Parcel was created after 12th Street was realigned for the Lake Merritt improvement project.

But Parker wrote that this interpretation of the law is wrong. “[T]he 12th Street remainder property clearly qualifies as ‘surplus lands’ under the Act,” Parker’s memo states. “It is a former City right-of-way that is no longer necessary for the City’s use as a roadway.” On this point, Parker concluded that “none of the exemptions in the Act apply,” and that Oakland has a legal duty to offer the property to affordable housing developers and public agencies before entering into a development agreement with UrbanCore.

Zachary Wasserman, a private attorney working for UrbanCore, has also argued that the land was never “surplus property,” and that because the parcel was briefly owned by the Redevelopment Agency, it shouldn’t be subject to the Surplus Land Act. In a letter to the city attorney on February 16 — the day before Parker’s legal opinion was issued — Wasserman wrote that “[w]hen the RFP for the 12th Street Remainder Parcel was issued by the City, the property was owned by the Oakland Redevelopment Agency (“RDA”) — which had acquired it from the City of Oakland and therefore the Surplus Land requirements […] did not apply.”

Wasserman also pointed out that the city entered into an exclusive negotiating agreement (ENA) with UrbanCore in 2013, before passage of AB 2135 last year, a state law that strengthened the Surplus Land Act’s requirements by adding the provisions that 15 percent of the housing built on surplus lands be affordable, if the project includes ten or more units, and that the period of time a city is required to offer surplus land solely to affordable housing developers be extended. Wasserman concluded that [w]hile the ENA does not obligate the city to sell the Property to UrbanCore, the City should not ignore fairness or due process in proceeding with UrbanCore as provided in the ENA.”

On Wasserman’s point about the city’s preexisting negotiations with UrbanCore, Parker concluded that the ENA between Oakland and UrbanCore never required the city to sell the land to the developer and so the city would violate no law if it were to now offer the property to an affordable housing developer. “Accordingly, there is nothing that would legally preclude the City from complying with the Surplus Land Act now by sending out the required offer notices [to affordable housing developers],” wrote Parker. “A city cannot contract away its statutory obligations under state law.”

Parker’s legal opinion concludes with the warning that Oakland is exposing itself to a lawsuit if it sells the land to UrbanCore. “If the City does not comply with its statutory legal duty to offer the 12th Street remainder property, a preferred entity [affordable housing developer] and possibly an Oakland taxpayer could block the conveyance to UrbanCore,” she wrote.

On May 4, public interest attorneys representing Eastlake United for Justice wrote a letter to the city council, expressing concern that the city was in violation of the state Surplus Land Act. The attorneys, including David Zisser and Sam Tepperman-Gelfant of the nonprofit public interest law firm Public Advocates; Mike Rawson of the Public Interest Law Project; and Dan Siegel of Siegel & Yee followed up with a June 2 letter to Oakland City Attorney Parker stating their opinion that Oakland was in violation of the law. They asked the city to fully comply with the law before executing a contract or otherwise transferring the land to UrbanCore. “If the City takes any of these actions without first ensuring full legal compliance, we may ask a court to enforce unfulfilled legal obligations and enjoin the transfer of the parcel.”