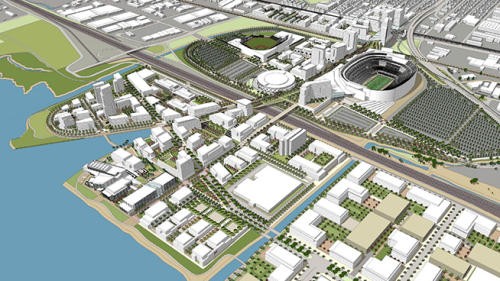 1. Oakland A’s co-owner Lew Wolff said the team has no interest in building a new ballpark at the Coliseum site if the Raiders construct a new stadium there, too, the Trib$ reports. Wolff indicated that the A’s would only be interested in building at the Coliseum site if the Raiders were not there. Wolff’s comments undermine the city and county’s Coliseum City plan, which would include new facilities for both the A’s and the Raiders on the publicly owned property.

2. Wealthy residents in the East Bay are still using huge amounts of water despite the drought — and are using much more water than residents in less affluent areas, the Bay Area News Group$ reports, citing its own analysis. Residents of the wealthy suburb of Diablo have been using a whopping 354 gallons per person per day, compared to just 57 in Oakland and 52 in San Lorenzo.


3. Building experts are calling on Berkeley and other cities to inspect balcony waterproofing work in the wake of last week’s tragedy that left six people dead, the CoCo Times$ reports. The likely cause of the balcony collapse was dry rot caused by inadequate waterproofing. Records show that the City of Berkeley did not inspect the waterproofing at the Kittredge Street apartment building and experts say cities usually do not do so — but that they should.

4. Agribusinesses throughout the San Joaquin Valley are increasingly spraying their crops with toxic wastewater from nearby oil fields, because of the lack of freshwater due to the drought, the LA Times$ reports. A new study shows the oil wastewater contains hazardous chemicals such as benzene and acetone, raising concerns that food crops are becoming contaminated.

5. A massive toxic algae bloom has formed off the West Coast, causing the shutdown of commercial and recreational fishing, the LA Times$ reports. The algae bloom, which is likely caused by unusually warm ocean waters, may also be responsible for the high number of sea lion strandings this year.

6. And Oakland set the world record for a Soul Train dance line on Saturday when 337 dancers took part in an event at DeFremery Park, the Trib$ reports.