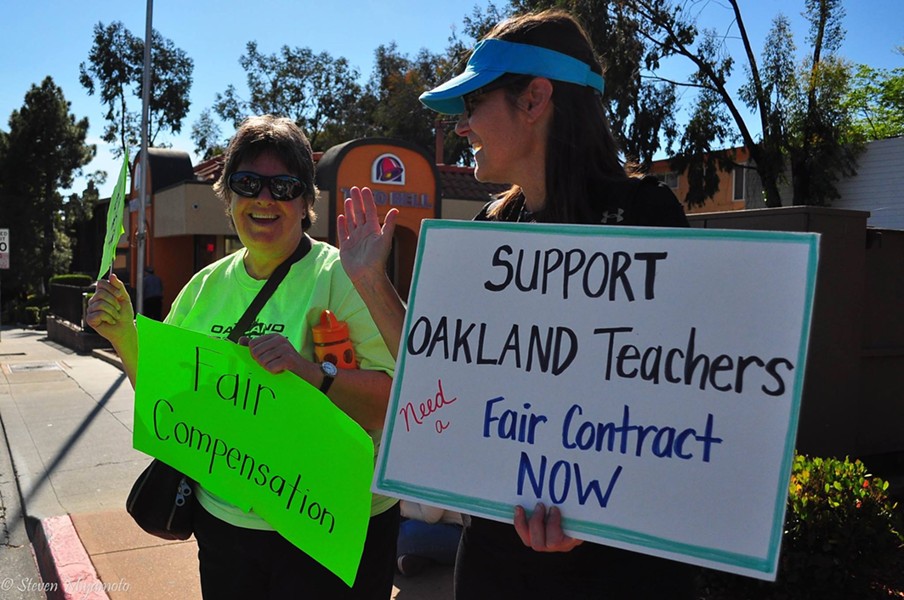 Oakland teachers voted yesterday to approve a new three-year contract that district leaders and union representatives are both celebrating after months of tense negotiations. The Oakland Unified School District (OUSD) and the Oakland Education Association (OEA), the union, announced late last night that 67.5 percent of teachers approved the tentative agreement that officials unveiled last month. Through the new contract — which 820 teachers approved and 394 rejected — Oakland teachers will get salary increases of a nearly 14 percent over the next eighteen months, according to the union. Oakland teachers have consistently had the lowest salaries in the region, and by some measures, some of the lowest of any school district in the country.

The new contract, which extends to the 2016-17 school year, establishes wage increases in phases, including retroactive increases for the past year. A roughly 3 percent increase is contingent on Governor Jerry Brown's 2015-16 budget plan passing as proposed, and there could be additional increases in 2016-17 depending on the amount of state education funding that is made available.

In the announcements last night, the union and the district also praised the new contract for its reduction in class sizes in transitional kindergarten through third-grade classes. The average student-to-teacher ratio in those grades will now be 24-to-1. The agreement also reduces the student-to-counselor ratio to 600-to-1 for sixth grade and above. The contract further places lower class-size maximums on schools with high rates of poverty and high rates if English Language Learners and children in foster care, according to the union.

The contract also resolves one of the most contentious issues — teachers' seniority rights in transfers. While the district had originally proposed a reform that would have dramatically scaled back seniority rights in hiring decisions when filling vacant positions, the final version of the contract largely maintains the existing protections for long-time teachers. The new contract calls for the creation of site "personnel committees" made of parents and teachers that would review candidates and make recommendations about hiring. Ultimately, however, the most senior teachers effectively maintain their rights to take their top-choice position — even if the committee chooses someone else.

Not everyone has praised the decision. A group of teachers last week sent out a press release criticizing the tentative agreement, arguing in part that the salary increases were inadequate and that the contract did not go far enough to ensure reduced class sizes for special ed students.

In a statement last night, OUSD Superintendent Antwan Wilson said: “The approval of OEA members validates this agreement as an important step forward for OUSD’s students and staff, one that will make it easier to identify, develop, and retain top talent and to create the conditions needed to prepare every student for college, career, and community success. This progress is tremendously encouraging, but it’s not the end, it’s the beginning of a process that will transform OUSD into the Bay Area’s premier education employer.”

And Trish Gorham, OEA president, said in a statement: “This agreement is game changing in how we provide for salary increases. We have ensured that any increase in revenue experienced by the district automatically results in a salary increase for our members.”

The agreement will become official if the Oakland Board of Education ratifies the contract at its June 10 meeting.

For more on the agreement, check out OEA's executive summary and OUSD's summary.