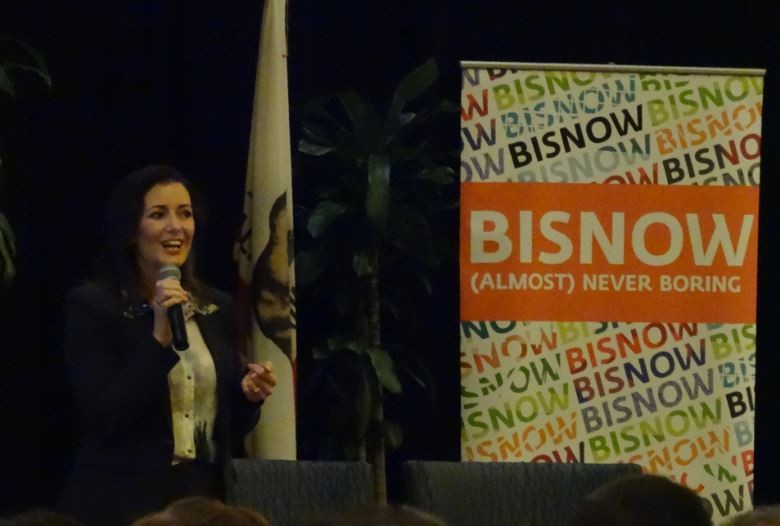 Oakland Mayor Libby Schaaf told an audience of hundreds of real estate developers, lawyers, and investors gathered in Oakland's Marriott Hotel this morning that her administration is working to ensure the economic boom benefits both newcomers and long-time residents. But she emphasized that her administration has already put policies in place to assist developers who want to build in the city’s increasingly hot real estate market.

“Rents and real estate prices are very quickly rising,” Schaaf told the conference, organized by Bisnow, a commercial real estate trade publication. “We want Oakland to grow and revitalize, but we want the prosperity to be shared, to lift up, not to push out our long-term residents.”

Schaaf, who was introduced by Mike Martinez of Bisnow as "your mayor, the woman who is kicking ass," touted Oakland’s efforts to make development easier for big investors. Schaaf pointed to the various specific area plans assembled by the city that streamline project approval for housing and commercial proposals. “It’s like a big welcome mat for you,” she said. “It gives you more certainty as to what the community wants.”

According to Schaaf, her administration has also beefed up the city’s Planning and Building Department to accommodate the growing interest of major developers in Oakland’s real estate market.

John Protopappas told the conference-goers that Oakland is now a destination for tech companies and creative professionals, signaling a potential shift in the city to a real estate market more like San Francisco’s. “This area is now accepted as a place where innovation and creativity is occurring, with many new companies moving to Oakland,” said Protopappas. “People used to say Oakland was the home of the old economy companies, but that’s no longer true.”

Protopappas’s company, Madison Park Financial, has been developing properties in Oakland since 1985, long before tech companies and workers began setting up offices and looking for housing in the East Bay. Protopappas is a close confidant of Governor Jerry Brown. He was also Mayor Schaaf’s finance chairman during her campaign last year.

Seth Hamalian of the Mission Bay Development Group told attendees that for years, it has been difficult to get institutional investors interested in building high-rises and other large projects in Oakland, but that this is changing. Large residential and office buildings are too expensive for individual investors and smaller companies to pursue without backing from major corporate investors, and these bigger investors typically require higher returns on their loans than rents will produce in Oakland. According to Hamalian, because rents are going up in Oakland, large institutional investors are now approaching developers to finance high-rise towers in the downtown and around Lake Merritt.

Whether Oakland’s economic boom will be sustained long enough to attract big league capital remains to be seen. And whether the city’s leaders are actually serious about instituting developer impact fees, inclusionary zoning, stronger rent control, and other policies to make the boom more equitable, is also an open question.

Correction: The original version of this story mistakenly capitalized the letter n in Bisnow's name. It is not capitalized.