Civilians Are Finally In Charge of Complaints Against Oakland Cops. Kind Of. Not Yet.

Last night, the Oakland City Council approved a long-awaited measure to centralize the intake of complaints against Oakland police officers with the Citizens Police Review Board, taking the crucial oversight role out of the hands of OPD’s Internal Affairs Division. The measure that passed, however, was very different from the proposal originally approved by the council in 2011, and from what the council considered again as recently as April of this year. Instead of providing five new staff positions to help CPRB handle complaints, the resolution passed last night only provides CPRB with one new position.

The back story to this reform is deep. Here’s a summary.


In 2011, the council voted to centralize intake of all complaints with the CPRB. In order for the CPRB to handle this task, the council allocated $1,468,158 for the board to hire new staff, including intake technicians who would process the larger number of complaints. But then City Administrator Deanna Santana blocked the measure after the then-federal- court-appointed compliance director, Thomas Frazier, opposed the move. Frazier said it could interfere with Oakland’s court-mandated police reforms. As a result, nothing happened in 2012. The CPRB continued to linger in the shadows, unable to provide a central, civilian-run place to receive complaints against police officers.

Then in October 2013, the council voted to take $497,020 of the original funds meant for the CPRB and give this money instead to OPD’s Internal Affairs Division so that OPD could continue handling intake of complaints against officers. The CPRB was effectively prevented from implementing the council’s original decision to centralize the complaint intake process.

In February of this year Councilmember Noel Gallo brought the original proposal back, asking that the 2011 decision to centralize complaint intake with the CPRB be “reaffirmed,” and that full funding be provided so that five intake technician positions in OPD’s Internal Affairs Division could be transferred to the CPRB. The proposal seemed to be moving ahead smoothly until the April 21 meeting of the city council, when the item was suddenly and unexpectedly withdrawn from the agenda following a closed-door session of the council. 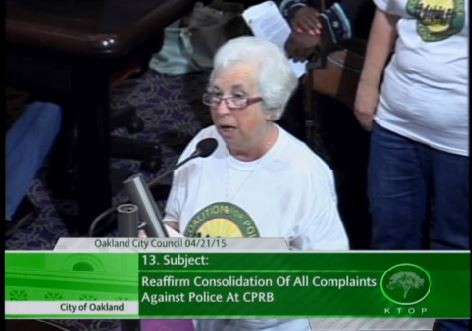 Rashidah Grinage of the Coalition for Police Accountability asked the city attorney at that meeting why the item had been withdrawn. A representative of the city attorney’s office said that in closed session the councilmembers heard concerns that civilianizing the complaint intake process could negatively impact the city’s compliance with the court-ordered reforms (the same thing Thomas Frazier said years ago), and furthermore that the city considered the transfer of the intake technician positions from OPD to CPRB as a matter requiring a “meet and confer” session with the Oakland Police Officers Association and other city unions.

Grinage bristled at these suggestions by the city attorney, and the fact that the decision to pull the item was made in closed session, giving the public no notice or ability to comment.

According to Grinage, the Oakland Police Officers Association has been opposed to strengthening the CPRB, and had attempted to get the proposal blocked by Judge Thelton Henderson in 2011. Grinage alleges that when the OPOA's gambit failed, the union struck a deal with Compliance Director Frazier to block the complaint intake proposal. Grinage said that she believed OPOA was once again working behind the scenes to delay or scrap the plan. Grinage told the councilmembers in April:


“$497 [thousand] of those dollars were hijacked by Tom Frazier in collusion with the OPOA who had already gone to Judge Henderson in 2011 to get it stopped. And when they failed to get Judge Henderson to sign on to stopping it they got Tom Frazier to do it for them. You owe the CPRB $497,000 that was diverted and given as an early Christmas present to the Oakland Police Department.”


Last night, when the proposal finally came back to the council for a vote, it was clear someone behind the scenes worked hard to change it, yet again.

"It’s not everything we wanted, but it breaks the logjam we’ve had the past four years, assuming it gets implemented," Grinage told the Express about last night's vote. "We will be keeping a close eye on this making sure we don’t have repeat performance of legislation without implementation."

“The city council prioritizes the demands of OPOA over the demands of the citizens,” said Mollie Costello of the Alan Blueford Center for Justice, a member of the Coalition for Police Accountability, after last night’s vote.

“You have the residents of Oakland overwhelmingly saying we want civilian oversight over OPD," added Costello, "yet we have some members of the council listening to OPOA, and taking the original proposal and watering it down.” Even so, Costello said last night’s vote was a small step in the right direction.

The Oakland Police Officers Association hasn’t responded to multiple requests from the Express for comment about their position.

The vote last night sets a timeline to provide the CPRB with access to all complaints currently filed against Oakland police officers. By the end of September CPRB expects to have full access to OPD’s Internal Affairs Division database. By November the new intake technician will be working for CPRB.