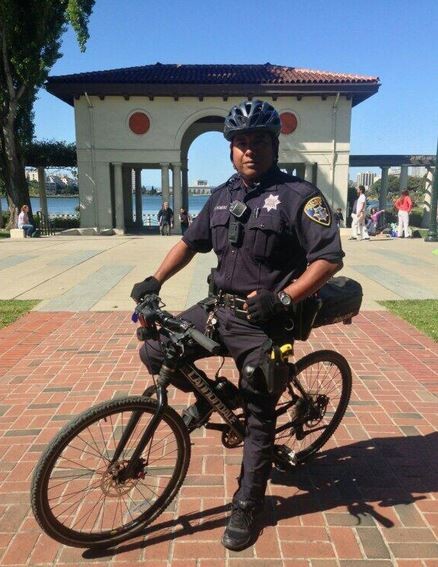 For several weeks, the Oakland Police Department has parked multiple electric traffic signs on the eastern side of Lake Merritt warning that anyone barbecuing or drinking alcohol would be cited. The move is meant to cool down what has become one of Oakland’s hottest social scenes: picnics on the grassy knolls along Lakeshore Avenue, between El Embarcadero and East 18th streets. Thousands of people typically hang out there on weekends, often staying late into the night.

But some of these partygoers have apparently been dumping charcoals in the bushes and lake. Others have been leaving behind piles of litter. (Admittedly though, the city hasn’t provided enough trash cans there). Neighbors who live up the hill in Cleveland Heights and on Lakeshore Avenue have complained to the city about the noise and garbage. Last month the city invited KRON’s Stanley Roberts to shame the litterbugs by filming the aftermath of one weekend’s revelry.

“We don’t want to bring the hammer down,” Kristine Shaff, spokesperson for Oakland’s Department of Public Works, told the Express. “It’s all kinds of people who are abusing something that should be a real jewel,” she said of Lake Merritt, where Oakland has spent about $120 million in bond money on landscaping, streets, and foot and bicycle paths since 2002.

“Having some music? Heck yes, it’s Oakland,” said Shaff. “But blasting it until late at night?”

So far OPD isn’t cracking down very hard. Lieutenant Chris Bolton said over Twitter that OPD has “spent time & energy informing & preventing rather than ticketing.” According to Hoang Banh, a neighborhood services coordinator for OPD, police have issued zero tickets for barbecuing by the lake in 2014 and 2015. “Officers arrive at 10am before people set up their barbecues in order to inform them about the existing rules,” Banh said in an email. But on May 16 and 17, OPD did issue six citations for alcohol at the lake and made nineteen "contacts" with people to tell them barbecuing is illegal.

Fair enough. But then again, it’s amazing that police are dedicating any resources to stopping people from grilling ribs and drinking a beer by the lake when only 3 percent of reported burglaries were assigned to an investigator last year, and 80 percent of reported robberies weren't investigated.

The lakeside parties started in 2013 when the widening of grassy areas along Lakeshore Drive was completed. By mid-2014, neighbors began complaining about "drumming," un-permitted parties (you need a permit to gather in groups of 25 or larger), and "illegal vendors," among other concerns, according to OPD.

But the eastern shore of Lake Merritt has actually been a popular hangout spot for decades — long before funding from Measure DD allowed the city to widen the lawns. Oakland plugged the last sewers spitting feces into the lake in 1898, issued bonds to purchase the surrounding land in 1907, and dredged the lake bottom uniformly around 1909. Ever since then, the shore of Lake Merritt has been the singular chill spot in the Town. This is probably also why it’s one of the most contested public spaces.

Many see the new crackdown on partying by the lake as a direct attack on Black Oaklanders’ right to gather in the city's newly beautified center. In a lengthy Facebook post, radio journalist Davey D Cook noted that increased numbers of people were barbecuing and drinking beer at the lake since it was “rechristened” several years ago, but that the impetus behind today’s crackdown has obvious racial tones now that the crowds are becoming more colorful. “All these newcomers were out there grilling, playing music, doing Yoga and calling Lake Merrit [sic] Delores Park east,” Cook wrote. “Soon as Black people showed up [the neighbors and city] made it an issue.” According to Cook, residents at the 1200 Lakeshore luxury apartment tower even tried getting a 4th of July celebration shut down last summer because it was expected to draw thousands of Oaklanders, many of them non-white.

Councilmember Lynette Gibson McElhaney disagreed with much of Davey D’s post, responding to him on Facebook: “We've been receiving complaints from park users about the amount of trash and debris on the weekends. One recent complaint was from a parent of a toddler scorched by hot coals left in the park.” According to Gibson McElhaney, the crackdown at the lake is more complicated than a story of white homeowners vs. Black revelers. “Many of the residents at 1200 Lakeshore are Black,” she wrote. “They are old Oakland. Some of the BBQers are white and new and often not even residents.”