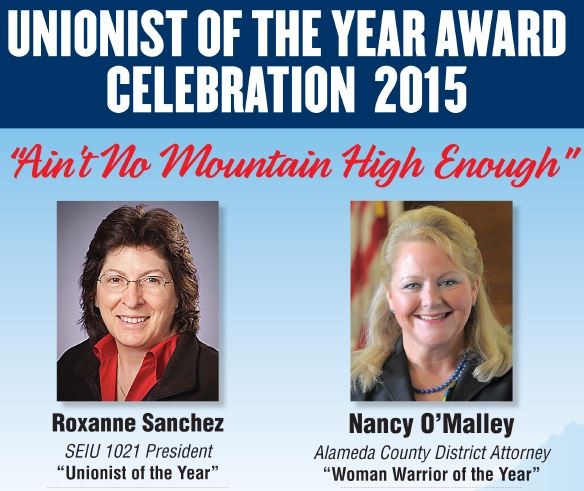 Alameda County District Attorney Nancy O’Malley is on the bill to receive the “Woman Warrior of the Year” award from the Alameda Labor Council at its awards celebration tonight in Oakland. But multiple sources say she has been un-invited because of her refusal to drop charges against the Black Friday 14 protesters who disrupted BART train service in West Oakland on November 28 last year.

Sources within several unions that belong to the Alameda Labor Council, who asked not to be identified, confirmed that the group has withdrawn its invitation to DA O’Malley.

“The Black Friday 14 case, in my opinion, is an example of the state trying to quell, repress, and scare young black activists, and to try to keep us from continuing the work that we’re doing in the streets,” said Vanessa Moses, one of the Black Friday 14 protesters. “But these actions in the streets,” she said, referring to disruptive protests, “this is what’s producing the indictments of the officers in Baltimore and other actual changes.”

O’Malley did not respond to several emails seeking comment. Teresa Drenick, a spokesperson for the DA’s office said, however, that the Black Friday 14 protesters will still be charged for delaying BART.


In February, the BART board of directors dropped their request to the DA that she seek $70,000 in restitution from the protesters. But the board is still asking O’Malley to press misdemeanor charges of trespassing.

Josie Camacho, executive secretary-treasurer of the Alameda Labor Council didn’t return a phone call or an email seeking comment about the labor group’s pushback against O’Malley.

East Bay labor unions have shown support for Black Lives Matter demonstrations, most recently with a shutdown of the Port of Oakland on May 1 by the International Longshore and Warehouse Union Local 10.

The Berkeley City Council passed a resolution on January 20 calling on O’Malley to drop the charges. At an Oakland City Council meeting on January 24, Councilmember Desley Brooks pressed BART director Robert Raburn to drop the $70,000 restitution demand and charges against the protesters.

By contrast, O’Malley, who has been rumored as a possible candidate for California Attorney General in the next election, has said she will press charges to the fullest extent against Black Lives Matter protesters who break any laws.

Walter Riley, attorney for the Black Friday 14, said he thinks that it is still possible that O'Malley will drop the charges. "I think there’s enough people mobilized, and who have voice and leverage in this community, telling her that what the Black Friday 14 did was a symbol of resistance to racism."

"This shows that there is a growing commitment from organized labor to support the Black Friday 14," added Riley. "But it also shows labor's support for the Black Lives Matter message against the targeting of Black people by law enforcement, and an end the discrimination in our communities."

“With the BART board stepping back on restitution, with the Baltimore indictment, all that has happened due to public pressure,” said Moses. “I’m very hopeful and confident that the people will move [DA O’Malley] too because the space she has to continue on the wrong path is shrinking.”