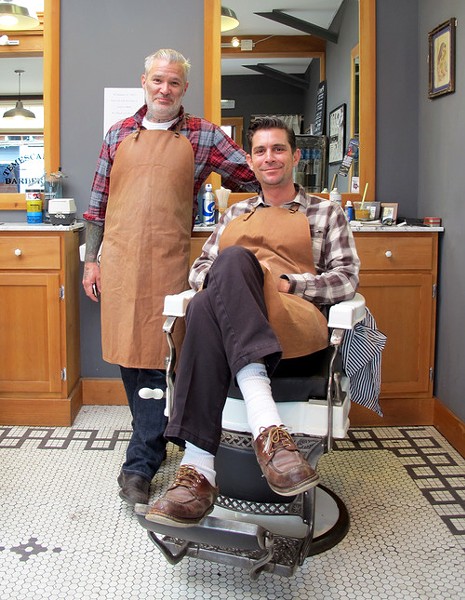 Update, Friday May 8, 9:40 a.m.: Search crews successfully rescued Temescal Alley Barbershop co-owner Nicholas Vlahos and his two young children on Thursday night in a remote and rugged area of Tahoe National Forest, according to the Bay Area News Group. Despite cold temperatures and some snowfall, all three of them were apparently in good spirits and healthy. They were first reported missing on Tuesday after they failed to return home to Alameda County from a camping trip. An Air National Guard helicopter spotted the family's truck last night around 8 p.m. and airlifted them to safety, NBC Bay Area reported. The children, a five-year-old boy and three-year-old girl, appear to be doing well.

Original post: Nicholas Vlahos, co-owner of Oakland's Temescal Alley Barbershop, and his two young children did not return from a Sierra County camping trip earlier this week, prompting a multi-agency search that has extended for two days, according to officials. The sheriff's office in Sierra County — which is about 200 miles northeast of Oakland, near the Nevada border — reported today that Vlahos and his five-year-old son and three-year-old daughter were first reported missing on Tuesday evening after they failed to return home to Alameda County.

The sheriff's office said the family was last seen in western Sierra County traveling in a 2015 Black Toyota Tundra pickup truck. Vlahos had planned to take a drive through a "remote and rugged portion" of Sierra County and Plumas County on their trip home, the sheriff's report said. The terrain there is apparently treacherous and snowy, according to NBC Bay Area, which confirmed that Vlahos is the co-owner of the popular North Oakland barber shop known for its retro-style haircuts. Leah Bershad, wife of the barbershop's co-owner Bradley Roberts, told the station that Vlahos had planned to return to work on Wednesday and had sent Roberts a text message indicating that he planned to take some off-road routes on his trip.

After receiving the report that Vlahos, 41, and his children were missing on Tuesday at around 7:15 p.m., the sheriff's office said it immediately launched a search along the route the family was expected to take, but was unable to locate them or the truck. Yesterday, the sheriff's office, the California Highway Patrol, and the California Department of Forestry and Fire Protection (Cal Fire) also conducted a joint search along the route and the surrounding areas. That search included a CHP helicopter flight, but was unsuccessful.

You can read the full alert from the sheriff's office here.