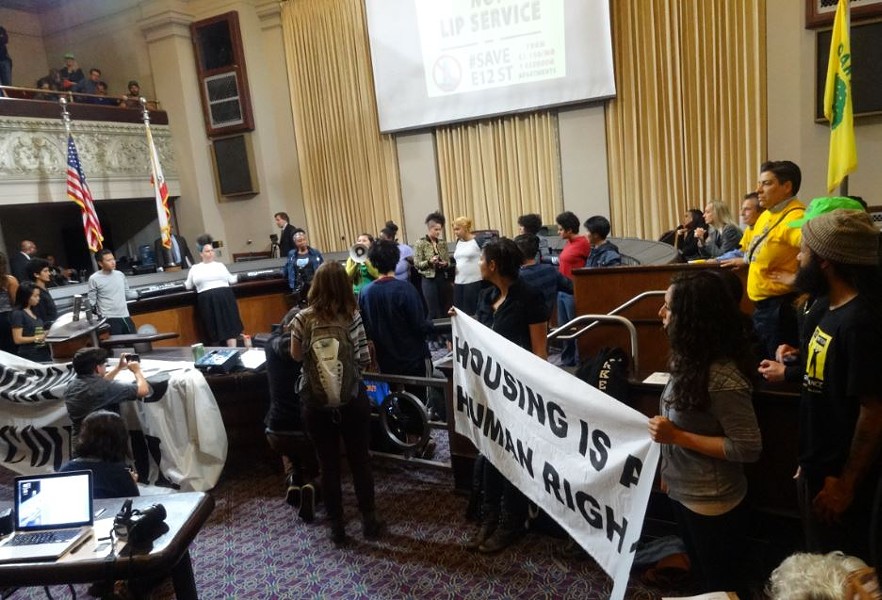 More than 75 demonstrators shut down the Oakland City Council meeting last night, forcing councilmembers to adjourn the meeting before conducting any business, including their expected vote to sell city-owned land on East 12th Street near Lake Merritt to a developer proposing 298 luxury apartments. On the agenda also was a watered down measure to strengthen the city's Citizens Police Review Board (CPRB).

Seconds into the meeting, protesters rushed from their seats and locked themselves to each other in front the dais, chanting, “I believe that the people will win.” They unfurled banners that read, “Development Without Displacement” and “Black Power, Not Blaxploitation.”


Mari Rose Taruc of East Lake United for Justice, a community group opposed to the land sale, said rents are rising in Oakland and pushing out longtime residents. She said that so far the city's elected officials have failed to take action on the affordable housing crisis. “We need to have a people's council meeting because the city council wasn't hearing us,” she said.

The shutdown happened just after Mayor Libby Schaaf finished describing her recently released proposed city budget. Flush with new revenue from the city's economic boom, Schaaf is proposing to pay down debts and reinvest in services. Her main goal is to grow Oakland's police force. This will require a 3 percent increase in police spending next year, bringing total police expenditures to $241 million by the 2016-2017 fiscal year. Schaaf's budget assumes that the city-owned land on East 12th Street will be sold to fill the general fund, the main source for paying police and other city services.

“We know these deals are done behind closed doors,” said Josh Healey, an Eastlake resident, of the agreement to sell the land to developer UrbanCore. “So these folks,” he continued, pointing to half a dozen protesters who locked their arms together in pipes in front of the council dais, “aren't blocking anything. They're opening the process up.”

About twenty minutes into the protest, council President Lynette Gibson McElhaney recessed the meeting, but most of the councilmembers lingered in the chambers, listening to what the protesters called the “people's meeting.” The group, about one hundred in number, let various people speak to the rebellious assembly.

Mollie Costello, a police accountability activist, told the protesters she supports strengthening the CPRB. On May 6, 2012, three years ago exactly, an Oakland police officer shot and killed eighteen-year-old Alan Blueford. Blueford’s family, along with Costello and a coalition of community groups, disrupted several city council meetings later that year demanding answers. At last night’s meeting, Costello told the protesters that a strengthened CPRB, had it existed in 2012, would have taken control over the investigation into Blueford’s killing away from the Oakland Police Department and put it in independent hands.

Over loud singing of "Which Side Are You On," Desley Brooks made a motion to adjourn the meeting which the remaining council members approved. Brooks left the meeting shortly after. Gibson McElhaney relocated to a conference room downstairs to meet with a small group of protesters. Two police officers guarded the door and would not admit anyone, including media.

Councilmember Noel Gallo wasn't upset by the shutdown. He stayed and listened intently as speakers addressed the more than one hundred people in the chambers about Oakland's housing crisis and police accountability.

“Some of their concerns are legitimate, for example the process by which the land is being sold,” Gallo said, referring to the East 12th Street deal, which appears to violate state and city laws and involves a developer who gave illegal what appear to have been illegal campaign contributions to Oakland politicians. Gallo shrugged off the fact that the city's meeting was cancelled. “I was doing what they're doing when I was a young man,” said Gallo smiling, wearing a Warrior’s T-shirt that read: “Strength in Numbers.”

Councilmember Rebecca Kaplan said outside the chambers that she was disappointed the meeting was cancelled. “But the issues they're upset about are much more important,” she added. She would not say what position she plans to take on the land sale when it eventually comes to a vote. Kaplan came to the meeting with a proposed motion to, “send a letter to all known affordable housing providers and developers, and ask them if they have the interest and ability to develop new affordable housing in Oakland should land become available, and use the list of potential developers for future parcels.”

Not everyone on the council was so sanguine about the protest. “People have been working on civilianizing the complaint intake process for years,” said Councilmember Dan Kalb, referring to the proposal to put the CPRB in control of complaints against the police. “This demonstration is unnecessary, and very long, and they prevented a vote on something they probably support.” Kalb called the protest “anti-democratic.”

Rashidah Grinage of the Coaltiion for Police Accountability was also upset that the protest prevented a vote on the CPRB item. “Their cause is right, but they made their point an hour ago,” said Grinage, clearly frustrated. “I feel like our issue has become a hostage of their issue.”

The CPRB item, however, had been drastically downsized in recent weeks. The original proposal, when it was brought back before the Public Safety Committee in March, called for reaffirming the Council’s 2011 decision to centralize all complaint intake with the CPRB. The measure would have transferred five intake technician positions from OPD to the CPRB, giving the citizen board the staff it needs to accomplish this task. At the April 21 meeting of the City Council, this version of the CPRB legislation was pulled from the agenda after closed session discussions.

In other words, OPD loses nothing, and CPRB would only gain one intake technician. Even so, Grinage said the vote last night would have been progress. “An incremental victory is still a victory,” she said.

“I had no part in this, but I think it's great,” said Mike Hutchinson about the protest. Hutchinson has been trying to stop the sale of city and school district owned land to UrbanCore for more than a year. He said he's also a supporter of the measure to strengthen the CPRB, but he and other felt a sense of urgency with the imminent vote on the East 12th Street land. “I think this is long overdue,” Hutchinson said about the disruption. “It may be inconvenient, delaying the city council from voting, but maybe delaying them isn't a bad thing.”