FEMA Approves Funds to Thin Trees in East Bay Hills, Rather than Clear-Cutting 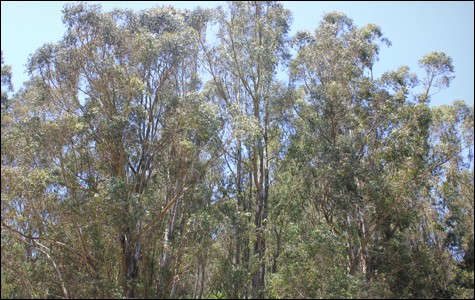 The Federal Emergency Management Agency announced today that it has approved roughly $5.6 million in grants aimed at reducing wildfire hazards in the East Bay hills. The grants will fund tree thinning, including the thinning of eucalyptus groves, rather than clear-cutting — as originally proposed by the University of California and some neighborhood groups.

FEMA's decision comes ten years after UC, the City of Oakland, and the East Bay Regional Park District submitted applications for the funding. The news is a significant development in the prolonged and contentious debate about how best to manage the vegetation in the hills and prevent the kind of devastation that occurred in the 1991 Oakland hills firestorm — which killed 25 people and destroyed thousands of homes.

FEMA announced today that it has finalized what's known as a "record of decision" for the East Bay hills vegetation projects, meaning the agency has completed its extensive environmental review of the proposals and will allow a range of vegetation management projects to move forward. You can access FEMA's record of decision and final environmental impact statement here. UC Berkeley had submitted two grant applications — one for a 56-acre area of Strawberry Canyon and another for a 43-acre area of Claremont Canyon. Oakland proposed six projects in Alameda County near the Contra Costa County border, totaling 358 acres.

There have been many disagreements over the years about the best methods to reduce wildfire risks, with much of the debate centered on eucalyptus trees. Some have advocated for the clear-cutting of non-native trees (like the eucalyptus) while others have pushed for more limited removal and thinning of non-native trees. UC Berkeley and the Claremont Canyon Conservancy, a neighborhood association, have generally aligned in support of the strategy of eradicating the non-native trees.

Here's a summary of the approved proposals from FEMA, which has called for a "unified methodology" to coordinate the different projects:


The proposed action consists of both the hazardous fuel reduction by vegetation management work as described in the four grant applications, and the connected actions comprising additional vegetation management activities that are not part of the grant applications but are selected by the [applicants] as the best way to manage their high fire risk lands considering the relationship of those lands to other proposed or connected areas. Together, the proposed and connected actions would provide more effective protection over a large area by creating a continuous firebreak along the most vulnerable wildland-urban interfaces.

All three [applicants] propose to reduce fuel loads and fire intensity, primarily by thinning plant species that are prone to torching, and by promoting conversion to vegetation types with lower fuel loads. In many areas the proposed and connected actions would preserve oak and bay trees and convert dense scrub, eucalyptus forest, and non-native pine forest, to grassland with islands of shrubs.


The proposals also call for the use of herbicides, which officials would apply during the initial process and during follow-up maintenance efforts, according to FEMA. Here's a map of the sites in question, from the environmental review document:


It took FEMA 10 years to make this decision. While we are pleased that funds finally will be released, the thinning or so-called unified approach means that maintaining a fire-safe community will be much more costly and that cost will have to be born by the property owners and the cost will be perpetual unless all the eucalyptus trees in a given area are removed. The grants will not be increased to cover this cost. Furthermore, thinning means that some eucalyptus trees will remain thereby preventing more fire-safe native bays, oaks and willows to replace them. This is a half-hearted decision.

For more on the approved proposals, you can check out this executive summary from the environmental impact report and review other FEMA document's here.

And here's a lengthy statement FEMA sent to constituents today on its decision and the process that led to it. It also includes locations where members of the public can view copies of the reports:

The East Bay Hills are subject to repetitive, severe wildfires that kill people and destroy homes. The proposed action with the required mitigation measures is the environmentally preferable alternative and would meet the purpose and need of the grants to mitigate the hazards at which it is aimed. FEMA’s decision, based on factors including environmental, economic and technical considerations, and the agency’s statutory mission aimed at addressing fire risk hazard in the study area, is to proceed with the proposed action, consisting of the proposed vegetation management work. FEMA recommends funding the four grant applications, with the exceptions noted below, and will provide funding for eligible activities through the PDM program and the HMGP.

The proposed grants were submitted to FEMA by the State of California on behalf of the named sub- applicants and are as follows:

The Record of Decision documents FEMA’s decision to proceed with the proposed action, which constitutes vegetation management work, and recommends funding the four grant applications with the exception of one project area known as Frowning Ridge.

Although FEMA analyzed Frowning Ridge throughout the Environmental Impact Statement, this parcel has been rendered ineligible for funding under FEMA’s pre disaster mitigation grant program. In August 2014, UCB was found to have implemented extensive fuel reduction measures prior to the issuance of the final EIS, including removal of approximately 600 trees and application of herbicide to stumps. Actions initiated or completed prior to compliance review and documentation under the National Environmental Policy Act (NEPA) are ineligible for FEMA funding per FEMA policy on grant program administration.

As part of the grant evaluation process, and in order to reach a determination on providing federal funding, FEMA is required by law to comply with the National Environmental Policy Act (NEPA), which mandates that Agency decision-makers be fully informed of the environmental consequences of their decision to approve and fund such grants.

To satisfy uncertainties raised by the public concerning potential effects on the environment and public health of the proposed wildfire risk reduction projects, FEMA initially prepared an environmental assessment (EA) in 2010. That was followed by the more comprehensive Environmental Impact Statement (EIS) finalized December 2014. The process included multiple public meetings and outreach activities to educate, encourage and invite public comment on the draft environmental impact statement about potential impacts of proposed and connected projects. FEMA published the draft EIS in April 2013. Following the release of the Draft EIS, a public comment period which ended on June 17, 2013, yielded more than 13,000 individual comments from members of the public regarding the proposed projects. The comments were organized and responded to under the following general topic areas: biological resources; fire and fuels; geology, seismicity and erosion; water resources and water quality; air quality, climate and microclimate; historic properties; aesthetics and visual quality; socioeconomics; human health and safety; public services, utilities, and recreation; land use and planning; transportation; noise issues; cumulative impacts; project alternatives; public involvement; federal funding; and grants management.

One of the major revisions to the draft EIS, influenced by information gathered during the public process, is to request that all applicants implement a phased approach to addressing flammability of designated tree species. Some applicants had originally proposed an eradication methodology to completely and immediately remove the “overstory,” which FEMA determined did not satisfy the purpose and need for the grant of fire reduction, and therefore did not meet hazard mitigation program eligibility requirements. Therefore, FEMA requested all subgrantees to adopt a “unified methodology,” modeled on EBRPD’s proposed “thinning” approach.

This identification and analysis of various options for implementation is consistent with the requirements of the NEPA decision-making process that must be followed before federal funding can be awarded. Thus, based on input and issues raised during the public comment process, and in consultation with the grantee, subapplicants, and cooperating federal agencies, FEMA requested revision to the vegetation management methodology for two of the three sub applicants – City of Oakland and UC Berkeley. The revisions align the proposed projects with the thinning alternative, the approach originally proposed by East Bay Regional Parks District as described in the Draft EIS.

Funds for the four grant applications will be awarded to the California Governor’s Office of Emergency Services as the grantee. Funds will be subject to CalOES’ internal financial procedures prior to subgrantee award. Continued availability of the funds is contingent upon FEMA’s standard and specific conditions for all four grants, as described in the Record of Decision.

The final record of decision is available on the web at: https://edit.fema.gov/environmental-planning-and-historic-preservation-program/environmental-documents-public-notices-5.