After a tense dispute with Kaiser Permanente, the California Nurses Association announced today that it has approved a three-year contract that includes the addition of hundreds of new registered nurse positions and a substantial pay increase for workers. For months, nurses at Kaiser — the Oakland-based healthcare giant that runs hospitals across California — have staged protests and strikes demanding better working conditions for nurses and improvements in patient safety. In Oakland, where Kaiser opened a new medical center last summer, nurses have repeatedly argued that they are dramatically understaffed and that the hospital has become too reliant on faulty technology, making it difficult for nurses to adequately care for patients.

The agreement today covers 21 Kaiser hospitals and 65 clinics across Northern and Central California — a collective bargaining unit of 18,000 registered nurses and nurse practitioners, the largest in the country. The union, which is part of the National Nurses United, said that nurses "overwhelmingly approved" the new pact in membership meetings last week.

The agreement includes the addition of 540 registered nurse positions, which the union noted was a significant gain given that many hospitals have recently frozen nurse hires. Over the three years covered in the contract, nurses will also receive 14 percent pay increases, which includes a 5 percent increase retroactive to January 1 of this year. The contract was originally set to expire last summer, but was eventually extended to October. Negotiations began last August.

In addition to staffing and pay increases, the new agreement also brings "groundbreaking health and safety provisions," the union said in its announcement. That includes a new "accidental death and dismemberment benefit" for registered nurses and other workplace protections for workers exposed to infectious diseases like Ebola. Kaiser nurses across California went on strike last fall, amid the contract negotiations, to call for better Ebola protections. Critics of Kaiser have long argued that, despite its nonprofit status, the massive healthcare organization makes huge profits and thus has revenues available to improve patient care and working conditions at its hospitals. 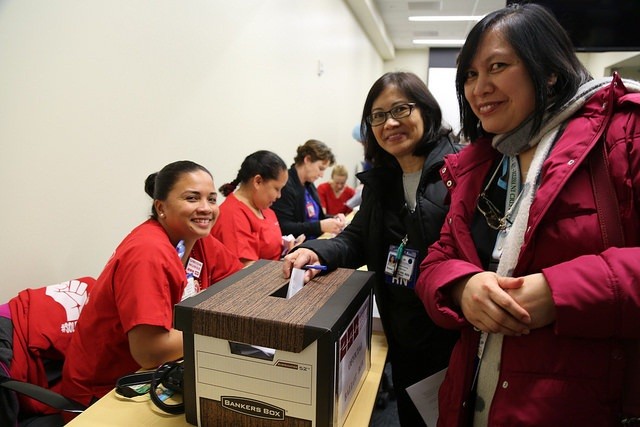 The contract also establishes a new nurses' committee that will work with Kaiser management to address concerns about care standards. The agreement further expands an existing "quality liaison program" made up of nurses who work on patient safety issues. It also includes a new provision for annual paid release time to allow 25 nurses to participate in the Registered Nurse Response Network, which is the union's disaster relief program that has dispatched nurses to US and international disasters (including Hurricane Katrina and the Haiti earthquake). This paid release time benefit is the first of its kinds in the country, according to the union.

The announcement of the approved contract comes on the heels of protests in Oakland this month spearheaded by the National Union of Healthcare Workers, the union that represents a range of Kaiser workers, including mental health clinicians and social workers. Those workers have gone on strike, with support from nurses, to protest understaffing and lengthy wait times for patients seeking mental health care. (Last year, Kaiser agreed to pay a $4 million fine after the state determined that patients had to wait for excessively long periods between therapy appointments).

In its announcement today, the nurses' union said it is committed to helping the healthcare workers' union achieve a contract agreement.