Opponents of shipping crude oil by rail chained themselves to the gates of Richmond’s Kinder-Morgan rail yard on September 4, blocking oil tanker trucks from entering or leaving the facility for more than two hours. The following day, however, they suffered a setback when a San Francisco County Superior Court judge threw out a lawsuit filed by four environmental organizations against the Bay Area Air Quality Management District. The suit charged that the air district acted illegally when it approved Kinder-Morgan’s plan to bring in highly explosive Bakken crude oil without public notice or environmental review. The community did not learn of the presence of Bakken crude until eight months after the air district gave its secret approval to Kinder-Morgan’s plan.

A bill recently passed by the legislature, however, seeks to prevent this kind of under-the-radar shipment in the future by requiring that railroad companies notify state and local officials about crude oil and other hazardous materials coming through their communities.

At 7 am last Thursday, eight protesters chained themselves to gates of the Kinder Morgan rail yard to prevent tanker trucks from entering or leaving — four demonstrators locked themselves to the gates with bicycle U-locks around their necks and four more locked to them. Others stood in front of the gates. 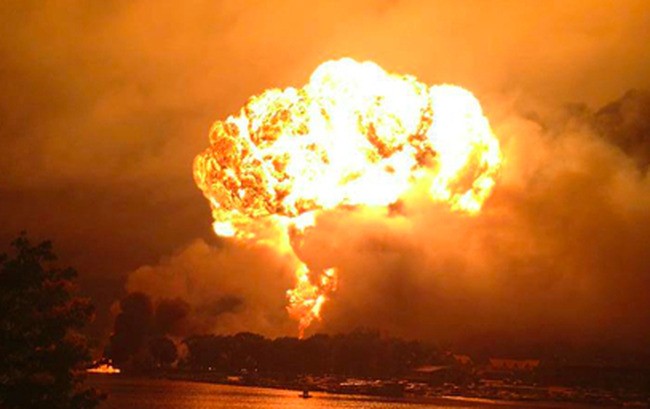 “We’re here to stop the process of bringing crude by rail into Richmond because it’s too dangerous,” said Andrès Soto, an organizer for Communities for a Better Environment (CBE), whose neck was locked to the gates. Katy Polony, also locked to the gates, said that with trains carrying Bakken crude, “there’ve been many explosions in the past year. The most significant one was at Lac Magantic in Canada that killed 47 people.” In addition to the immediate local danger, protesters said, fracking worsens the climate disruption that is already causing disastrous storms, floods, and droughts.

When Richmond police arrived on the scene they were “as usual, a delight to work with,” wrote protester Margaret Rossoff in a later email report of the incident. The police, however, said they did not have jurisdiction because the lockdown was within fifteen feet of railroad tracks and therefore governed only by federal police. The federal agent who arrived later said trespassers in the rail yard would be charged with a federal felony, which CBE’s lawyer confirmed could carry a sentence of up to twenty-five years.

“We were prepared for trespassing citations but not for decades behind bars,” Rossoff said, so the protesters unlocked and left, after the federal agent demanded and received their personal information. While negotiations were going on, Richmond Mayor Gayle McLaughlin arrived at the site. “I very much appreciate this organized effort of nonviolent civil disobedience today,” she said. “I applaud the protestors. We shouldn’t have these trucks rolling over our city streets with this Bakken crude in them that’s so explosive.” Earlier this year, the Richmond City Council voted to ask the federal government to stop the shipments.

Many of the protesters expressed appreciation for the support they received, not only from the mayor, but also from the four Richmond police officers on the scene. “I believe that without the intervention of the Richmond police, we would all be facing some [federal] charges at this point,” Rossoff said. Steve Nadel, another protester, added, “This is the only demonstration I’ve been to where a row of cops shook hands with us as we left, like a wedding reception.”
The protest was timed for the day before a San Francisco County Superior Court hearing on a lawsuit filed by the Sierra Club, Communities for a Better Environment, the National Resources Defense Council, and the Asian Pacific Environmental Network against the Bay Area Air Quality Management District for approving the shipment of Bakken crude oil without public notice or environmental review.

The air district granted the permit in July 2013 but community groups did not learn about the presence of Bakken crude until it was revealed in a March 2014 KPIX news story. Two weeks later the environmental groups filed their lawsuit, but last week San Francisco County Superior Court Judge Peter Busch ruled against them. Busch said their suit had to have been filed within 180 days of the air district’s decision to greenlight the Kinder-Morgan plan — even if the district’s approval was done secretly.

But if Governor Jerry Brown signs AB 380, passed by the legislature September 4, railroad companies in the future will be required to report to state and local emergency officials on what kind of oil and other hazardous materials are being shipped through their jurisdictions. If they will be carrying Bakken crude they would also have to report ahead of time the exact quantity and timing of the shipment. The bill would also require railroad companies to send the state a written emergency response plan.

In other crude-by-rail news, the city of Pittsburg has put on hold at least until next year the proposal by Wespac to build a crude oil transportation hub in a residential neighborhood near downtown. In August, the Contra Costa Times quoted City Manager Joe Sbranti as saying, "Right now, we're kind of in a holding pattern and waiting for a green light from the applicant.” Opponents speculated that might mean WesPac had run into so much opposition they were considering abandoning Pittsburg as a site for the project.

And across the Carquinez Strait in Benicia, city officials have extended to September 15 the public comment period on the proposal by Valero to add rail shipment facilities to its local refinery. In addition to Benicians for a Safe and Healthy Community, organized to oppose the project, the city received letters expressing concern from the Sacramento Area Council of Governments, the City of Davis, the Yolo-Solano Air Quality Management District, the Yolo County Board of Supervisors, and more.