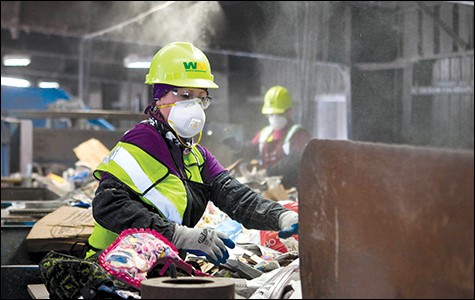 The dirty fight for Oakland's trash just got a lot messier. Waste Management, the Texas-based corporation that currently collects the city's trash, filed a lawsuit this morning against the City of Oakland, weeks after the City Council awarded the entire $1 billion waste contract to a different company, California Waste Solutions (CWS). The council unanimously voted against the recommendation of city staffers when it chose CWS, a company that has never had a residential garbage contract before and was, based on the city's analysis, ill-prepared to do the job starting July 1, 2015.

And according to the lawsuit filed today, CWS was not only the inferior choice, it also illegally won the bid as a result of the city violating numerous provisions of its own request-for-proposals (RFP) process.

CWS, an Oakland-based company that currently does half of the city's residential recycling, ultimately proposed cheaper rates than Waste Management — a key reason councilmembers favored it. But, as I outlined in my latest piece on the subject, "Oakland's Garbage Gamble," critics of CWS have argued that the lower rates may come at a price for Oakland — possibly in the form of uncollected trash on Day One or longer-term environmental consequences, such as poor rates of diverting reusable materials from the landfill. CWS and Waste Management were the only two companies to bid on the lucrative contract.

Waste Management is now reiterating those concerns in its lawsuit and going a step further by outlining a number of alleged violations by city officials in this drawn-out, bidding process.

"You have a defined, legally approved process that wasn't followed," John Lynn Smith, outside counsel representing Waste Management, told me by phone. "And consequently the results of that process are not authorized."

The crux of the lawsuit is that city officials shared Waste Management's confidential information with CWS while negotiations were ongoing, allowing CWS to improperly incorporate this information into its own final proposals, which the council ultimately selected. The suit argues that when the council rejected the city's initial contract recommendations in May, asking for better proposals with cheaper rates, the city responded by "abandon[ing] its authorized procurement process in favor of giving CWS a second bite at the apple."

In addition to this "unauthorized second chance," in a "blatant denial of procedural fairness and to provide a clear advantage to CWS, the City Council forced City Staff to reveal [Waste Management]'s confidential and proprietary information to CWS," the suit continues, later adding that city Councilmembers Rebecca Kaplan, Dan Kalb, and Lynette Gibson McElhaney, specifically asked the city to violate the rules of the RFP process when they demanded new, negotiated contracts from the city at the end of the process.

Ultimately, Smith said, the final contracts with CWS are "the product of negotiations largely between Waste Management and city staff to come up with a refined, sophisticated, detailed contract."

The suit also attacks the city for allowing CWS to, at the last-minute, propose a partnership with Republic Services Group, an Arizona-based corporation that chose not to bid on Oakland's waste contracts in the first place. CWS, which is scrambling to get its needed facilities in place by next summer, said that if its proposed interim waste facility was not ready in time, it would use a Richmond recycling facility that Republic Services operates. Further, CWS plans to send its trash to Republic's landfills in Livermore and Bay Point. (Waste Management already operates a transfer station and landfill in the region).

Because Republic Services did not go through the lengthy RFP process, the city cannot legally allow the company to come in as a subcontractor at the end of the process, according to Waste Management. "The purpose of meeting [RFP] requirements is that the city gets the opportunity to properly vet whoever it is that is proposing," Smith said.

The lawsuit, filed in Alameda County Superior Court, calls for an appeal of the ordinance awarding the contracts to CWS. The petition names the City of Oakland, the city council, the city administrator, and the Public Works Department as defendants. You can read the full lawsuit here.

"Council needs to go back to square one and understand that if they are going to make revisions, they need to be done by the proper, approved process," Smith said.

Reached by phone this afternoon, a spokesperson for the Oakland City Attorney's did not immediately have a comment on the lawsuit.