1. Fourteen large wildfires are raging in Northern and Central California, burning a combined area of nearly 120,000 acres, the LA Times$ reports. Two big fires are scorching Shasta County in Northern California in extremely dry conditions. Governor Jerry Brown declared a state of emergency over the weekend because of the fires, many of which were started by lightning strikes. The large fire in Yosemite National Park that was threatening a historic sequoia grove is now mostly contained. 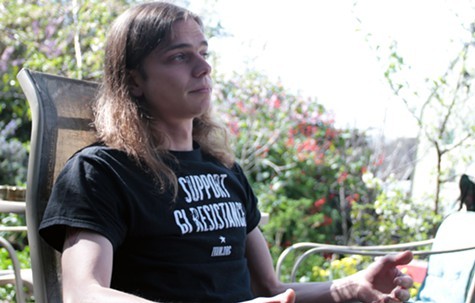 2. Iraq War veteran Scott Olsen, who suffered a fractured skull and permanent brain damage when he was shot by an Oakland cop during an Occupy Oakland protest, decried a judge’s ruling last week that ordered the reinstatement of Officer Robert Roche, who had been fired for lobbing a flash-bang grenade at Olsen and the people who tried to rescue him, the Trib$ reports. In a YouTube video, Olsen noted that Roche had been involved in three previous fatal shootings.

3. Caltrans is getting ready to unveil the first stage of its Smart Corridor plan for Interstate 80 in the East Bay, which will feature large signs that warn motorists about accidents, debris, and blocked lanes, the Chron reports.

4. A bill in the state legislature would bar law enforcement agencies from using aerial drones for surveillance without a warrant, Capital Public Radio reports (via Rough & Tumble).

5. And President Obama admitted that the CIA tortured prisoners during the Bush administration and confirmed that he has no plans to hold anyone accountable for violating national and international laws, Andrew Sullivan notes.