Very bad news tonight for the thousands of East Bay families who are fans of Berkeley Tuolumne Family Camp. It burned down today, according to John Miller, spokesman for the US Forest Service. Owned and operated by the City of Berkeley, the beautiful and popular camp along the Tuolumne River near Yosemite National Park has been around since 1922. But today, it fell victim to the massive Rim Fire, which is still burning out of control in the Sierra. 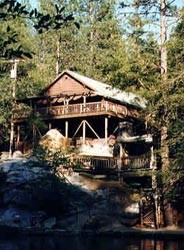 The Rim fire has now been raging for more than week and has spread to more than 133,000 acres, making it one of the largest wildfires in California history. Several camps near Berkeley Tuolumne Family camp remain in peril, including San Francisco's Camp Mather, San Jose Family Camp, and Camp Tawonga. On Friday, one of the buildings at Camp Tawonga burned down, but the the USFS was unsure this evening as to the rest of the camp's status.

Update 8/26 9:05 a.m.: KGO-TV has video this morning of the destroyed Berkeley Tuolumne Family Camp. It looks like a total loss. Fire officials said the camp burned to the ground yesterday afternoon.

Update 8/26 10:30 a.m.: Fans of Berkeley Tuolumne Family Camp have created a memorial Facebook page for people to share their thoughts, photos, and memories. The page was created by Rachael and Ari Nava of Santa Cruz (full disclosure: they're my niece and nephew). The two met at camp as teenage counselors two decades ago, and have returned each summer to camp ever since. Ari Nava was the first to call me last night with the news that the camp had burned, and then I called USFS to confirm. Ari had been monitoring the fire closely for the past week.