A blog posted today in Berkeleyside raised an interesting question: How will Berkeley businesses fare this fall, now that Cal is playing all of its home games in San Francisco?
The Berkeley stadium closure will mean better parking around campus, less drunken carousing, and fewer signs of the Cal-Stanford turf war. That said, the loss of foot traffic might negatively impact Berkeley businesses, particularly hotels, restaurants, and bars around Telegraph Avenue. Retail stores that sell Cal merchandise might also take a hit, though it probably won't be quite as dramatic. According to Berkeleyside, the visitors' bureau is currently looking at alternatives, like showing the games on large screens and trying to recreate the excitement of Big Game day — albeit in Petri dish form. We'll see if that helps retain any portion of the 60,000-70,000 Bears fans who usually descend on Berkeley each year. 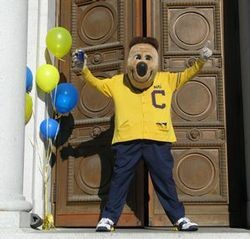