1. An Alameda County judge has halted a plan by Caltrans to cut down six hundred trees in Niles Canyon in order to widen state Highway 84, the Chron and Argus report. Environmentalists have argued that the $80 million widening project will destroy wildlife habitat along Alameda Creek and that Caltrans has failed to conduct adequate environmental studies. Judge Frank Roesch ruled that the environmental groups can go forward with their lawsuit against Caltrans. The transit agency maintains that the widening project is needed to make Niles Canyon Road safer. 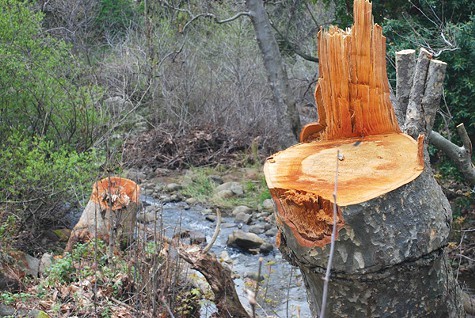 2. The BART board of directors has tabled plans for late-night train service after a federally required civil rights study determined that the proposal would harm low-income riders. The Chron reports that the BART board postponed discussion of the late-night service proposal until July 14. At issue is whether running trains late on Friday and Saturday nights will force BART to begin train service later on Saturdays and Sundays. The civil rights study concluded that starting trains late on the weekends would unfairly harm low-income commuters who need to get to work early.

3. The Oakland City Attorney’s Office is about to start sending letters that warn about the dangers of prostitution to the homes of people who cruise the city looking to hire sex workers, the Trib reports. Police, public officials, and community groups hope the letters will help stem the growth of prostitution in Oakland.

4. The Cal Bears were eliminated from the college baseball world series yesterday, but not before the team made an amazing run toward the championship, considering that the university nearly eliminated the sport this spring.

5. And some East Bay residents are being treated to an unusual sight — condors flying in the skies above southern Alameda County. The Merc reports that some of the giant rare birds, with their ten-foot wingspans, have flown north from their home at Pinnacles National Monument, south of San Jose.