The cannabis industry most people know consists of two people: the buyer and the seller. To a certain extent, that hasn’t changed. But, as the industry becomes legitimate through regulation and legalization, there is a lot more than just marijuana being bought and sold.

Last week, Oakland was host to the fourth annual National Cannabis Industry Association Cannabis Business Summit and Expo, and it’s 4,500 attendees. The grand ballroom at downtown’s Marriot City Center brimmed with almost 250 businesses, each posted up for two days to convince business owners and consumers that they can contribute to the rapidly expanding industry.

In fact, all the samples that edibles companies gave out were non-infused, meaning they included zero THC or CBD. A demo of a hydroponic-growing tank sprayed water on the suspended roots of Marigolds, not pot plants. And even the industrial vacuum sealer demonstration included a bag of moss instead of bud.

“I’m from Humboldt, and we used to be a small group of businesses catering to the growers, everyone knew everyone,” explained Kelly Nicholson, the North America sales director of Autogrow, a company that’s been selling nutrient-dosing machines for agriculture for more than twenty years. “Now, there’s tons of new people — and I know maybe six booths.”

This is one of the many side effects of taking the cannabis industry out of the shadows and putting it in the hands of the government. Cova, for example, is a company that launched last week. They sell software to dispensaries so that they can ring up customers with a point-of-sale program on touch-screen tablets. Its parent company, iQmetrix, has its software powering 19,000 wireless retail locations.

“Legalization and regulation are really legitimizing the industry, and that is attracting talent from other industries,” said Brandon Carroll, co-founder of Yofumo, a company that sells curing boxes for already-harvested cannabis.

Carroll’s product is an example of how Prop. 64 is expanding the scope of the cannabis industry. He and his business partner, Yofumo CEO Alfonso Campalans, both came from a background in financial-management software. The chief engineering officer, Alex Grey, built satellites before joining the company.

His actual product is a gun safe-sized box, which starts at $5,000 and can hold up to six pounds of cannabis for curing, or drying. The boxes remove all of the yeast, mold, and bacteria, leaving only the plant matter, cannabinoids, and terpenes. But he says it also creates a more aromatic marijuana flower: he opened a Harborside bag which he called “the control” and it smelled like good pot, but it was nothing too special. Then, he opened a jar of nugs that had been cured in the Yofumo box — they smelled like a fresh cherry blossom.

Campalans first had the idea for the box some four years ago, when he saw a need in the industry: Everyone focused on the growing process, and no one was looking at how the cannabis is treated before it reaches the consumer. Work to design the boxes began two years later, and the company launched nationally this week, selling every machine they brought to the summit. Recognizing a void and working to fill it seemed to be a common theme for businesses at the conference. Mike Newton used to grow his own cannabis, to help with his back pain, until he realized six months of work only yielded him one month’s supply. He became determined to maximize yield, while at the same time making the growing process fluid and easy. Newton founded Bella Toka and began manufacturing the Grow Box last week, a tool that can hold up to seven plants and is designed for that very purpose.

Simply put, the grow box is two pots of soil stacked on top of each other with a screen in between, and a rack on top of the pots similar to a cage used with tomato plants. The screen removes the hassle that normally comes with growing marijuana of transferring the plant to a bigger pot for the flowering process.

“When it’s time to begin flowering, you just pull this out,” Newton’s business partner Evan Andrea explained as he removed the screen, allowing for the roots to extend down into more soil.

But even though many of the exhibits featured products that would interact with cannabis in some way, there was one company that had nothing to do with tangible pot.

Mentor Capital is a group that invests in cannabis businesses and works to help take them public. CEO Chet Billingsley founded the company in 1985. Before entering the cannabis world in mid-2013, he invested in cancer research and treatment companies.

“In the world of cancer, cannabis is a godsend,” Billingsley told the Express. He said by bringing his Wall Street background to the cannabis industry he feels he can do more good than previously.

But investing in cannabis businesses is a little bit different than other types of companies. Mentor Capital acquires an interest in larger, private cannabis companies, provides them with funding, and helps them prepare their accounting and board structure so that they can eventually be spun off as a stand-alone public company.

Cannabis companies could also remain with Mentor Capital, who asks for 5 percent of the company’s equity, which Billingsley said is about half what it costs to go public through other methods, such as a reverse merger.

He said now is the perfect time for smaller companies like his to get in to the industry, because it is not yet clear exactly how the federal government, under President Donald Trump and Attorney General Jeff Sessions, will act with regards to cannabis businesses.

“The big guys and the medium guys have got too much to lose,” he said.

Throughout the two-day summit, discussion of Trump was sporadic. Kayla Bertsch, a horticultural engineer for Solexx, a company that’s sold plastic greenhouse coverings for over two decades, said she feels “scared about the sustainability and the future of the industry” because of the current administration.

Indeed, a lot is unknown when it comes cannabis and Trump. But another president came to the NCIA summit last week, and he was not silent about his view of the future of the industry. 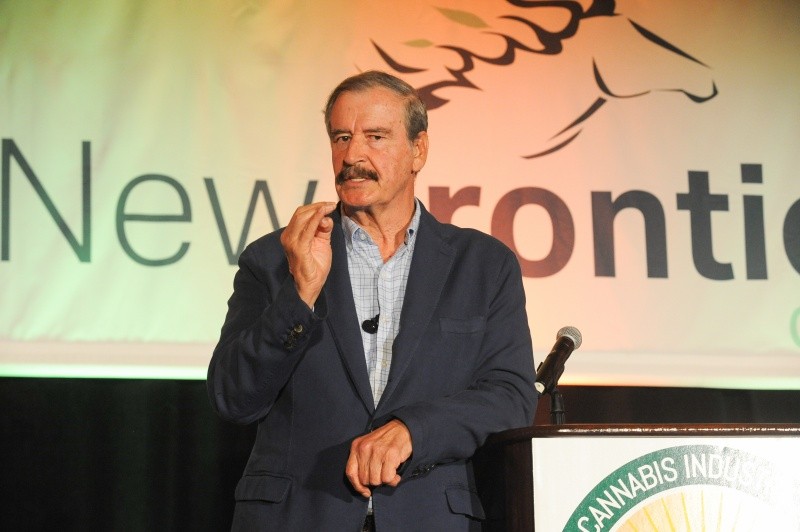 Throughout Fox’s 45-minute speech, he spoke about how much pain people in Mexico have experienced because of the war on drugs, and how legalization is the road to ending crime that causes this pain. He acknowledged the work it took to get the cannabis industry to where it is today, and the industry’s potential.

“You’ve been striving, you’ve been struggling to open things, to change laws, to change behavior, to change image and perception. You’re doing that every day, and you will keep on doing it.” Fox told the audience. “Each of you can start with a small business in California or Oregon or Colorado, but you’re dreaming to become global and you are going to.”

And a moment before Fox’s speech, during a press conference, indicated how far marijuana truly has come: A man stood up and questioned the president’s choice of language. “Why do you call cannabis a drug?” he asked. “It’s an herb, it has flowers, and there are many herbs that have been used in naturopathic healing for millennia that are not called drugs.”

“I’m also ignorant sometimes, as Trump,” Fox responded. “I’m going to call it a flower now, a plant, no problem.”