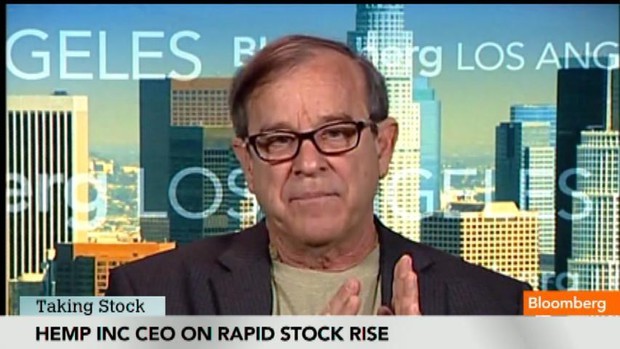 The SEC complaint is one of the biggest legal actions taken against an increasingly brazen and unchecked market in pot securities. Hemp Inc. / Marijuana Inc. CEO Bruce Hay Perlowin of Las Vegas faces securities fraud charges, along with Jed M. Perlowin, 55, of Parkland, Fla., and 64-year-old Barry Keith Epling, of Las Vegas for “a coordinated and fraudulent scheme to sell to public investors millions of unregistered and purportedly unrestricted Hemp securities that were, in fact, restricted.”

According to CourtHouseNews: “Essentially, the men gave hundreds of millions of unregistered Hemp shares to one another, and to their companies, to be sold into the market, the SEC says.”

A June 20 SEC complaint states: ”The defendants' scheme involved, among other things, the use of nominees, phony gifting of stock, bogus consulting agreements, and forged documentation, all of which were utilized to avoid registration requirements and sell Hemp securities.”

"This long-running and profitable scheme resulted in the sale of hundreds of millions of unregistered and purportedly unrestricted Hemp shares to public investors," the complaint states. "The execution of this scheme involved, among other things, purported gifts and consulting agreements that do not appear to have been bona fide and fraudulent statements made to commission-registered broker-dealers.”

“We understand your concern over the recent news about Bruce Perlowin and Hemp Inc. Our legal counsel, which represents Hemp Inc. and CEO, Bruce Perlowin, has instructed us not to comment on any pending litigation,” the company states.

Cannabis could generate $40 billion in economic activity in the U.S. by 2020, and investors are pouring hundreds of millions of dollars into private investments, as well as public companies — the vast majority of which do not meet stringent accounting standards.

Investors lost $23.3 billion in pot stocks in 2014 according to according to data analyzed by Openfolio, VICE reports. Leading investment expert Troy Dayton has told me to avoid pot penny stocks, because “the incentives are screwed up. It becomes more profitable to sell stock than make a company.”


"During the relevant period, the majority of Ferris's revenue and all of Hobbes' revenue came from the sale of Hemp shares,” the complain states.

Hemp Inc. shares crashed this week, down from a high of 20 cents to a new low of two cents today. The company has an alleged market capitalization of $6.57 million.