March 03, 2016
comment
One state that was a shoo-in for legalization in 2016 is now anything but. Maine marijuana law reformers are smarting today after a stunning reversal on their way to the ballot. 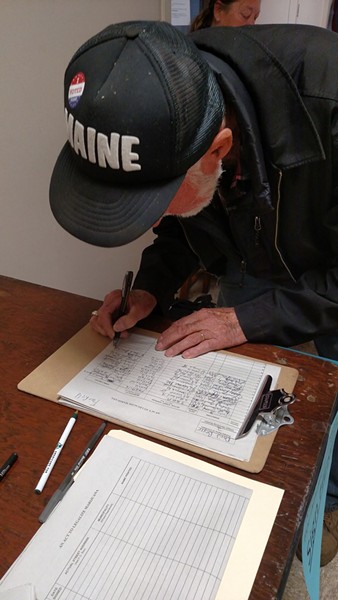 The State of Maine on Wednesday rejected Regulate Marijuana Like Alcohol Maine 2016’s bid to place marijuana legalization on the November ballot — citing a single discrepancy in one signature-gatherer’s handwriting.

The Campaign to Regulate Marijuana Like Alcohol in Maine needed 61,123 valid signatures to qualify for the ballot. But state officials determined this week that RMLA turned in just 51,543 valid signatures. The Maine Secretary of State’s Office disqualified a full 17,000 signatures due to a handwriting technicality.

According to Maine campaign manager David Boyer, the crucial 17,000 signatures were disqualified because one signature gatherer’s handwriting didn’t exactly match up with his/ or her signature on file with the state from five years ago.

Essentially, 17,000 Maine citizens were disenfranchised and the measure disqualified because a paid notary signed his or her name two different ways — one way on a five year-old document on file with the state and a different way when he or she turned in those collected signatures. Talk about a screw-up.


RMLA did not have pictures of the differing signatures in question and would not say if they would be obtaining them. The group did say they are examining their options for appeal.

Boyer did not respond to questions about why the signature count was so close in the first place. Ballot initiative groups are encouraged to submit as many as double the required numbered of valid signatures, because raw signature counts are subject to various types of errors — like a notary suddenly feeling creative with their John Hancock.

“We are very disappointed by the Secretary of State’s determination,” RMLA Maine stated in a release. “Based on documents they have provided, it appears that more than 17,000 valid signatures from registered Maine voters were excluded from the count because the signature of a single notary — whose notary commission has not expired — did not exactly match the signature the state has on file for that notary. We are exploring all legal means available to appeal this determination, and we sincerely hope that 17,000-plus Maine citizens will not be disenfranchised due to a handwriting technicality.”


Pot prohibition supporters crowed over the setback for reforms.

"This is a huge sigh of relief for Mainers and our public health community, especially in a period where we are facing a serious and growing opiate crisis," stated Smart Approaches to Marijuana Maine Director, Scott M. Gagnon.  "The last thing we needed amidst an addiction crisis is increased access and availability to drugs. We are pleased that the Big Marijuana agenda will not be allowed to disrupt our efforts to protect and improve the health of Mainers and Maine communities."

Dr. Kevin Sabet, President of SAM added, "This represents a victory for public health over industry profits.  Despite pouring money into Maine, it appears that the pot industry was unable to get enough real people to sign their petition. The fact that almost a full 50% of the signatures were invalidated casts a cloud over the entire legalization movement in the state."


In other news, California’s Adult Use of Marijuana Act signature gatherers told me this week that they’ve hit the milestone of 25 percent of needed signatures gathered. AUMA has a website now, too, called Let’s Get It Right, California. We assume all signature-gatherers are going to get a "Get It Right" memo about signature consistency.