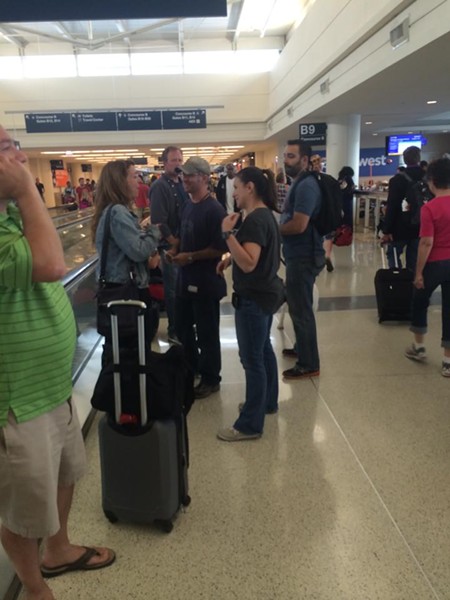 It’s not always easy being in the medical cannabis business, as well-known activist and dispensary owner Aundre Speciale found over the Fourth of July weekend while traveling home from Chicago where she attended the final Grateful Dead concert.

Speciale, whose medical cannabis activism goes back to 1990, said she had a great time at the concert, but she had the misfortune of losing her identification. So the next day, she called the airline and asked what she should do. The airline was very helpful. She was told not to worry but that she should get to the airport a little earlier so she could verify her identity by answering a series of questions.

Speciale arrived at Chicago O’Hare Airport and was directed to a Transportation Security Administration agent who teased her with a couple of good natured Deadhead jokes and then reassured her there was nothing to worry about. “I was very upset and apologetic about the inconvenience and he was actually very friendly about it,” Speciale said.

At first the questions were basic — what’s your name, address, birthday. But then Speciale said she was surprised at the level of background information they had at their fingertips. “At one point they asked what was the name of the adult who lived at your residence five years ago,” Speciale said. “I was a little taken aback, but I answered it. And then they came to the question of what I do for a living.”

Speciale is the director of the Cannabis Buyers Club Berkeley (CBCB), which dispenses medical marijuana. Speciale, who like many medical cannabis activists, adheres to a strict policy of openness, explained exactly what CBCB is and what her role is. “It was all fine,” she said. “The TSA agent remained good natured and everything else was completely normal for losing my identification, which meant I went through an ultra-security, a woman came and went over every inch of my body and my shoes went through the scanning machine twice. Fine.”

But just as Speciale was about to board the plane, her name was called over the public address system. She went over to the desk and four Drug Enforcement Administration agents and a dog were waiting for her. “One was a woman who was being nice and smiling and right behind her were two guys giving me the scary cop look and one of them had this big German Shepherd,” Speciale said. “They showed me there badges and I was a bit surprised because they were the biggest badges I’d ever seen.”


Speciale’s traveling companion, Debbie Goldsberry, who is also an activist and dispensary owner, began to quietly take pictures of the encounter. “I told them I wasn’t going anywhere with them and I wasn’t going to answer any questions,” Speciale said. “As a 25-year activist, it was second nature. Instead, I started asking them questions: ‘Why are you here?’’ ‘Who called you?’, etc. I let them look through my bag and some Chinese food I had and then I got back in line, promptly walked onto the plane and burst into tears.”

Speciale said the DEA was probably notified there was a “pot person” in the airport and they decided to ask as many questions as they could get answers to. “With my history of being upfront, there’s no reason for me to be pulled out of line at the airport,” Speciale said. “But it’s always nerve racking to assert your rights … When you do, it can go either way.”