September 30, 2014
comment
Critics love to say how medical marijuana is a sham — and it’s just a bunch of wasted youth out there going in and out of dispensaries.

But a huge new landmark study shows how ignorant such critics are.

The new study reports that about 5 percent of California adults have used medical cannabis; they come from all walks of life; and that 92 percent of them report that “medical marijuana helped alleviate symptoms or treat a serious medical condition.”

The most commonly reported conditions for medical cannabis use were chronic pain, arthritis, migraines, and cancer. Other conditions reported include: AIDS, glaucoma, muscle spasms, nausea, stress and depression.

“Our study found that adults in California who had ever used medical marijuana were overwhelmingly satisfied with its ability to treat and manage their serious medical conditions,” researchers wrote.

"It is surprising that stigma continues to be experienced by those that utilize medical marijuana. Even though those who are younger and white are more likely to report ever using medical marijuana than their older or non-white counterparts, our study shows that medical marijuana is used by a diverse population and is not limited to any specific age, gender, racial/ethnic or education group.


The Data
The major study is published in Drug and Alcohol Review (2014) and is called “Prevalence of medical marijuana use in California, 2012,” authored by Suzanne Ryan-Ibarra, Marta Induni, and Danielle Ewing for Survey Research Group at the Public Health Institute in Sacramento.

No one knew exactly how many California pot patients are out there, and who they are is not well-known.

So the team used data from the California Behavioral Risk Factor Surveillance System 2012, an annual, random-digit-dial state-wide telephone survey that collects health data from a representative adult sample of more than 7,500 individuals.

If a participant needed more information about what was considered a serious medical condition, interviewers provided a list of conditions as defined by California Senate Bill 420. 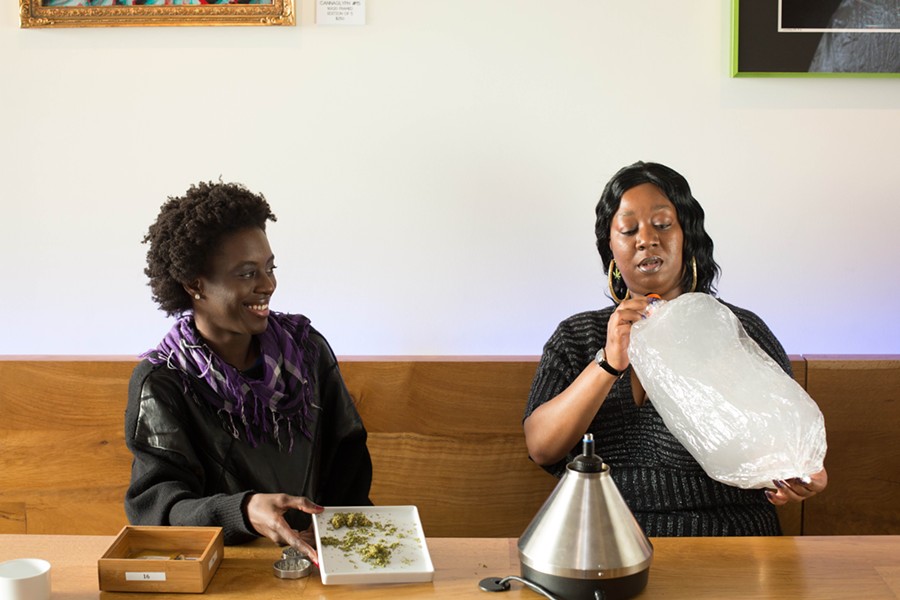 One in Twenty Californians Have Used MMJ
About 5 percent of California adults have reportedly used medical cannabis in their lifetime and “most users believed that medical marijuana helped alleviate symptoms or treat a serious medical condition.”

Cannabis is an ancient herbal remedy for pain, inflammation, and number of other diseases. The federal government prohibits cannabis and considers it as dangerous as heroin or methamphetamine.

“Evidence from randomized controlled trials suggests that cannabinoids can improve quality of life by improving sleep, increasing appetite and reducing chronic pain for people with chronic conditions, especially when these conditions do not respond to conventional treatments. Some evidence indicates an enhanced quality of life, including improved well-being, for users of medical marijuana with chronic diseases,” researchers note.

The most common reasons for use included medical conditions for which mainstream treatments may not exist, such as for migraines, or may not be effective, including for chronic pain and cancer.

Everyone Uses It
"Use prevalence was similar when compared by gender, education and region, with highest use among white adults and younger adults ages 18–24 years, although use was reported by every racial/ethnic and age group examined in our study and ranged from 2% to 9%," the authors found.

Prevalence of medical marijuana use was higher among whites (7%), compared with other race or ethnicity groups, but it should not be overstated. “The absolute difference in prevalence between the racial/ethnic groups is less than three percentage points, which may not have much importance in practical terms.”

“It may be that medical marijuana is still not an accepted way to cope with diseases, such as cancer among older adults,” researchers state.

Interestingly, there is almost no gender gap in use. Prevalence of medical marijuana use was similar for men and women (6% vs. 5%). We’ve met plenty of men doing the buying for their closeted wives or partners.

Medical marijuana use was similar by region, with similar prevalence rates reported for those living in the Greater Northern California region (6%), compared with the San Francisco Bay Area (4%) or Southern California (4%).

Adults with a high school degree or GED were more likely to have ever used medical marijuana use than adults who had completed at least some college or more (7% vs. 5%), but the difference was minor.

Twice as many Californians — 10 percent of the population, or about 4 million people — have used recreational cannabis in the last year, which is double the overall estimate of medical marijuana use.

A Solid Study
The CA BRFSS is a random-digit-dial telephone survey of a population-based, representative sample of non-institutionalized adults ages 18 and older.

In 2012, the survey became more inclusive by sampling cell-phone only households, where more than a third of adults in CA rely on cellular phones for most or all of telephone communication.

Implications
California led the world in 1996 in legalizing medical marijuana, despite avowed retribution from the US Drug Czar and then-California Attorney General Dan Lungren.

Since then, more than half the states in the country have gone on to pass medical or recreational cannabis laws. Still, many California police departments, cities, and counties have not relented in their opposition to Prop 215, claiming there is no such thing as medical marijuana. Places like Fresno County have banned personal cultivation of even a single plant. Even in progressive Bay Area, most cities ban dispensaries.

California failed again this year to regulate access to medical cannabis at the state level. Efforts failed after law enforcement lobbyists tried to pass regulations to punish doctors that recommend cannabis,  as well as punish counties that have already regulated dispensaries, and patients trapped in cities with dispensary bans.

One in twenty Californians — from all walks of life — have used medical cannabis. It’s overwhelmingly helpful to them. It’s despicable that thousands of lawful patients, caregivers, and collectives remain under attack by their own cities and peace officers.